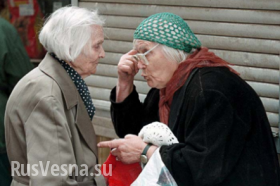 Ukrainian government, which stopped paying retirement benefits to Ukrainian retirees residing on ‘rebel’ territory several months ago (according to Alexander Zakharchenko), confirmed it officially on November 5. Until now, at least some retirees (those more physically able) could travel outside of Lugansk and Donetsk Republics to receive their retirement benefits on the territory of Ukraine.

But the Cabinet of Ministers of Ukraine decided to close that option for Donbass retirees. “We need to do away with the thriving pension tourism”, – said Lyudmila Denisova, the Minister of Social Policy of Ukraine.  Now Ukrainian government wants Donbass retirees to abandon their homes and move across the country, register with the Department of Social Protection, then get a certificate stating that they do not reside on the territory of DPR or LPR and only after these procedures, they will be able to receive their pensions.

Rusvesna: “In order to receive a pension not at the place of residence, senior migrants must within one month provide proof that they really are displaced persons. To obtain this information, they must be registered at the local Department of Social Protection. The need to account for all of them arose because of a thriving “pension tourism”. That is, people just come, get a pension outside of their area, and then go back,” – said Minister of Social Policy of Ukraine.

The same applies to other social benefits:

Vsgliad (November 13, 2014): The Ukrainian authorities do not intend to consider the appeal of the representatives of self-proclaimed Donetsk and Lugansk People’s Republics not to stop transfer of social benefits to Donbass, said Vice Prime Minister of Ukraine Volodymyr Groysman, stating that  . “An appeal from non-existent formations is just as an anonymous letter, it cannot be considered seriously… I am not aware of such organizations. I believe that these are terrorist organizations”, – reported UNIAN . At the same time, Groysman noted that the government’s decision not to fund social payments for territories controlled by militants is final.

“While those territories are controlled by all sorts of impostors, the central budget will not be sending any funds there,” – said Yatsenyuk, according to Interfax-Ukraine.

Meanwhile, there are reports, that Lugansk and Donetsk Republics started to pay out retirement benefits out of their own budgets.

“If all your life you have worked in Ukraine, and paid taxes, it doesn’t matter where you spend your old age – in China, Russia or in DPR, Kiev owes it to you to pay.”

Ukraine will celebrate Holodomor soon, while in 2014 there were numerous recorded cases of seniors starving to death (according to official data in Donetsk), because they are not allowed to access their retirement benefits, for which they worked their entire lives, including while being part of USSR.

Is Kolomoisky more powerful then Poroshenko?

Lugansk Republic may hold a referendum to join Russia