Second day of clashes around Mariupol 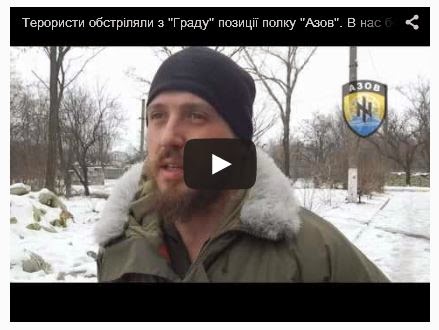 Responding to AFU provocations, bombardment of civilians,
and the dishonest and hypocritical policies of the Ukrainian government, DPR
forces began an active counteroffensive.

An attack was launched in the direction of Gutovo on January
18 at 21:00.

At 6:20am AFU positions were shelled by mortars near
Orlovskoye.

At 7:25 artillery fire was opened in the vicinity of
Gnutovo.

DPR forces are also intensifying their pressure on Azov
positions from the direction of the Novoazovsk road.

Azov positions were hit by rocket artillery for the first
time since September. This was announced by Azov commander, “Kirt”.

No information about casualties in the Azov battalion is
being reported. One could not sense any enthusiasm in Kirt’s video appearance
.

Translator’s Note: So far the operations described look like
either a reconnaissance in force or efforts to pin down and possibly demoralize
Ukrainian forces around Mariupol, either in order to prevent them from
intervening elsewhere, attract reserves away from Donetsk, or prepare the
battlefield for a larger-scale offensive. Time will tell…

The Enemy Within: Right Sector blows up Kharkov courthouse