A video of a Ukrainian radical, the infamous female fighter of the volunteer battalion “Aidar” Vita Zvirukha firing a grenade at a Ukrainian village appeared online.

Shocking video was posted online and was available for viewing for a short time. In the video a Ukrainian woman confidently fires from a grenade launcher at the village Shirokino, cynically asking to record the possible destruction.

The video was soon removed from YouTube, however, many managed to download it, and it became available on other sites.

A native of Vinnytsa, 22-year-old  follower of Nazi ideas, Zavirukha, last year joined battalion “Aidar” with the aim of destroying the Russian-speaking population of Ukraine. The woman was involved in many operations of the militants and burning people alive in Odessa on May 2, 2014.

This time Zavirukha had fun shooting at a peaceful village.

The video shows fires and destruction caused by shelling by forces of Ukraine. The target of the feminazi was the Orthodox Church and residential homes. Previously, she was involved in the arson at Lugansk TES (electric power plant), which was also caught on video.

Then she said: “This is how Lugansk TES burns. And we expect the attack of the Russians. But we saved our cat. Look how awesome everything burns!”

Vita Zavirukha: “Death to the Orthodox” 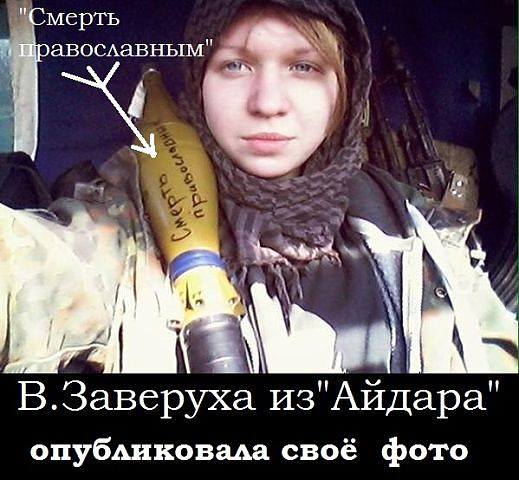