Nuclear blackmail and the probability of a nuclear apocalypse

On September 26, 1983 Lieutenant Colonel Stanislav Petrov prevented a nuclear apocalypse. On this day, the early warning system of missile attack (Missile Warning System) issued a false alarm, confusing sunlit high cirrus clouds with a launch of American intercontinental missiles. That night the unusually high position of the clouds resulted in one of 4 satellites, watching the skies over the U.S., issuing a false alarm. And only logic and calm of Lieutenant Colonel Stanislav Petrov, who decided to accept the responsibility, averted the disaster. At the critical moment he realized that if the missile attack would occur, it would occur not just from one launch pad.

In fairness it should be noted that the errors also occurred in America. The North American Aerospace Defense Command (NORAD), located in the bowels of Cheyenne mountain, the national command center at the Pentagon and backup command center in Maryland several times gave a false warning about the mass launch of ballistic missiles from the USSR. The cause of one incident was the instruction program of action sequence in the event of a missile attack, mistakenly loaded into a computer, which was on battle duty. Another time a computer produced random numbers indicating the number of rockets launched from the USSR, because of an error in the microchip.

Presumably, during the Cold war about 50 nuclear warheads were lost. In some cases, when the nukes were dropped all the fuses worked except the last, which prevented a nuclear explosion. However, there were cases of random emergency detonations, leading to radioactive contamination of the terrain. If such an incident occurred during the times of the cold war, near the borders of the USSR, the consequences would be difficult to predict.

On October 6, 1986 in the Atlantic ocean, 770 kilometres North-East of Bermuda at a depth of 5.5 kilometers sank a Soviet strategic nuclear submarine K-219 “Navaga” (model 667A class “Yankee-1”). The accident was caused by depressurization of one of the missile silos, breaking the integrity of ballistic missile tanks, releasing the fuel components into the compartments and the subsequent rush of sea water inside the hull. Four people died. “Navaga” carried 16 ballistic missiles with nuclear warheads and two nuclear torpedoes.

All this indicates an unstable equilibrium that exists in the modern world. A stable equilibrium was established with the acquisition by the USSR of nuclear weapons as a deterrent against plans to attack the Soviet Union. By August 30, 1945 – before WWII was officially over, the U.S. military has already made a list of targets for the nuclear bombing of the USSR… and even a map was created of the Soviet Union indicating a range of bombers, along with first and second priority targets.

In September – October 1945 the US joint chiefs of staff adopted a Directive No.1496/2, “The Foundation for the Formulation of Military Policy,” and No.1518, “Strategic concept and plan for the use of United States armed forces”, in which the main war target was designated as the Soviet Union. In the directive of the Joint Defense Planning Committee No. 432/d of December 14, 1945,   20 major cities and industrial centers of the Soviet Union were identified for nuclear bombing. The creation by the USSR in 1949 and a successful test of a nuclear bomb, and then, missiles – the means of delivery of nuclear weapons, put an end to those plans. Balance, albeit very unreliable would be restored.

Currently, nuclear weapons can be afforded by not only the most powerful nations in the world. Most likely, on the contrary, when nuclear weapons are no longer a secret, under conditions of blackmail by superpowers, the only guarantor of sovereignty and survival of small countries is the possession of nuclear weapons. High-tech precision weapons and space technologies are too expensive for the poor countries. This leads to the spread of nuclear weapons. One day a critical threshold in the number of nuclear countries will be exceeded. The system becoming too complex will cease to be stable.

The spread of nuclear weapons is fueled by instability in the world. Attempts to “civilized countries” to subdue the weaker states, to start revolutions to replace undesirable regimes, leads to other states seeking to acquire nuclear weapons.

The situation is aggravated by the ambitions of some terrorist organizations such as ISIS to obtain nuclear weapons. In our world, where they say one thing, think another and do the third, the situation does not seem so impossible, but rather depressing.

The system of equilibrium, which was established in 1940’s-50’s is rapidly falling apart. The system now has many variables. Perhaps there is a magic number – the number of countries beyond which the possibility of a dangerous and irreversible transition of quantity into quality may occur. The threshold number of nuclear countries, above which an uncontrolled nuclear incident is more likely to happen. Above which no equilibrium exists. In physics this situation is called a phase transition. This figure is in no way speculative. Purely psychological and technical. Any technology, even high-tech, is capable of making mistakes. Moreover, the more complex the system, the more often it generates errors.

On the other hand, humans purely by their psychological properties are unable to hold in their mind more than 8-9 independent parameters simultaneously. Increasing the number of independent countries not included in the main opposing blocks, possessing nuclear weapons with their many launching pads, superpowers possessing mobile launching pads (on the railway tracks, submarines, air-launched cruise missiles, nuclear artillery) complicate monitoring several times. All this greatly increases the load on the detection devices and the personnel working with this technology. A moment may arrive when the system will produce a fatal error only due to over-complicating the problem. World nuclear war. The first and only.

(If you don’t consider “a nuclear war” – the barbaric and senseless in its savagery bombing of civilians of the Japanese cities of Hiroshima and Nagasaki).

Here you can download the book “Plan of a US nuclear attack on Russia” (in Russian) to see how your city would be affected.

Above: A curious American document – a map of targets for strikes in Russia by category (long-range aviation airfields, missile positions, factories, arsenals, etc.) Clearly traced forecasts of radioactive contaminants, which cities are covered, what doses are received by the population, how many corpses by thousands. How many warheads for which target are required. The data was last updated around 2001, although the names of some targets date earlier. Quite informative, especially in the framework of construction of missile defense in Europe, for a general overview about American plans.

And here was published map of hypothetical nuclear attacks by Russia on America. An attack of 2000 warheads assumes the first strike is by the Russians. If the U.S. will strike first at Russia, thereby limiting the Russian arsenal, then the Russian counterattack will be 500 warheads. This map was created using data from FEMA and the National Defense Council: 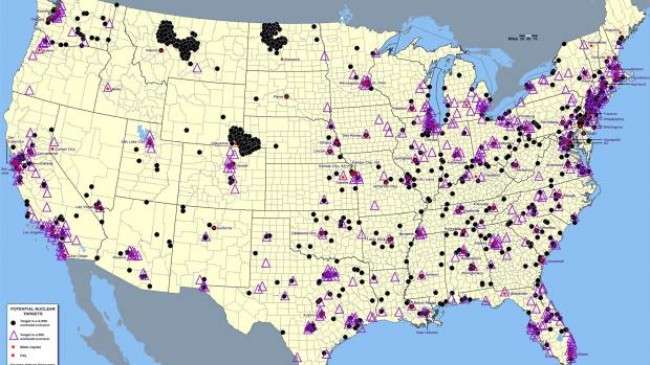 Kolomoysky is holding Ukraine by its “Privat” parts