Alexander Sobyanin,is the head of the strategic planning service of the Border Cooperation Association

1. The offering of Nemtsov was sacrificial, of course. But this does not mean that Nemtsov was sacred during his life, it only means that the sacrifice was intended to make it impossible that any Yashins, Kasyanovs and Navalnys would not try to jump off the military train (Kasyanov already tried to escape, because he used to be Prime Minister and understands better then Navalny how easily they will be flushed from the board game of life).

2. The murder being next to the Kremlin, Red Square, St. Basil’s Cathedral – all that a Texas housewife knows about Russia, is collected in one picture. Relying on hard video-photo bundle of “Views of the Kremlin = murder of opposition politicians by Putin’s regime”, the Americans will bring the Germans and the French back in line, because they, after the Minsk agreements have relaxed to much and began to dream about restoring relations with Russia. No way, dear Democrats, it will not fly. The Germans and the French and other Europeans now will be forced to drastically strengthen sanctions against Russia (i.e. to stab themselves with a knife).

3. An analyst who goes by the name of Brzezin Zbigniewski made a good case for why the US is behind Nemtsov’s murder [The analyst under the alias of Brzezin Zbignievsky publishes texts in English, which appear as translations from Russian. Clearly his name is intended to draw curiosity and attention, and although his alias doesn’t sound serious, his analysis doesn’t lack depth and intellect. Here is his year-old fortelling interview about Ukraine before the Sochi games -KR]

4. The States know that it is impossible to overthrow Putin-2015 in a square. So what do they want at the minimum and maximum? At the minimum, the liberal “creative” infantry of Kasyanov will fall under the batons of the soldiers of the Dzerzhinsky division (in the worst case, best case – the police will have time to stuff them into police trucks), that is if they will manage to get at least 50-70 thousand people in Moscow (very doubtful). Kasyanov, Sobchak and Yashin and their company have shed tears, but have no choice – will cry, but the climb on the cactus of Russian security forces. Too late to get off the hook. I have met several times in the corridors of government offices and in public forums with Kasyanov, and I am sure that he is so sly that, unlike the liberal youth, will find a format “to climb like a hedgehog,” and to be at the right time in the bushes with diarrhea. Sobchak is safe because she is odious and because she is under the personal security umbrella of the former subordinate of her father. Also safe is Kudrin – he’s got a special niche in the dialogue of American money with the Russians. The rest of the liberals don’t have the umbrella from the lead rain.

5. There is no point to look deep into the death of Boris Nemtsov, there are no secrets. Nemtsov was a pro-Western liberal. He is gone. Regarding the liberals – if they are not pushed under the batons forcibly, then in six months nothing will remain of their supporters, so sluggishly they protested in 2013-2014. A sacrificial offering for a decisive Kremlin siege by the liberals – is just an information veil for the world. The real prize – is the Transatlantic Trade and Investment Partnership, a legal enslavement of the EU economy by American corporations. The sacrifice of Nemtsov – is a cover operation. The United States in the case of forcing Europe to the Transatlantic Pact will receive not a limp Khodorkovsky (who is not trustworthy enough), but a normal reason to force the Germans and the Europeans to get back on the battlefield and strengthen the sanctions of the West. I.e., to subject the economies of Germany and France to the retaliatory sanctions of Russia. Further, without options – Russia will survive without German cars, but EU without Russian resources … “no way, Jose!”

6. The return of Deutschland to the war ring of sanctions with Russia is the main motive; that is, it will already be a big step towards a transformation into Nazi states and preparation for the “neue Drang nach Osten”. After the signing of Minsk-2 the Germans and the French got an illusion that it is possible to avoid the Transatlantic Pact and soften Russian sanctions. Not so – Russia has no occupation forces, but Germany and France do. The preparation for whipping Europe with military operations (it’s not Ukraine!) started by Anglo-Saxons since 2012, i.e. has nothing to do with Nemtsov. The goal is to extend the life of the United States by consuming the economies of the EU and Japan.

7. The wonderful thing about the Transatlantic Pact is that on their side all the resources of the US Government, the FED, the banks and corporations are engaged in negotiations, and from the side of the occupied Europe – only officials of the European Commission, and even (!) and exclusively non-publicly. I.e. German banks and corporations are practically not involved in the discussion of their own enslavement.

8. If we add that the money of the Fourth Reich came back and keeps coming back (pushed out by force by Finintern!) from the United States to Deutschland, then a picture emerges of a sharp acceleration of nazification of Deutschland. First, they will be forced to bump heads on the Russian fist, all the money will be pumped into the United States via the Transatlantic Pact, the German economy will be filled with the toxic American securities worth trillions of dollars…

And then they will be pushed to an anti-American, anti-banking, anti-oligarchic (and, of course, anti-Russian) revenge of the German Nazis. And this will be, of course, not the boys in leather jackets circa 1960-1990’s. The future “NSDAP”, which is already financed by the Anglo-Saxons and the German corporations, who are paving their way to power, is already on the map – it is the AfD party. So the only thing that the Putininsts can (and are doing!) is funding the right-wing parties in Germany, Italy, France, Greece, and Great Britain themselves: 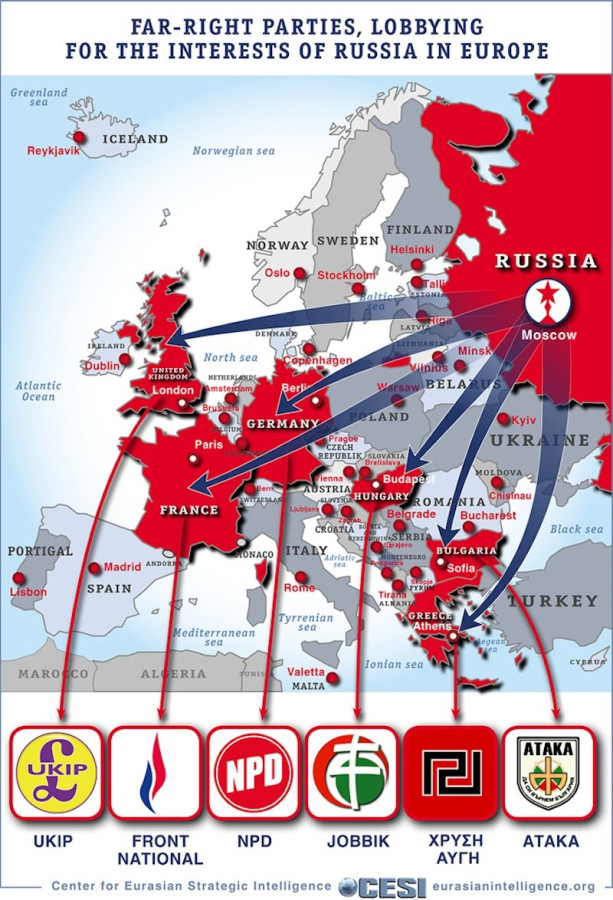 The figure of the funding of the right wing parties comes from here:

Alexander Sobyanin – A world war will begin in the next three years. Vyacheslav Shemansky // Radio.SC. 08.12.2014

8. The same scenario is prepared for Japan (Fukushima is not an accident):

“Republicans in congress are eager to work with the Obama administration to fast-track the passage of the Trans-Pacific Partnership (TPP). If you have never heard much of the Trans-Pacific Partnership – that’s part of the problem right there. It will be the largest trade deal in history, involving countries, stretching from Chile to Japan, representing 792 million people and accounting for 40% of the world economy. Yet it has been devised in secret – lobbyists from America’s biggest corporations and Wall street’s biggest banks have been involved, but not the American public.

The pharmaceutical industry, for example, gets stronger patents, delaying cheaper generic versions of drugs. Big corporations and Wall Street get an international tribunal of private attorneys outside any nation’s legal system. They can order compensation for any lost profits that result from nation’s regulation. That means even US corporations can challenge any US government regulation, they claim unfairly diminishes their profits, say – laws that protect American consumers from unsafe products or unhealthy foods, that protect workers, block toxic emissions or prevent another tax-payer funded bailout of Wall street.

The Obama administration says US trade deal will boost US exports, but the deal will also allow American corporations to outsource even more jobs abroad.

Another words – it’s a Trojan horse and a global race to the bottom giving big corporations and Wall Street banks a way to eliminate any regulation that gets in the way of their profits.

Right now they are trying to get something called “Fast track authority” so this massive giveaway can pass without any public review or power to amend.  So we have to say loud and clear – NO to fast-track and NO to the Trans-Pacific Partnership!”

To further understand the upcoming events of forcing Japan into a Trans-Pacific Partership:

“If anyone has stopped to ask just why global central banks are in such a rush to create inflation (but only controlled inflation, not runaway hyperinflation… of course when they fail with the “controlled” part the money paradrop is only a matter of time) over the past 5 years, and have printed over $12 trillion in credit-money since Lehman, the bulk of which has ended up in the stock market, and which for the first time ever are about to monetize all global sovereign debt issuance in 2015, the answer is simple, and can be seen on the chart below.

We have written on this topic on countless occasions in the past, so we will be brief: either the Fed inflates this debt away, or one can kiss any hope of economic growth goodbye, even if that means even more central bank rate cuts, more QEs everywhere, and stock markets trading at +? while the middle class around the globe disappears and only the 0.001% is left standing.

Finally, those curious just how the world got to this unprecedented and sorry state, this full breakdown courtesy of McKinsey should answer all questions.” 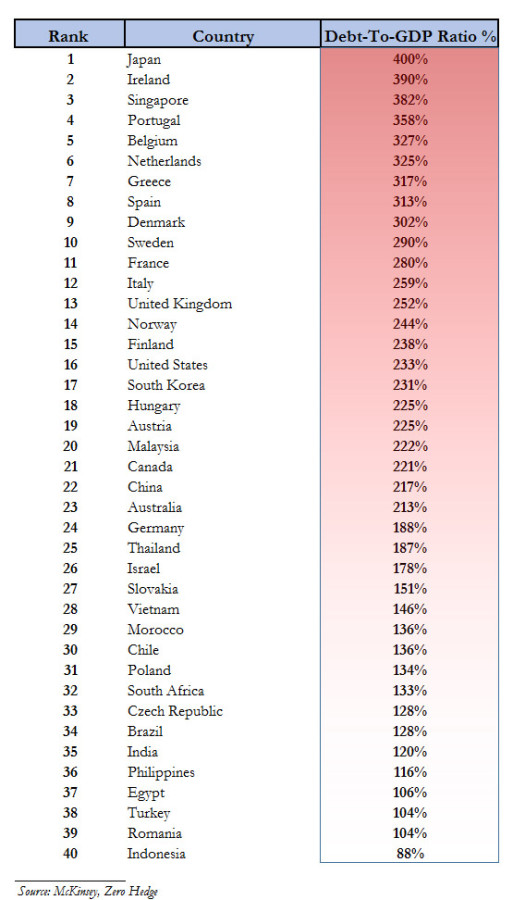 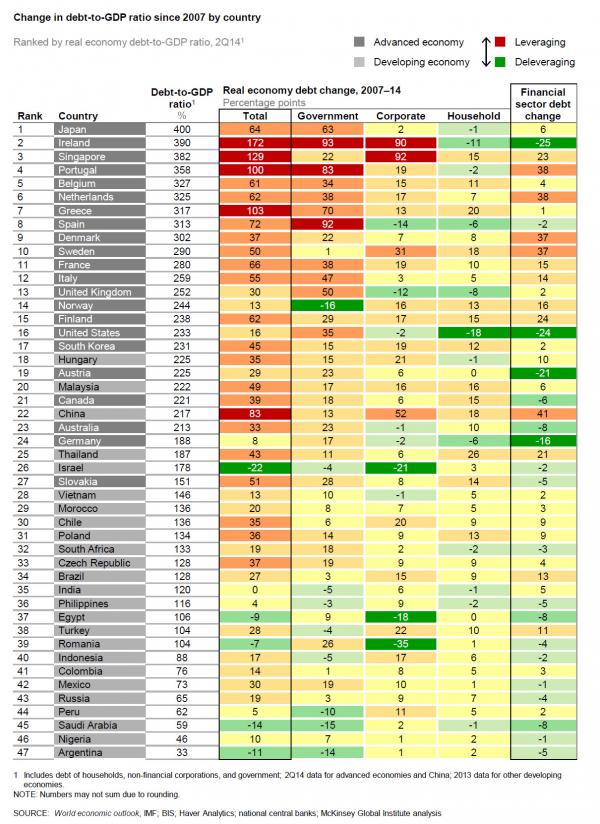 9. The daughter of the owner of “Nezavisimaya Gazeta” wrote an interesting article about TTP:

Varvara Remchukova: “Trans-Pacific Partership: goals, challenges and perspectives. The stand-off between the US and China births a new intergrational monster”

10. The enslavement of Japan based on the same scheme (China has no occupation forces, cannot be forced; in Japan there is) will happen a bit later and, partially, in parallel with the saddling of Deutschland. The goal is the same – first to plunder the Japanese, then to put them on rations (with their zero growth already), then push to militarization and revanchism.

Whose idea was it for Nemtsov to walk across the bridge, anyway?