The invincible Ukrainian soldier survives against all odds (Video 18+)

Remember, two weeks ago everyone was talking about a video, where a [Ukrainian] truck with the wounded blew up on a [Ukrainian] mine?

One of these soldiers was thrown by the explosion from the truck, and spent more then three days on the ground, waiting for help. In the end, his feet and hands were amputated, but he survived.

“Vadim Sviridenko is a medical aid from the 128th mountain infantry brigade. During the fighting in Debaltsevo he provided first aid to the wounded. One day, he was wounded by a shell of a tank and received shrapnel wounds in his thigh and forearm, along with his commander he was supposed to be taken to the hospital in Artemovsk. On the road, at night, on February 16, the convoy was ambushed. First they were fired with mortars, and when the surviving soldiers moved to a truck, their Ural exploded on a mine so that all the wounded were tossed one and a half meters in the air, and some were thrown overboard. The temperature was -20C’. With each hour fewer survivors remained. Soon the only survivors left were  Vadim and his commander.

Only on the fourth day, which he had spend with no warm clothes and food, DPR recon group came across the spot. Vadim was sent to Donetsk and provided medical assistance.

Then he was detained. After the exchange the doctors recorded the fourth, most severe level of frostbite. In Kiev Vadim’s both hands and both feet were amputated.

Psychologically, Vadim is beginning to come together. He has a pregnant wife and a great desire to lead a normal life. 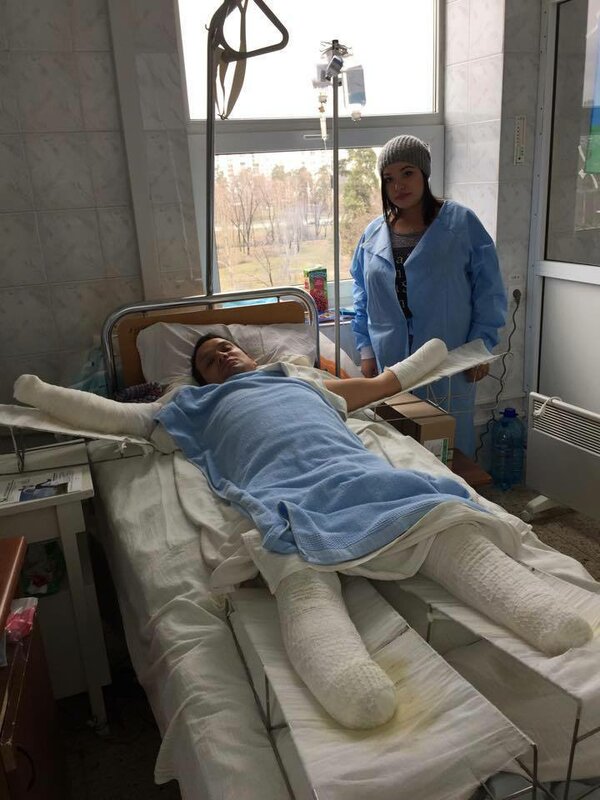 Vadim Sviridenko: “The entire column was destroyed in the ambush: Kamaz, Ural ad two BMP’s. All the wounded died. I asked my commander not to sleep. Two times I woke him up, the third time I could not wake him up. I ate snow, I found some dry meals on the ground. I can’t say I was treated badly [by DPR]. They helped save my life. I used to do a lot of sports, and I had a will to survive”

“Pre-Revolutionary Situation” in the UAF

Nemtsov’s killer was hired by the commander of Dzhokhar Dudaev Battalion in Ukraine, Adam Osmaev