Russia began to sew the post-Soviet space in Transcaucasia

On Wednesday, February 25, the government sent the President of Russia Vladimir Putin a proposal to sign between the Russian Federation and the Republic of South Ossetia (RSO) the Treaty of Alliance and Integration. The draft document attached to the decree of the government, was approved by the Ministry of Foreign Affairs, associated agencies, and the South Ossetian side. The essence is in the actual integration of an independent South Ossetia following Abkhazia into the Russian legal, military and socio-economic space. However, the integration of South Ossetia and Abkhazia is just the beginning. Russia will have to continue southward to the borders of Armenia, and all the necessary conditions are coming together.

According to a source of  Lenta.ru in South Ossetia, the Treaty of Alliance and Integration can be signed by Vladimir Putin and the President of South Ossetia Leonid Tibilov in the near future. [already signed after this article was written – KR] “Everything now depends only on the adjustment of schedules of heads of state”, – said the source of Lenta.ru. Based on the document, the parties agreed on:

Although the Russian-Abkhazian and Russian-South Ossetian contracts are fairly generic (specifics will be ironed out under separate inter-agency agreements), the independent states are de facto included in the Russian national space. The work of local government agencies, security agencies, ministries and departments will proceed according to Russian standards at all levels and will closely fit into the structure of governance of the Russian Federation. Subsequently, the Russian customs and border crossings can be transferred to the boundaries of the new republics with Georgia. In mid-February, after a meeting with the President of the Republic of Abkhazia (RA) Raul Khajimboy, the Russian presidential aide Vladislav Surkov, responsible for relations with the Republic of Abkhazia and the Republic of South Ossetia, offered to remove the border between Russia and Abkhazia. If such political decision is taken, it will also affect the border with South Ossetia.

However, the situation in Transcaucasia is such that the RF will have to continue to move South due to serious security threats. On the one hand, official Tbilisi is trying to establish a dialogue with Moscow. On Thursday, February 26, a meeting with Deputy Minister of Foreign Affairs of the Russian Federation Grigory Karasin and the special representative of the Prime Minister of Georgia on the settlement of relations with Russia, Zurab Abashidze, took place in Prague. The discussion was going to be (among other strategically important for the Russian Federation questions) about the opening of the railway between Russia and Georgia through Abkhazia and transit through the Transcaucasian highway and South Ossetia under the mediation of the Swiss monitoring company SGS.

The possibility of such transit was agreed on several years ago. On the other hand – Tbilisi does not reject active cooperation with the U.S. and NATO. In particular, NATO plans to create a training center and conduct joint military exercises. In mid-February, the Russian Foreign Minister Sergei Lavrov said that Moscow will take action in response to attempts to incorporate Georgia into NATO. According to him, these processes are already underway and threaten stability in Transcaucasia.

It is not necessary for measures to counter NATO in Transcaucasia to be exclusively military in nature. In the Republic of Georgia there are plenty humanitarian problems that are worth paying attention to. In the early 1990’s the inner regions of Georgia, including Trialeti Ossetia, were abandoned by tens of thousands of ethnic Ossetians. Later Ossetians were pushed out to Russia from Kazbegi district. The need to ensure access to ancestral villages has been repeatedly voiced, in particular, by organization “Daryal”. The territorial issue of Truso Gorge and Koba Basin (currently part of Kazbegi district of Georgia) was raised in the fall of 2014 by the former President of South Ossetia, Eduard Kokoity.

The prospect of NATO’s presence in Georgia is not welcomed by the Javakheti Armenians (Georgian region of Samtskhe-Javakheti). “We together with the local Armenian population after the withdrawal of the Russian military base announced Javakhk a demilitarized zone. Georgia’s membership in NATO is associated by the local population with Turkish military expansion“, told Lenta.ru the President of Javakheti Diaspora of Russia, Aghasi Arabyan. Javakheti Armenians welcome the expansion of the Russian-South Ossetian and Abkhazian-Russian cooperation. “In our opinion, from a strategic point of view, the closer the Russian border is to Javakhk, the safer it is for the Armenian population living here. From economic perspective it is a possibility of favorable trade and improvement in investment attractiveness,” – says Arabyan. 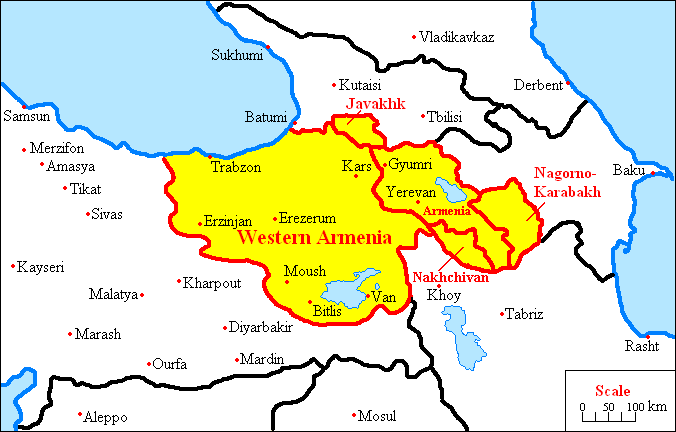 Other national minorities of Georgia see their future with Russia. According to Vano Machavariani, former foreign policy advisor to the President of Georgia, Georgy Margvelashvili, some residents of Akhmeti and Kvareli districts of Georgia, who have relatives in Dagestan received Russian passports. This information was confirmed by a Russian expert working in the North Caucasus district to Lenta.ru.

Mingrelians in Western Georgia are focused on Abkhazia and Russia as well. About 60 thousand Mingrelians live in the Gali district of Abkhazia, and many of them, in accordance with the Treaty of Alliance and Strategic Partnership, will have the opportunity to apply for a Russian passport. A significant proportion of them live in two states and virtually all have close relatives in Georgia. Mingrelian activists are concerned about preservation of the national language and culture.

If the institute of bilateral treaties between Russia and the newly independent states in Transcaucasia is successful, then the same or a similar form of contractual relationship may be selected for cooperation with other regions of the Republic of Georgia which will oppose militarization and involvement in NATO projects.

KR: The issue that the many in the West fail to understand is that former soviet republics are not limited to their majority ethnicity. Many of these republics are a soup of smaller unique ethnicities formed over centuries.


Some of these minority nations in the former Soviet Republics are more threatened by the new majority of the recently independent host country, with which they are left face to face, then by Russia. The inter-ethnic issues long buried by of the mighty Russian Empire, and its successor – the USSR, were released centuries later from the rubble.


Where Russia has been a historical guarantor of peace and security for these small nations, they once again look to Russia as their only savor in issues of cultural preservation and territorial rights. This becomes more prevalent where the host country assumes a new role of a cultural aggressor. A country does not need to be the size of Russia or USA in order to have imperial and predatory features.


In a way, a Eurasian Union can best solve the inter-ethnic issues by assuming the former peacekeeping functions of the Russian Empire and the USSR.


Geography is destiny. The question is, how long can Georgia resist its historical and geographic destiny?

10 Major accomplishments of the age of Putin