“And the light shineth unto the darkness; and the darkness dissipated.” Ukrainian nationalist ideology, then and now

Translated from Russian by Alexey Tatu

I wrote a year ago about the meaning of the Nazi slogans, used during the Euromaidan, (http://varjag-2007.livejournal.com/5954821.html)

It has already been noted that the Euro Maidan, unlike the “Orange Maidan” of the year 2004, is different due to the addition of hysterical Russophobia and anti-Semitism. I once wrote that the origins of this Russophobia and anti-Semitism lie in the fact, that the foundation of ideology of the neo-nazi clique that came to power lies in the ideology of the Organization of Ukrainian Nationalists (OUN). Recall the famous quote of the organization’s Deputy Stepan Bandera, and Yaroslav Stetsko (http://varjag-2007.livejournal.com/4674683.html):

Translation: “Moscow and Jewery – are the greatest enemies of Ukraine, and spread the corrupting international Bolshevik ideas … I stand for the position, of the extermination of Jews and the feasibility of transferring to the Ukraine, the proven German methods of exterminating Jewry … ( and here S.Stetsko finished by hand the words: “and excluding their assimilation into the society”)

I went to Israel, to speak at a Knesset regarding the flourishing of neo-Nazi ideology after the victory of the junta in Ukraine, I visited the Yad Vashem Museum. When I got there I was literally shocked – how the modern Euro Maidan, to the very last detail – its promotion, its unanimous approval of different social solutions, slogans, actions, among other things – was identical to the Nazi Maidan.

Today the slogans of the Maidan “Ukraine above all!” and “Ukraine for Ukrainians!” are mutually cheered on by the leaders of the European Union and the United States. They all come echoing back – through the times, of the same slogans of those convicted in 1945, the year of the Nuremberg Tribunal Trials.

I have already published a leaflet of the “Organization of Ukrainian Nationalists (OUN)”:

“You are the bearers of the Organization of Ukrainian Nationalists (OUN), the Ukrainian young, liberate, free and clear your national life in thy land , which does not tolerate:

Today I am posting another leaflet, the flyer of the Organization of Ukrainian Nationalists (OUN) from the archives of the Yad Vashem Museum dated from July 1941. (http://antinazism.blogspot.co.il/2014/04/blog-post.html)

This leaflet shows the Nazi ideology, Russophobia, and anti-Semiticism of the Ukrainian collaborators, and their ideological Neo-Nazi offshoots, that are around today: 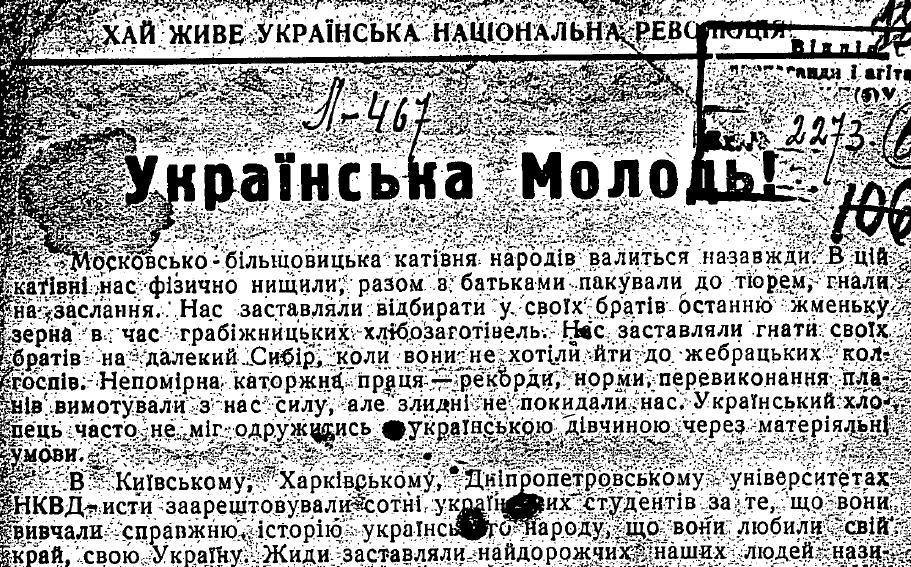 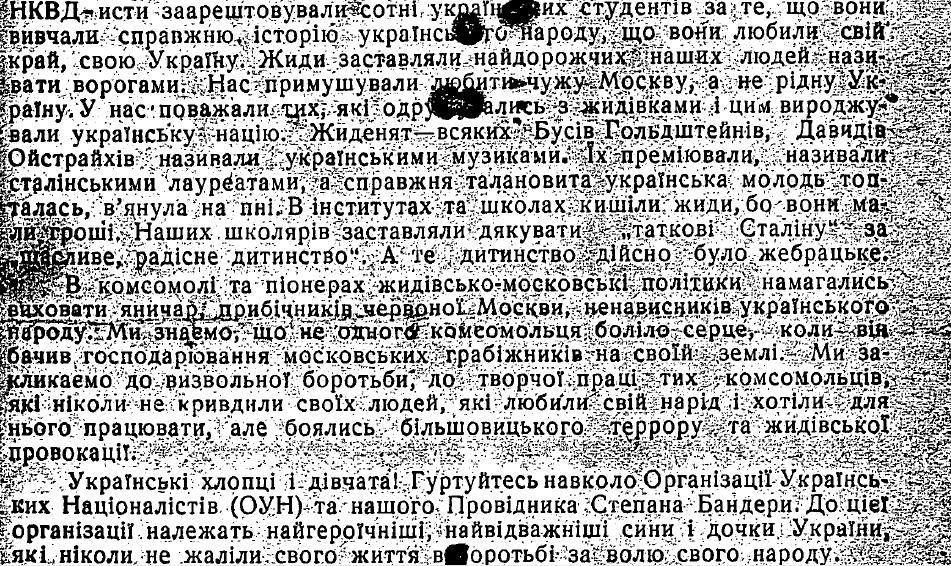 Things of note in the leaflet ,

The Jews forced the special forces to arrest hundreds of Ukrainian students because they didn’t want to give them the right to express their national heritage.

The Jews took away our last grains and are economically strangling us.

The Jewish political heads and elites, especially the ones that are in Moscow are enslaving the Ukrainian people.

UKRAINE IS FOR UKRAINIANS!

The mobilization of the youth through a leaflet is not too dissimilar to today’s mobilization of youth using social media by nationalists and other sinister individuals. All they really need is a common enemy, a threat somewhere in the distance, and they can be an important piston for any political goal. The parallels here are rather striking, as again as soon as the nationalists gain control, the youth and even others in Ukraine can easily be duped into believing whatever the most radical ideology currently exists. Whether they are Jewish or not, as long as they are sitting there in Moscow, and then they could  be X, Y, Z. Whether its due to the repetition of ideas over and over, or their simplicity, it seems that propaganda is not going away anytime soon and it is here to stay.

The Geopolitics of Epistemological Warfare: From Babylon to Neocon