All of Donbass is family to us

All of Donbass is family to us

I caught myself thinking that I’m not reporting about even half of those whom we are helping. These days we’re mainly doing targeted aid. Earlier we were done in only a few days–we delivered most of the food to communal cafeterias and bomb shelters of Pervomaysk. Now, in addition to the old system which is still in place, we are painstakingly assembling lists of the most needy from the village heads–people without shelter, family, children, the orphaned, the injured, etc. And then we deliver aid to them directly.
The geography of aid keeps growing. Georgiyevka, Khryashchevatoye, Vishnyevyy Dol, Chernukhino, Pervomaysk, Stakhanov, Fabrichnoye, Metallist, Krasnyy Luch, Lugansk…These days even a week is not enough. Every day we travel with huge packages, which we have to put together ourselves, house to house, village to village. Forgive me that I don’t report on all of them–it’s very difficult. I alone am responsible for the accounting and the reports on our trips, and I won’t entrust this work to anyone else.
I would like to say that everyone who is under our care is receiving aid regularly. We’re not merely acquaintances anymore.
–Dunya, did you get a haircut?
–How was your trip this time?
And all of Donbass is family to us
So here’s Galina Vasilyevna. Always greets us with an avalanche of kisses. It was already dark when we arrived. We delivered two packages to our Olya, the girl from Pervomaysk bomb shelter who gave us her poems which we published. Olya seemed like a little kid during winter, but now I realize she’ll soon outgrow me. 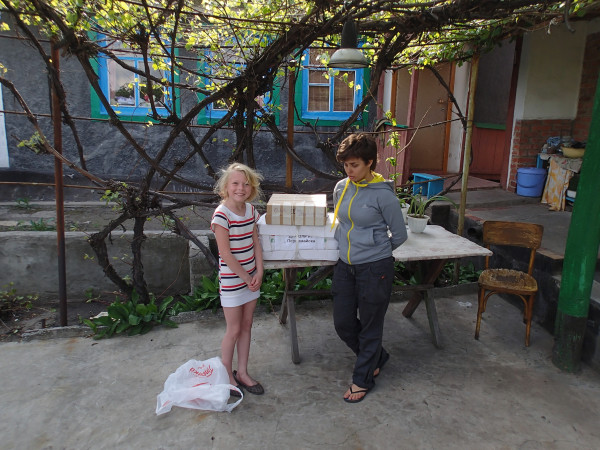 As usual, we dropped by Lyubov Mikhailovna, a heroic woman who lost a leg and an arm during a summer bombardment while cleaning the local farm of the dead chickens. She wasn’t employed there, she was just helping out the city, that hero-woman. I can’t repeat that enough.
Thanks to you, we have been able to collect money for a special wheelchair for the one-armed. We dropped by the Kozlovs in Khreshchevatoye. Nikolay Ivanovich lost an arm during the summer. We brought him food and medicine which he was asking for the last time. Thanks to Lena Zhukova who found and bought everything that was needed. 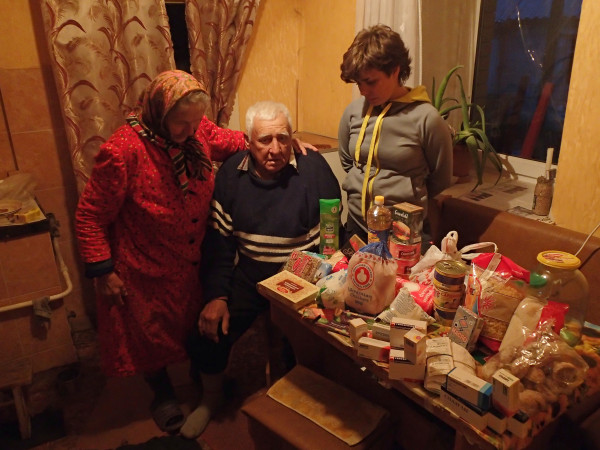 I already wrote about our Kutsenko, but I have to write again.
We’ve visited him several times at the hospital during our last trip.
He’s been discharged. Now we are taking care of paperwork to have him admitted to a retirement home for Great Patriotic War veterans. Many thanks to Zhenya and Lena who took up that cause.
. 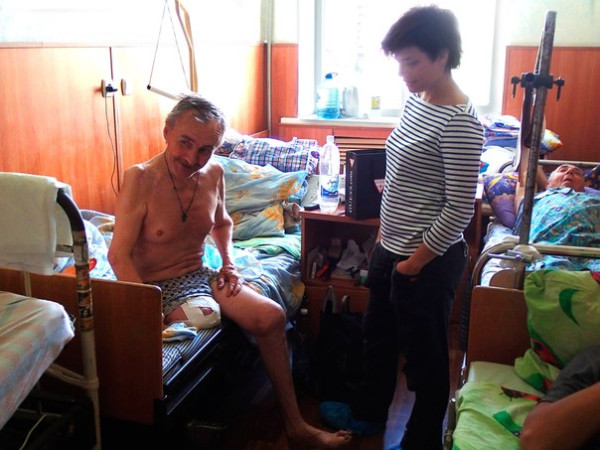 There are many others about whom I haven’t written but whom we are assisting. The bedridden ill of Khryashchevatoye, Fabrichnoye, and Metallist. The single moms of Lugansk, Metallist, and other places.
We are delivering all manner of goods to the orphanages in Lugansk, Krasnyy Luch, the social protection fund, and other services.
I’ll write about them soon! Dunya, the multi-armed shiva, will do it all! 😉
And, of course, many thanks to everyone who is helping us. I hope that when you read these reports, you realize that you have made it possible. 😉
(and why is it that livejournal doesn’t use smilies?)

Best of Fort RussBloggersHumanitarian CrisisJ.HawklittlehiroshimaNovorossiaTerror
0
Share
Subscribe to our newsletter
Sign up here to get the latest news, updates and special offers delivered directly to your inbox.

What you should know about the major global developments of week 21, 2015