This trip was hard. Even very much so.
Starting with a day spent at the customs and the x-ray machine that I had to take my car through.
We experienced unforgettable minutes but the main thing is–we got through and delivered everything.
Ending with the constant side trips. The geography of aid is growing larger and larger–Georgiyevka, Chernukhino, Pervomaysk, Fabrichnoye, Khryashchevatoye, Metallist, Lugansk…
There was a lot of targeted assistance on this trip. It poses an unbelievable burden, especially in the moral sense.
Right off the bat we drove to visit Sergey Vladimirovich in a Lugansk hospital. He was rendered homeless by the shelling of Khryashchevatoye, and to make things worse he suffers from progressive polyarthritis. Following the summer je lived in a barrack in unbearable conditions–no electricity, gas, or water. After we made acquaintance he had a fall and his leg was amputated. Now he’s in a hospital. When we came to visit he did not smile at all.  (Be sure to read the PS concerning Vika!) 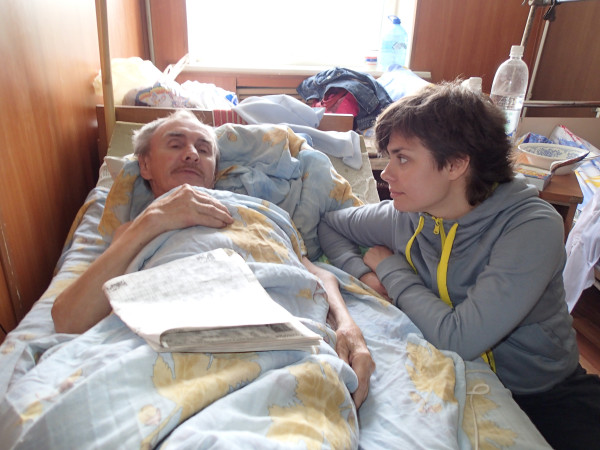 There was a sense of sadness and hopelessness.
–Where should I go live? What am I to do?
His legs don’t support him, he’s in bed all the time
We brought him many sweets, some of which were delivered by Inna Gorova, and medicines.
But he did not even look in the bag.
I got upset. I started to take everything out and offer it to him, all at once.
–What’s that?
–Olives. Never tried them?
–I don’t know. Maybe. I forgot…
Then we left.
And when we came the second time, we decided to put him on his feet.
We were all giggling during that trip. 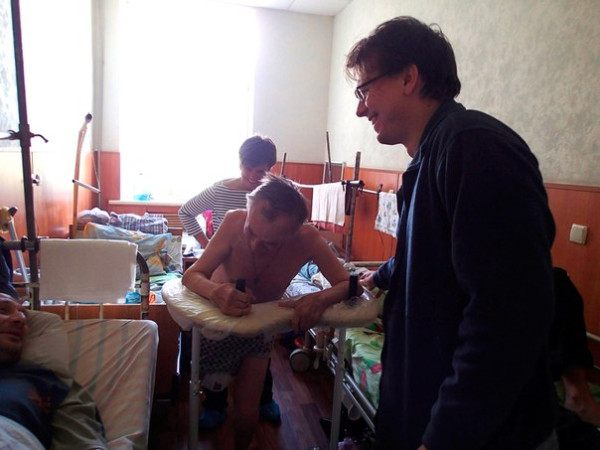 Zhenya brought a special heavy walker on wheels, we moved aside all the furniture–the room is tiny, it’s hard to walk between the beds.
And Sergey Vladimirovich stood up really for the first time since the operation. He was so happy he did not want to sit down, even though it was hard on him since the remaining leg doesn’t work…
His roommates were encouraging him.
–Vladimirovich? Going far? We’ll start sending you after beer from now on!
Everyone laughed. Both we and, more importantly, Sergey Vladimirovich.
And then it turned out he has a sweet tooth from Hell ;))) 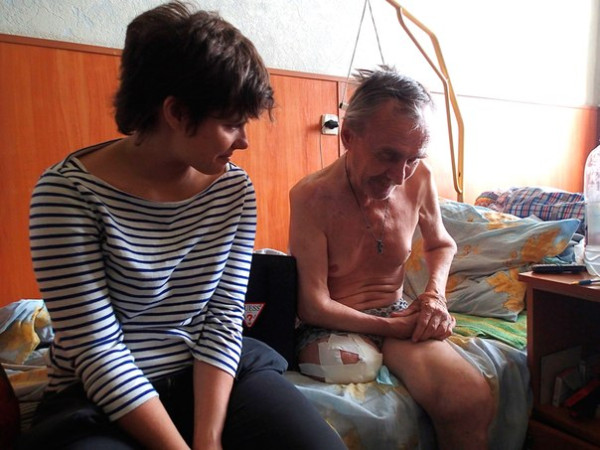 But the most important thing happened on the last day of our visit–we, or specifically, Lena and Zhenya, found him a place to live!
The Geriatric Retirement Home for the Veterans of War and Labor. I’ll write about it separately.
We got in touch with them, and they agreed to take Sergey. We’ll gather all the documents this week, and he’ll be discharged from the hospital.
The home is impressive. Red benches, spotlessly clean, all fixed up, people chatting. It was built a long time ago for the Great Patriotic War veterans, and the repairs were made before all the recent events.
Right now the situation there is not too bad. Although the director, once he found out that we are engaged in humanitarian aid, said he’d be happy to take everything we can deliver. We brought everything we managed to collect on the last day. Mainly household items–powders, diapers, soap, serums, pampers, shampoo, cleaning solutions, etc. A little food and medicine which we received from Moscow volunteers. So the news are even very good!
And when Sergey Vladimirovich found out about this, his reaction was indescribable. 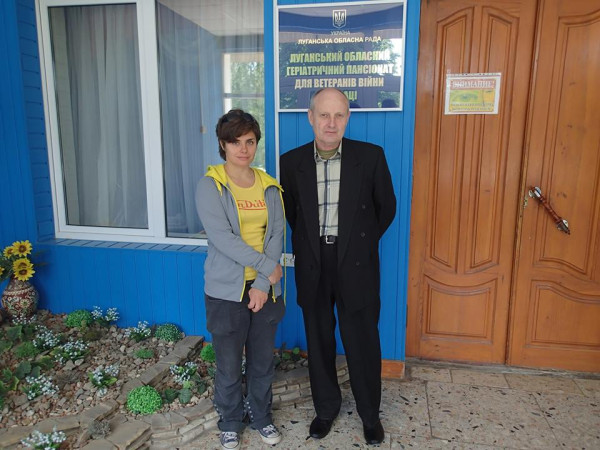 P.S.: There are also good news about Vika, the girl with diabetes. Today she was hospitalized, doctors are examining her. Vika began to eat. Yesterday she was read your comments in which you wrote she was magnificent, and that there would be a collection for her teeth, which made her really perk up! She was very happy with us and your attention. I’ll write more about everything later!

Best of Fort RussBloggersHumanitarian CrisisJ.HawklittlehiroshimalprNovorossia
0 85
Share
Subscribe to our newsletter
Sign up here to get the latest news, updates and special offers delivered directly to your inbox.