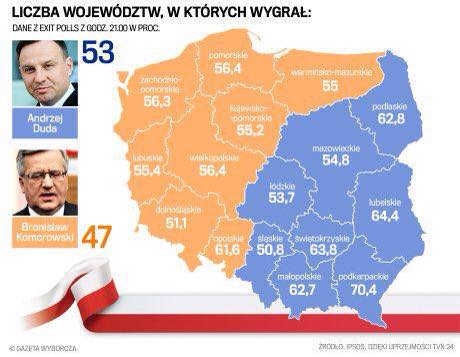 Let’s compare that to the map of Poland’s partitions:

It’s no wonder that all the Russophobes are in the East, where our ancestors kicked their butts.

J.Hawk’s Comment: There’s more to it. Komorowski was no Russophile, either. But there’s a fundamental difference between the two. Komorowski represents Poland’s pro-EU forces, and he views the Ukraine crisis as a great vehicle to raise Poland’s importance within the EU and, to a certain extent, also NATO. Duda couldn’t care less about the EU, though he does view NATO as useful, but only to the point.

But the real difference is in their attitude toward Ukraine. Komorowski (and the wing of Polish political elite which he represents) wanted to see Ukraine as part of the EU without any ulterior motive. It was simply consistent with his pursuit of Poland’s European integration, which in his estimate would be facilitated by a “strong”, “democratic”, and “prosperous” Ukraine (and ultimately Belarus) on Poland’s eastern borders.

Duda, on the other hand, comes from the revanchist wing of Polish politics which wants to see a “Polish Lvov” (and Polish Vilnius, but that’s a story that still awaits its own Maidan). So while Komorowski was perfectly willing to turn a blind eye on the whole Bandera thing, Duda hasn’t shown the same willingness because the two Polish leaders also have a different view of Russia.

While Komorowski viewed Russia as a threat to European integration, Duda views it as a competitor for the control of Ukraine. What form Poland’s control might take, and how far it would extend, is another question. Annexation? Political and economic penetration? And does it mean Duda might be open to a “deal” with Russia over a, shall we say, partition, of Ukraine?

We don’t yet know, and we may never know, because Poland right now and in the foreseeable future is facing an internal problem in the form of a political divide similar to that afflicts Ukraine, with Eastern Poland playing the role of Western Ukraine. Moreover, to implement his internal policies Duda (and the Law and Justice-dominated legislature that will likely be elected this fall, which in turn will give Duda a friendly Prime Minister) would pretty much have to pull an Orban, thus alienating the EU establishment which in turn might force him to reconsider Poland’s relationship with Russia (unless, of course, the US decides to use Poland to fragment the EU, in which case things get really messy…).