The Minister of Foreign Affairs of Russia, Sergey Lavrov during the meeting with U.S. Secretary of State John Kerry on May 12 in Sochi gave him two baskets with vegetables and a t-shirt with the symbols of Victory.

“Lavrov gave Kerry Krasnodar tomatoes and potatoes distantly related to those which at one time were presented to him by the American colleague,” – reported the Russian Foreign Ministry on Facebook. 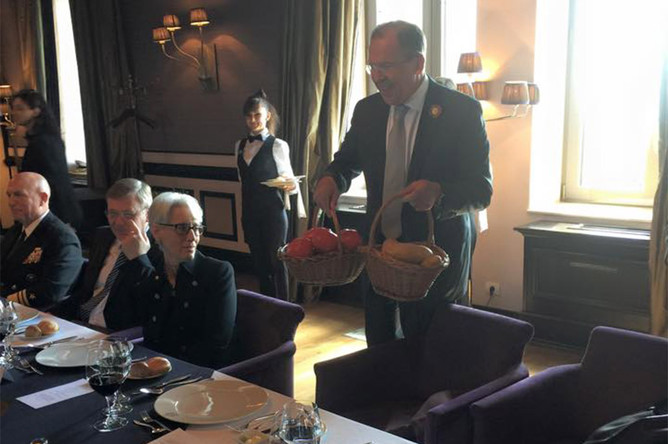 The meeting of Foreign Ministers of the two countries took place on May 12 in the Sochi hotel “Rodina” [“Motherland”!].

Lavrov arrived to the talks with the U.S. Secretary of State behind the wheel a white car “VICTORY”. 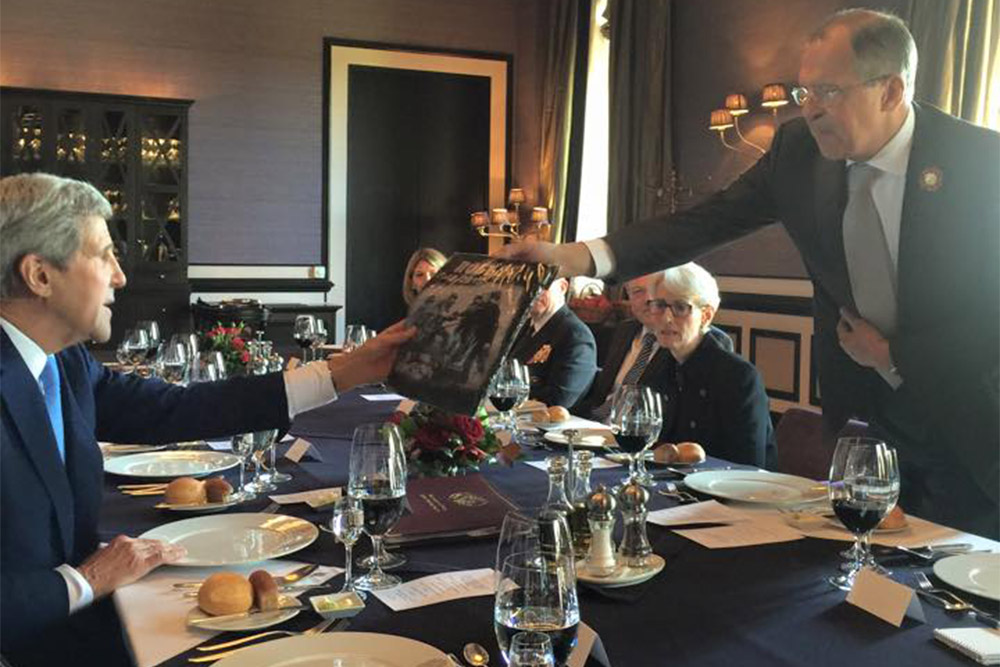 Experts have deciphered the diplomatic signals of Lavrov to Kerry.

As for the arrival of Sergei Lavrov to the talks with his American counterpart in a white “Victory”, the head of the Russian Foreign Ministry has thus revealed that our country will not allow anyone to rewrite the history of WWII, the expert believes: “During the war the Soviet Union lost 27 million, Lavrov thus showed that it is not necessary for other countries in this matter to pull the blanket over themselves and rewrite history. Thus the Minister has demonstrated the leading position of our country, showing off our “Victory”.”

According to Sergey Sudakov, Krasnodar tomatoes and potatoes presented by Sergey Lavrov during lunch were meant to show John Kerry that sanctions imposed by the US against Russia have not worked and American colleagues even failed in this regard.

“John Kerry is a combat officer, he went through Vietnam in his time, and he knows what war is and what trenches are, therefore, accepting a t-shirt with the symbols of Victory as a gift from the hands of Sergey Lavrov, he understands that Russia has won,” – said the expert of American studies. – “With regard to tomatoes and potatoes, the potatoes came to Russia from America, and Lavrov is hinting that Russia is now ready to feed the American colleagues: look, we have everything and your sanctions have not worked. U.S. President Barack Obama says that Russia “is in ruins”, and we at this point say: enjoy our gifts, we are alive, and we have everything”.

Note that in January 2013, John Kerry himself gave Lavrov two potatoes. However, they failed to take root in the Krasnodar region.