Mission Possible: To tear Egypt away from the United States

Mission Possible: To tear Egypt away from the United States

If you were to tell the leader of Egypt’s Maidan back in 2012 and the US State Department favorite Mohammed Morse that instead of a triumphant presidential term he’ll get a coup, a trial, and a death sentence, he would not believe you. Life, however, turned out to be more complicated. If someone were to tell US and Russian analysts in 2012 that within three years of the Egyptian Maidan the head of Egypt will come to Moscow for the May 9 parade and to seek protection from the Kremlin, they’d think you were nuts. And they would be wrong. Russians always come back. And not only after money, as Otto von Bismarck once wrote.

Though, of course, money is important. After a short but memorable rule by the Maidan hordes and their State Department-affiliated curators the Egyptian economy which even earlier did not have bright prospects rapidly faced the possibility of a full collapse. Then we learned something interesting: there aren’t many candidates for the role of the rescuer of Egypt’s economy without attempting to turn it into a colony. Therefore Marshal al-Sisi had the choice of two “counterweights” to US influence. He could choose Moscow or Beijing. Being a smart military man, al-Sisi decided on both, but prioritizing the country which can thwart European attempts at internal intervention, namely high-tech, effective, and inexpensive weaponry. That’s why the al-Sisi’s revealing visit to Moscow, which drove the State Department’s Middle East section into a lengthy depression combined with a prolonged drinking binge.

Putin visited Egypt in February, and that visit was perceived by the Western media, for example The Guardian, as a “thinly veiled sign to the West.” I wonder what State Department officials were thinking when they saw Putin and al-Sisi standing on the Tahrir Square where Egypt’s Orange Revolution began?

Putin’s February visit had a specific consequence: the two leaders agreed to create a Russian industrial zone in Egypt, and that agreement became an important part of Russia’s foreign policy strategy. Russia is once again expanding its markets, and now it’s the state that’s involved, not simply individual firms. We are learning from our friends and competitors, adopting the best practices of Beijing and Washington.

A whole battalion of top Russian officials descended on Cairo this week, under the leadership of the Minister of Industry and Trade Denis Manturov who brought along several governors and a highly representative delegation of businessmen.

The visit’s results are already impressive:

1. Russia and Egypt will trade using national currencies. Right now bilateral trade is at around $5.5 billion annually, but it is growing in both rubles and Egyptian pounds. Any expansion of the ruble zone is good for us. Expanding ruble circulation at the expense of dollar circulation is twice as good.

Russia’s integration projects are becoming ever more active. We have only recently signed an agreement on a free trade zone with Vietnam, now it’s Egypt’s turn. No cookies on the Maidan, no “Eastern Partnership”, no fireworks, and yet Russia is pulling more and more countries into its integration orbit.

3. There is a preliminary agreement on delivering 12 Sukhoi Superjet 100 with an option for another 12, with the deliveries starting as early as the end of 2017.

In all likelihood the leasing will be financed by a special Russian-Chinese fund: “We are working on the matter right now. Only recently, during Xi Jinping’s visit to Moscow we have signed an agreement on establishing a $3 billion fund which will support the delivery of 100 Superjets,” Manturov explained.

If we add the nuclear energy cooperation, Russian oil firms operating in Egypt, and rapid growth in Russia’s grain deliveries to Egypt, it’s possible to say that Egypt is tying itself closely to Russia’s economy and the Eurasian Union. That’s very important, because after the fall of the USSR and the destruction of COMECON the Russian market, even with the Eurasian Union, does not have sufficient demand capacity to ensure its own development. We need to reach every possible market and occupy niches from which it will be difficult or impossible to eject us.

We are clearly learning from China, which means that the Russian industrial zone in Egypt is a major component of the strategy. Once again Manturov:

The first potential resident of the Russian industrial zone in Egypt is Uralvagonzavod. Its General Director, Oleg Siyenko, held talks in Egypt on producing railcars, road construction equipment, and petroleum and gas equipment.

There’s another reason why it’s important for us to establish strong presence in Egypt. Napoleon correctly said that “geography is destiny,” and in the case of Egypt it can be modified into “Suez Canal is destiny.” If we become an important economic and military partner to Egypt, it will give us access to EU’s and Great Britain’s soft spot, which is especially important in the context of China’s New Silk Road concept.

Look at the map of the New Silk Road presented by the Wall Street Journal: 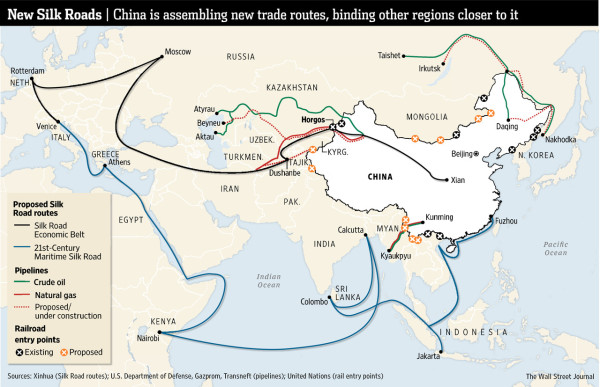 So as not to traumatize its soft and sensitive readers, the main US economic publication is showing only one of the so-called “corridors” of the New Silk Road, the southern sea one (blue line), which is the only large-scale transport route connecting China to Europe. In principle, it’s already possible to deliver cargoes by rail from China to Germany and back, except that the throughput could use some improvement.

Therefore control over the Suez Canal or, more to the point, influence over Egypt, becomes an important geopolitical asset. Depriving the US of its ability to “pull the switch” on trade between EU and China is well worth it, and it’s only one of many benefits of Russia’s strategy in Egypt. Establishing production facilities right on the world’s most active trade route is also a guarantee of good future profits.

Now let’s look at other maps of the New Silk Road, where Russia is not depicted as only a participant of an “economic belt”, but as a country which will host the “northern corridor” of this Chinese megaproject which, as US media acknowledge,
(http://www.usatoday.com/story/money/markets/2015/05/25/oilprice-dotcom-silk-road/27746785/ ),
may radically change the global economy, which is causing existential angst among US experts. 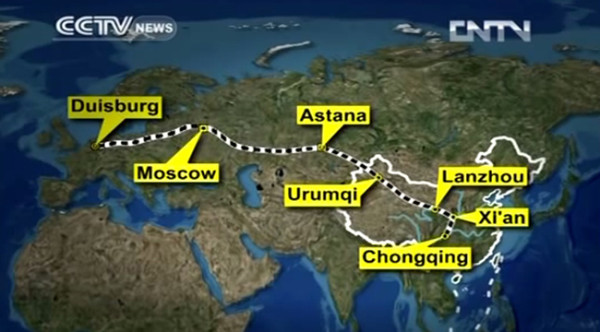 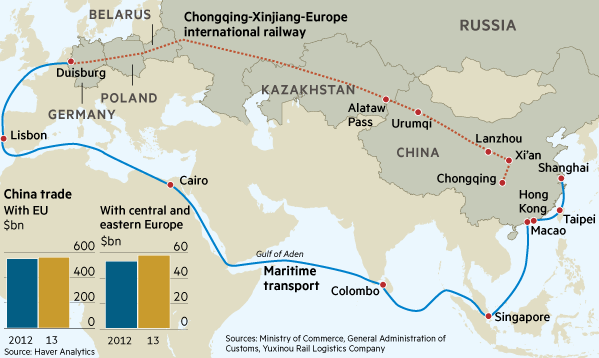 Where’s the beauty of the situation? If Russia manages to include Egypt in its integration projects, “addict” Egypt to its technologies in both the energy and military area and make Egypt part of Russia’s international security system, then both the northern and southern New Silk Road corridors will be dependent on Russia. Of course, there’s the “middle corridor” which may traverse India, Pakistan, Iraq, Syria, Iran, and Turkey, but it has two major disadvantages: landscape and ISIS.

P.S. “And what about Ukraine?”–that question will inevitably appear in comments. Well, maybe the inhabitants of Ukraine should get smart and drink the “European dream” cup to the last drop, but there are good news in store even for them: a “Ukrainian Marshal al-Sisi” is walking the streets of Donetsk. Everything in due time.

AnalysisBest of Fort RussEconomyGeopoliticsJ.Hawk
0
Share
Subscribe to our newsletter
Sign up here to get the latest news, updates and special offers delivered directly to your inbox.

“They have already died”