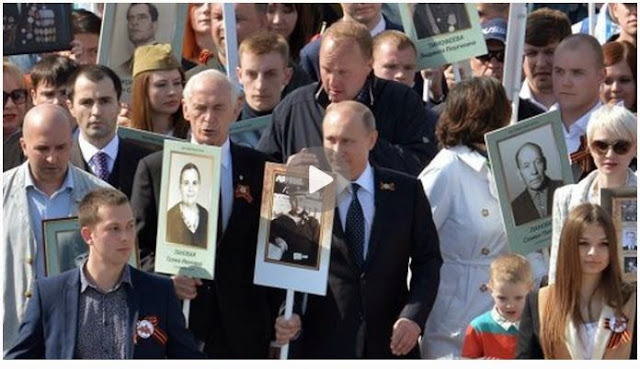 This is the 35th issue of the Daily Brief, with a somewhat changed format. Due to the not-inconsiderable time that surveying the vast Russian blogosphere demands (plus the fact that my un-indicted co-conspirators colleagues read many of the the same blogs I do), the new focus will be the news stories most often shared on the social media (as reported by mediametrics.ru). History and culture stories will receive individual treatment when warranted. As to the ever-popular humor section, it will be replaced by a weekly feature that will collect notable memes and bits of humor from the blogosphere.

Aleksey Pushkov, the head of State Duma’s International Affairs Committee, noted on his twitter account that US and NATO had spent the last 20 years attempting to subordinate the entire world to itself, and that the growing cooperation between Russia and China is a reaction to the Western attempt at global dominance. Pushkov also approved of the playing of the Soviet national anthem at the May 9 parade, noting that since it was USSR that won WW2, it was only appropriate that its anthem be played.

Night Wolves’ ride through Berlin compared to an earthquake

While there were only 30 actual Russian bikers in the group, they were accompanied by a large number of German and even Polish bikers, who made the procession all the more impressive. Not to mention that all the media hysterics concerning the Night Wolves’ ride persuaded the Berliners to turn out in large numbers to see for themselves what all the hubbub was about.

The UN Secretary General also expressed his view that Vladimir Putin had truly earned the love of the Russian people (which is pretty much what he says in English in the video above).

Putin’s latest human-like act (seriously, that still surprises people?) was his joining of the Immortal Regiment, which is a recent initiative promoting demonstrations by Russians carrying the portraits of their ancestors–veterans of the Great Patriotic War. So far 1.5 million Russians have participated in these marches this year alone.

Putin: Russia is ready to restore its ties with Europe

At a meeting with Czech president Milos Zeman, Vladimir Putin regretted the bilateral drop in trade between the EU and Russia, and noted that Russia was ready to return to better relations with Europe, even though it was Europe that bore the responsibility for the deterioration. Zeman, in turn, expressed confidence that the EU would soon lift its sanctions against Russia.

The “Reichstag” captured during the Groznyy Victory Parade

The parade also featured a group of “German POWs” who were dropping their weapons and even a mini-reenactment of the 1946 Victory Parade, complete with the throwing down of German battle standards. Elements that for obvious diplomatic reasons were not included in the Moscow version of the parade.

Newly released information indicates that the vehicle weighs under 50 tons, and is powered by a 1500hp diesel, which makes it the most dynamic main battle tank in the world today.  It represents a major technological leap forward that would take other countries many years to compensate. In fact, no NATO country has an active MBT research and development program under way right now.

The Tula-based KB Priborostroyeniya-designed short-range air defense system is in such a high international demand that the plant has sufficient orders to keep it running at full pace through 2019.

The history of the legendary PPSh

The Shpagin-designed legendary PPSh-41 was as iconic a Red Army weapon during the Great Patriotic war as the Kalashnikov during the Cold War and the contemporary era. Rugged and reliable, though short-ranged, it was the most widely produced automatic weapon of WW2. A million of these weapons are still kept in storage in Russian arsenals. Because you never know…

This is one of the highest-profile scandals in Russian politics today. Yevgeniya Vasilieva was a Ministry of Defense property manager under Shoygu’s predecessor Serdyukov (who also a target of an investigation), and was just recently sentenced to five years in prison for fraud of a sum of 1 billion rubles. Serdyukov was a highly controversial Defense Minister for his preference to cooperate with Western defense industry firms. The Mistral contract, for example, was concluded during his tenure at the MOD.

Thousands of Odessans are chasing out “Banderite devils”

During the May 9 celebration in Odessa, thousands of people were chanting “Fascism won’t pass” and “get out of Odessa, Banderite devils.” Moreover, they violated the Odessa authorities’ ban on St. George’s ribbons and red flags (video at the link).

According to a witness of the speech, this was a spectacle nothing short of the surreal, because while the audience looked, well, like the photo above, Poroshenko was in the meanwhile extolling the various ethnic Ukrainian members of the Soviet military, including the fighter ace Ivan Kozhedub, and their contribution in defeating Sauron Hitler. Judging by the less-than-enthusiastic applause, it doesn’t appear to have been the speech his audience was expecting, and Poroshenko apparently looked like he was afraid of the very words he was speaking. But then again, given that he increasingly has to worry about his international audience, one can understand his dilemma.

Andrey Makarevich beaten up in Kharkov by a Ukrainian battalion commander

Andrey Makarevich is a Russian artist who will probably never get his very own Music Video Wednesday on this blog due to his fashionably anti-Russian views on pretty much any given issue. Makarevich is currently on a concert tour in the “free Ukraine”, and during one of the concerts a UAF battalion commander decided to exercise a bit of freedom by punching Makarevich in the face and then breaking a guitar over his head. No word on what prompted such a violent outburst. However, Makarevich is continuing his tour.

The banner which reads “We’ll take back Lvov and kill Banderites” was prominently displayed during the Poland-Ukraine rugby match in Lublin, Poland. Even a police intervention failed to take it down.

Stalin’s portrait brought before the Eternal Flame in Kiev

This, plus the fact that in Kiev, too, several marchers ignored the official ban on the St. George’s ribbon, led to some verbal exchanges but no violence erupted. A sign that the strength of the nationalist ideology is beginning to ebb?

OSCE noted during its most recent round of inspections that several UAF artillery weapons (4 Grad launchers from one storage facility, 8 Msta-S self-propelled howitzers from another) were no longer at their ceasefire locations away from the frontlines. UAF claims they were sent for maintenance, though it is at least plausible that they were used in the recent exchanges of fire on the Donbass.

Zeman certain there are no Russian army troops on the Donbass

Zeman rather aptly compared the war on the Donbass to the Spanish Civil War, where the USSR on one hand and Nazi Germany plus Fascist Italy  on the other supported the two warring sides. However, just as the Spanish Civil War was a conflict among the people of Spain, so the current war in Ukraine is a conflict over the future of that country. Kudos to Zeman for implicitly equating Ukraine’s supporters with Fascist Italy and Nazi Germany…

“It was Buk-M1”–Classified Russian report on MH17 published

May 9th: All Those for Whom it is a Victory Day have gathered in Moscow. The Aggrieved Parties Stayed Home.