This is the  37th edition of the Daily Brief, which provides a sampling of news stories most shared on Russia’s social media, as reported by mediametrics.ru. To view other editions, click on the Daily Brief tab above the title.


A new political reality was ushered in on the Red Square on May 9:  Russia 2.0

The author, Oleg Shchukin, marvels just how much has changed since last May. A year ago people were still talking in terms of Western sanctions crushing Russia. Now people are wondering for how much longer can the US keep the EU under its control. And the burgeoning alliance between Russia and China represents a major change in geopolitical realities.

US Air Force Chief of Staff: Russia and China will surpass us in airpower in 5 years 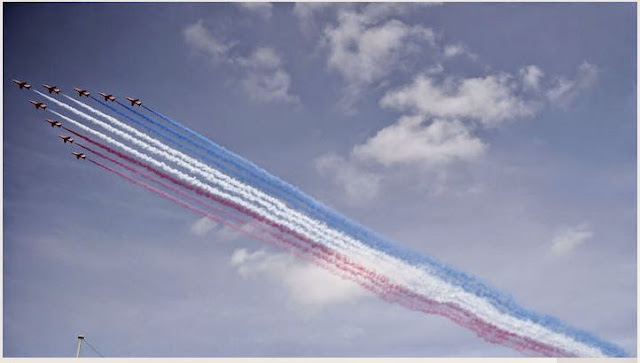 USAF General Chuck Walsh made this claim while participating in a discussion on Fox News. It’s hard to tell whether this statement reflects genuine concern (quite possibly the ongoing problems with the F-35 are starting to become a cause for concern), or whether this is simply part of the usual inter-service budget battle.

Right now about 52% of Russians have a positive opinion of Stalin, while only 30% a negative one. The article points out that USSR’s population actually grew considerably during the Stalin era (no mean feat, considering the damage wrought by WW2), as compared to the decrease during the “liberal” rule of the 1990s. Moreover, even at the height of the Purges, a smaller proportion of USSR’s population were repressed than are imprisoned in the United States today. That Stalin presided over a tremendous developmental leap forward goes without saying.

Ah, so there is more to the “Putin’s taking a day off” story after all…Kerry will meet with Putin and Lavrov on May 12 and discuss Iran, Syria, and Ukraine, among other issues. If I were part of the Kiev government, I’d be concerned. To be sure, another trending story cites Peskov as saying no decision to have such a meeting has been taken yet. Putin playing hardball with Kerry?

Rogozin said earlier that France can’t sell the ships to a third party without Russia’s approval, though it’s not clear what the legal basis for that claim is. Because once the contract is nullified and Russia gets its money back, the ships become French property once again. France continues to insist the fate of the ships depends on the resolution of the Ukraine crisis.

A
source close to Greek government told RIA Novosti that PM Tsipras
accepted Putin’s invitation to attend the annual St. Petersburg economic
forum which will be held between 18 and 20 June.

The offer was made by RF Deputy Minister of Finance Storchak in a telephone conversation with PM Tsipras.

This story, published in a local newspaper but going viral Russia-wide, deals with declassified US nuclear warplans which indicate the intended targets for US nuclear strikes.

Boris Nemtsov found out about 70 Russian soldiers killed at Debaltsevo

This story has been bouncing up and down ever since Nemtsov’s death, and it claims that Nemtsov conducted an investigation, through his contacts in the Airborne Forces but also using “open sources”, and found out the number of Russian troops allegedly killed in the two Donbass campaigns (70 at Debaltsevo, 150 during the summer 2014 fighting at Ilovaysk). The 64-page report claims families were paid off or threatened to keep quiet about their relatives’ combat deaths.  This story is running at rbc.ru, which is a stronghold of Russia’s Nemtsov-friendly economic liberals which does a decent job of running down economy stories, but otherwise lapses into conspiracy theory territory, as it does in this instance. Nemtsov’s reputation was such that nobody in the Airborne Forces would ever consider talking to him. He represented everything they hate.

Zakharchenko promised to punch Poroshenko in the nose, should he come to the Donbass

Zakharchenko was specifically referring to Mussolini’s
Poroshenko’s claim that the war will continue until Crimea and Donbass
return to Ukraine. Zakharchenko’s “money quote” ran as follows: “Petr
Alekseyevich, come here and try it, but if you can’t, don’t talk. If he
wants to–let him try, but then he’ll just get a bloody nose and leave.”

DPR representative plenipotentiary Denis Pushilin said that DPR was open to the idea of autonomy within Ukraine, provided such autonomy did not harm the interests of DPR. However, Pushilin added that if Kiev does not abide by Minsk-2, including its political provisions, DPR will opt for full independence.

How the Donbass is coming back to life

It’s a simple recipe: new documents to replace Ukraine-issued ones, supplies of natural gas directly from Russia, and the streamlining of local legislation to make it compatible not only with that of Russia but also of (drumroll, please) the Eurasian Economic Union (which is interesting in and of itself, because it suggests that should Russia recognize, or annex, LPR and DPR, it will not be the only country to issue an official recognition–there are reasons to believe Russia’s diplomacy is laying the groundwork for something like that). All told, these measures have had the effect of stimulating bilateral trade with Russia, which has led to a drop in prices for consumer products.

Remarkably, the UAF commander on the scene acknowledged the incident happened, but said it was “an accident.” The OSCE representatives were observing an exchange of artillery fire when they came under machine-gun fire from UAF positions located only 200m away.  One has to consider the possibility many of these ceasefire violations are the product of poorly trained and scared UAF mobilizees simply not knowing how to react or even understanding the situation.

Strelkov: Poroshenko is a puppet, just like Zakharchenko, Pushilin, and Purgin

Strelkov wrote those words on his vkontakte social media account, which suggests the old enmities and rivalries are continuing. Moreover, Strelkov’s depiction of the three leaders (why did he leave out LPR’s Plotnitskiy, though?) is not even fair–their freedom of action may be constrained by other actors, but they still have a great deal of freedom to make their own choices.

Poroshenko: We have used the quiet time in order to strengthen our military

Benito Petro Poroshenko visited the Desna training center where he assured the gathered troops that Ukraine has been using the ceasefire to strengthen its armed forces. Poroshenko specifically said that the UAF are now being equipped with laser-guided Stugna anti-tank guided missiles and other recent Ukrainian designs. Of course, not a single picture of these weapons has been spotted on social media yet… The same story also cites Zakharchenko as saying that Ukraine is building border control posts behind the front line, as if to indicate a de-facto ceding of sovereignty over that region.

Ukraine is airing a documentary titled Airport purporting to depict the battle for the Donetsk Airport, which gave Poroshenko an opportunity to say something stupid a few words about how, once the DA is back in Ukraine’s hands, its wreckage will be put under glass so that future generations of Ukrainian soldiers can be raised in the “cyborg” spirit.  He also thanked generals, officers, and soldiers of the UAF for rebuilding Ukraine’s military, without which “the enemy” (whom Poroshenko for some reason forgot to identify by name) would have overrun all of Ukraine.  I have a sneaking suspicion Poroshenko doesn’t believe half the stuff he’s saying these days.

EU will cancel sanctions, and Ukraine won’t even be noticed

This
opinion was expressed by a Ukrainian economist Aleksandr Okhrimenko on
the 112 TV channel. Nothing new as such here, except for the “defeatist
attitudes” creeping into the mainstream.

The story sounds preposterous on its face except that, well, one starts hearing the Happy Birthday tune at 0:35 on the video above. I dare say Ukraine’s Westernization experiment is progressing from its “tragic” phase straight into the “ludicrous” one.

Forbes columnist: Ukraine is not worth a war with Russia

The fact that Forbes would run such a column in the first place indicates that the US business circles are getting tired of the sanctions as well, and moreover it’s now clear that whatever business bonanza they were promised in Ukraine is not going to materialize. Gaining Ukraine but losing Russia is still a major net loss for them.

He was dragged to death behind a horse. The incident took place in the Lvov region. Two suspects have been arrested. This is but the latest in a long string of similar incidents.

The “fifth point” is, of course, his ever-so-sensitive brain posterior, which is probably correctly interpreting Merkel’s trip to Moscow and Kerry’s upcoming trip to Sochi (as well as the barrage of other signals from the EU itself)  as indicators that the West is prepared to secure peace in Eastern Europe at Ukraine’s expense.

Mayor Nil Ushakov gave a May 9 speech in Russian, which may violate Latvia’s stringent law establishing Latvian as the only official language in the country. Given that Latvia’s economy is also tanking, I can see the attractiveness of this approach–we engage in a little “witch hunt”, Russia protests, US throws a lot of money at Latvia! Because what other options does Latvia have at this point, except to try to replicate Ukraine’s example? On the other hand, Latvia did abandon a plan to criminalize the wearing of St. George Ribbons.

The rest of the world


We have already lost

The article deals with the elections in Poland, where the pro-Russian candidates were eliminated in the first round, but the story fails to note that they (representatives of minor parties, one and all) have done much better than ever before, while the sitting president Komorowski, who expected to win outright in the first round, actually came second and now has to face a runoff election. So there is an observable shift in Poland’s politics.

Aside from the fact no Russian submarine was ever detected in Swedish waters, one wonders whether the campaign of placing large pro-gay posters on Sweden’s coastline is intended to deter Russian subs or to ridicule Sweden’s government.

At the time of the report Duda had 36% of votes to Komorowski’s 31%. Since neither candidate is likely to get more than half the votes cast, the two will face each other in a runoff. Komorowski’s poor performance is blamed (not by Komorowski, of course) on his belligerence toward Russia and his desire to involve Poland in the Ukraine crisis. Duda comes from a staunchly anti-Russian Law and Justice party which also happens to be a Euroskeptic one.

That is an entirely correct assessment, and I have to say I am surprised by the magnitude of the effect. A few months ago Komorowski was seen as a first-round victor. These days, though, when one looks at comments accompanying pro-Ukraine or even anti-Russian articles which are the staple of Poland’s establishment media, one is struck by how many skeptical comments these articles elicit. That’s a big change since last year, when the public opinion was still pro-Ukraine.