Russian Blogosphere Survey for May 7, 2015

Russian Blogosphere Survey for May 7, 2015

This is the 32nd edition of the Fort Russ (almost) daily feature. To view other editions, click on the Daily Brief above the title.

China’s President Xi Jinping, who is planning to attend the May 9 Victory Parade in Moscow, said that “the Russian and the Chinese people are ready to act decisively and forcefully, and in collaboration with all peace-loving countries and peoples of the world, against any attempts or efforts to distort and rewrite the history of the Second World War.” In the meantime, two Chinese frigates have entered the Black Sea.

Which Russian naval base will they visit? Novorossiysk or Sevastopol?

In addition to honoring the millions of Soviet POWs who perished in German captivity, Gauck also thanked USSR for liberating Germany from its Nazi government, an act without which today’s free Germany would not have been conceivable.

France intends to sink the Mistrals

Actually, the Le Figaro article which Korotchenko cites mentions several variants under consideration, including conversion to Obama’s private yacht sinking at high seas, scrapping, or sale to a third party. However, the contract between Russian and France is still in effect, so this amounts to little more than speculation. A lot will depend on what happens on the Donbass in the next few months, and at the July EU summit. It seems that France simply does not want to be the first, and certainly not the only, EU country to make a move toward better relations with Russia. 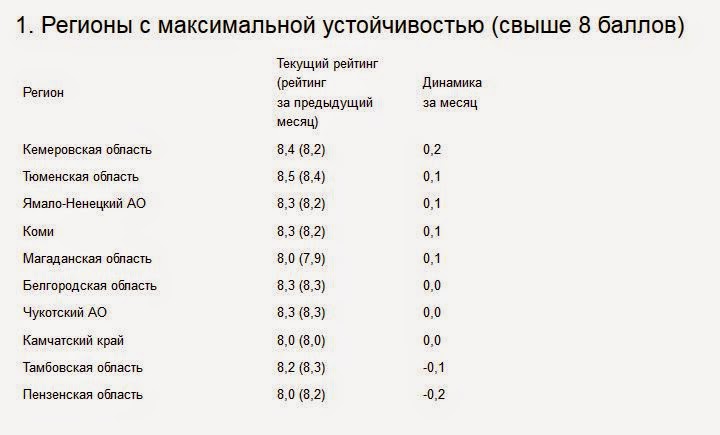 Coming on the heels of the governor ratings discussed in yesterday’s survey, now it’s time for the ratings of the regions themselves. This, too, is a significant difference between USSR and contemporary Russian Federation, in that the national leadership is able to make decisions on the basis of far more extensive and accurate data on what is happening in the country. This rating (and many others) is prepared on a quarterly basis by a non-governmental organization, part of Russia’s civil society whose task it is to assist the government in governing the country and provide it with a hopefully impartial assessment on how things are going. That was something that was, alas, missing in USSR, which meant that the political crisis of the late 1980s came as a surprise to most of the country’s leaders.

The situation in Great Britain is continuing to attract the attention of Russian political bloggers. Leshy draws attention not just to the upcoming election, but also to the referendum on whether UK ought to continue as part of the EU, the upcoming QE (quantitative easing–euphemism for trickle-down economics by the ECB) which threatens to make non-Eurozone economies less competitive relative to Eurozone economies, and of course the Russian capital flight which proved to be considerable. All told, UK’s capital flight was actually more sizable than Russia’s over a comparable period of time. Overall, it would appear that what the UK is experiencing is its inability (and/or unwillingness) to adapt to the already visible end of US-centered globalization (which turned out to be simply a thinly veiled attempt to establish US global dominance) and the shift to economic sovereignty not just by Russia and China, but even by EU member states. While the UK will not become a developing country overnight, one cannot even rule out the possibility of another referendum on Scotland, or even in Wales, not to mention the nationalist English backlash… To quote Dean Acheson, Britain lost an empire and still has not found a role.

Latvia’s ambassador to NATO: NATO not obligated to save Ukraine

That’s the view expressed by Maris Riekstinsh in a press interview. In his opinion, NATO is not the First Galactic Empire a global cop, and should mainly be concerned about the well-being of its member states.

Skirmishes were continuing around Shirokino and Peski. However, the big concentrations of UAF forces appear to be around Avdeyevka (the city at the “mouth” of the former Debaltsevo salient, where many of the survivors fled) and three LPR front sectors, including Bakhmutka and Stanitsa Luganskaya.

Aid to Novorossia is coming from everywhere

Humanitarian aid for the Donbass is now also being organized by a group of German activists.

Vita Zaverukha (a pseudonym which roughly means “Storm is Coming”) has popped up in media reports on and off over the course of last year, usually in connection with some display of Nazi ideology or an atrocity committed on the Donbass. Her VKontakte page openly declared her admiration of Nazi ideology and the desire to commit genocide (the RPG she carries in the photo above has the words “Death to the Orthodox” written on the warhead) .Initially with the Aidar battalion, she then drifted toward Azov, and ultimately became member of another neo-Nazi group of unknown name but consisting of Aidar and Azov veterans. It is that group that apparently killed the two police officers in Kiev after a gas station robbery. Her arrest provoked an outburst of rage against Avakov and the Ukrainian MVD, including people posting personal information about Avakov’s son, and asking the not unreasonable question why are the perpetrators heroes for killing “enemies of Ukraine” on the Donbass, but criminals when they attempt to do the same in Kiev (as the two killed police officers were former Berkut members)?

This is not the first time a forest fire in that area had caused a dispersal of radiological fallout. Earlier fires scattered radioactive ash as far away as Scandinavia and Turkey.

Khimgrad, or Chemistry City, is an industrial part established in Kazan in 2006, a public-private partnership with the participation of 250 private firms.

Ukraine’s steel industry in a tailspin

Latvia’s industry in “rotten USSR” and the developed EU

“Obves” (a slang term that refers to car customization kits) is a Kalashnikov Concern project, undertaken under a MOD contract, to modernize AK-74M rifles already in service and to increase their lethality by a factor of 1.5. The modernized weapons have already undergone testing, and Kalashnikov is in the last phases of preparing a facility that will carry out the modernization on a mass scale.

It’s easy to forget the T-14 is not the only innovative weapon system that has been revealed in recent weeks. The Koalitsiya-SV may well be the longest-ranged artillery weapon of this caliber anywhere in the world, as it can fire a photon torpedo an ordinary shell out to 40km, range that can be considerably extended with rocket-assisted or “base-bleed” projectiles.

According to Federal Migration Service data, there are 2.5 million Ukrainians in Russia right now. Nearly a million of them are refugees, while 550 thousand have left for Russia in order to escape the blessings of European integration being mobilized.

A pig in uniform is still a pig

Behold, an official photo of the new UAF summer uniform. Don’t these people have any brains?

Speaking of brains….In general, it might be a good idea to give your 4th? 5th? 6th wave of mobilization? (I’ve lost count) a little training before putting them in charge of a Death Star self-propelled howitzer.

In many ways, today’s Ukrainian propaganda is a faithful echo of this earlier attempt at Eurointegration (and in fact the Nazi brochure does mention “European unity”…), down to extolling the virtues of Ukraine becoming part of the Lebensraum, and blaming Putin the Bolsheviks for everything that ailed Ukraine, including the consequences of Germany’s occupation.

So that they may remember. A trip around the Reichstag

The graffiti left behind by Red Army soldiers (most of it–obscene comments were removed) can still be seen in today’s Reichstag, preserved  as a warning to future generations. The post contains photos of the preserved panels of graffiti still on display today. Because credit must be given where it is due–no country has ever come to terms with the crimes it has committed on others to the same extent as Germany.

One of the ironies of history is that the Nazis in whom Bandera and other Ukrainian nationalists placed their hopes did not think much of the idea of Crimea being part of anything resembling Ukraine , not even the Reichskomissariat Ukraina (and neither did the German/Austrian creators of the first Ukrainian state back in 1918 for that matter). Instead, Crimea was supposed to become an exclusively German colony (though with a suitable population of slave laborers), and part of the III Reich proper under the name Gotengau.

“All new Russian Armata tanks will be identified by their IP addresses and destroyed”, Anton Gerashchenko said.

“Somewhere between Delhi and Kathmandu”

“I’d like to have neighbors from OSCE. You can drill, scream, play music all night long, crap in front of their door. They won’t hear or see a damn thing.”

Hollande: “Looks like Ukraine will get the Mistrals after all!”

Hollande: “We are going to send them to the bottom.”

AnalysisBest of Fort RussBloggersDaily Brief
0 197
Share
Subscribe to our newsletter
Sign up here to get the latest news, updates and special offers delivered directly to your inbox.

Statistics: the number of homicides in Kiev region up 8 times in March 2015

US rep to NATO gathers most intel from social networks