The Right Sector will follow Ukrainian command, sort of … 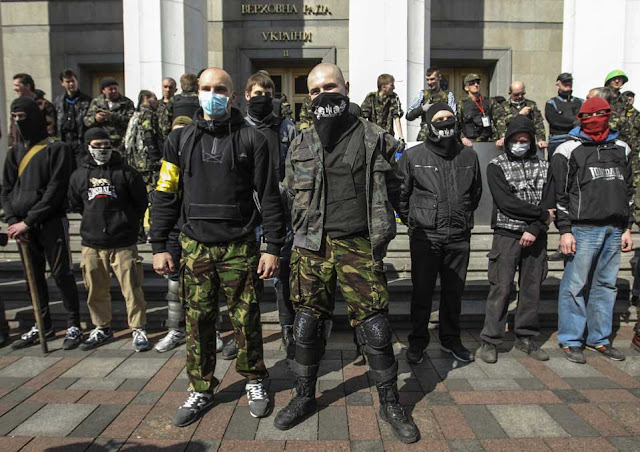 
Minsk agreement demanded to tame illegal armed groups, like the Right Sector. Therefore the goal in Kiev was to appease the various Ukrainian ultra-right radicals assembled under the umbrella of the Right Sector, headed by Dmitry Yarosh, by making them appear legal on the outside, without changing anything on the inside.

The Right Sector will remain an illegal armed formation

The head of “Right sector”, MP Dmitry Yarosh on his Facebook confirmed the statement of the press service of the General staff of the Armed forces of Ukraine about the fact that illegal armed groups of volunteer corps of the “Right Sector” had complied and will comply with all the orders of the army command. In fact, this statement confirms the refusal of the armed Nazis to become a part of the Ukrainian Armed Forces and/or the Ministry of Internal Affairs/National guard.

“I know that I will come under a barrage of criticism, but I want the Ukrainians to win the war against the Satan’s Empire this time,” wrote Yarosh.  However, he added that the Ukrainian volunteer corps “Right sector” (DUK PS) will never follow orders which will betray the interests of the Ukrainian nation.  Yarosh and his subordinates will determine which orders to follow, and which to regard as “treacherous”.

Earlier, the press service of the General staff of the Armed forces of Ukraine quoted the statement of Yarosh that PS had complied and will comply with all the orders of the army: “The “Right sector” now executes all orders of the General staff and will continue to comply with all orders of the leadership of the Armed forces. Throughout the war we had no problems with the army. Our people – in fact, citizens who volunteered to fight the enemy, had always considered themselves a part of the Ukrainian army and fulfilled their constitutional duty to protect the sovereignty and territorial integrity of the state”.

He added that currently “there is a kind of formal legalization of this activity.” On May 14, Yarosh has submitted to the Verkhovna Rada of Ukraine the draft law “On the Ukrainian Volunteer corps”, whose task is to prepare volunteers for the defense of Ukraine.

All this is talk about nothing. The fact remains that on the territories under the Junta control roam thousands of people with guns and no police-army-authority can do anything about them. There is no law and the Right Sector will not obey it.

FIFA scandal as a microcosm of a collapse of international law

ISHCHENKO: Jews and the Holocaust as Ukraine’s Way of Life

What if Russia assassinated Ukrainian Nazi Yarosh like the U.S did to Soleimani?