[To view Yevdokia Sheremetyeva’s earlier dispatches from her humanitarian work on the Donbass, click on the littlehiroshima tab above the title.]

–Dunya, don’t look at me like that. I won’t take you there. Forget it.
We’ve been contacted by a Gorlovka hospice. They asked for help. The hospice is tiny, they have the lowest priority for supplies. Not enough soap, diapers, solutions, everything. Workers aren’t getting paid.
By all accounts, Gorlovka is on the front lines. The center’s getting hit pretty hard.
I’m biting my lips.
Both Zhenyas, the Lugansk one and the Moscow one, don’t even wanna talk about it–NO WAY.
–How about Chernukhino or Debaltsevo? They definitely need aid.
–Let’s go, then. 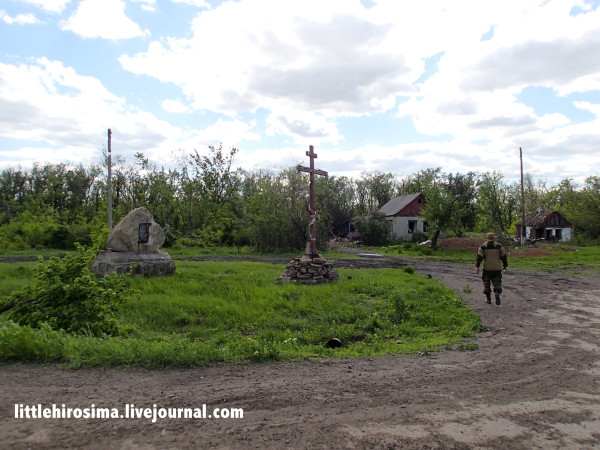 “Let’s go” is easier said than done. You can’t simply go house to house with packages. Some people have relatives who help. Moreover, both Debaltsevo and Chernukhino received considerable assistance due to their media exposure. But we have financial and time limits and we can’t provide aid for the entire Donbass. Therefore we try to help the most needy–the homeles, the wounded, those who don’t get assistance from their children or who have bedridden sick, etc. We act in accordance with an old, proven system: We find the head of the village and get the list of the needy individuals from him or her. That’s how we rendered assistance in Khryashchevatoye, Georgiyevka. Then we go house-to-house, and deliver in person. That’s the hardest part–by the end of the day you feel as if you were wrung dry.
–It’s Sunday, a day off at the village office.
–No problem, we’ll find someone. We get to the town, and it’s sooo green. There is no oppressive feeling. It’s some phantasmagoric illusion that makes you feel as if nothing’s wrong here. But there are houses behind the trees. Shattered houses…Ruins…
I tried to film, but it didn’t turn out…Everything’s covered by the greenery.

We quickly found the village head Irina Nikolayevna Arkhipova–all the phone numbers are posted on the door of the door council. While we waited, the locals came up, started to talk.
–Were you here during the winter?
–Yes. It’s a horrible memory. The National Guard was here. They stole, marauded. Poured diesel into wells.
–But why?
–Who knows? Ask anyone, they’ll confirm. The people were being chased out in the streets, then were used as a human shield. And they drove behind on their BMP. They forced the women and the elderly to walk ahead, the monsters…
–Are they all like that?
–No, the draftees are fine, as a rule. But the volunteer battalions…No words. Some UAF troops were captured here, said that they can’t shoot, there are barrier detachments behind them.

I heard about the human shield and the poisoned water from many. I didn’t have it in me to ask why, as couch analysts demand in their comments, they didn’t film these events. But anyone who’s asking me about that is free to come with me to Chernukhino next time and ask the grandmas in person, why they didn’t document it all. While looking them in the eyes, not aside. Irina Nikolayevna came quickly, she was also quick to open up the database and select the people who need help. She accompanied us to all of them, even though it was a day off.
–Now many are coming back. During the winter there were only 1300 left out of 6000.
–And now?
–About 2500.
–You were here during winter?
–I was. I’d rather not talk about it, please excuse me.

First we went to two grandmas living alone. I wrote about them here. We mostly helped the homeless.
Galina Vasilyevna Molochek in front of her home. Former home…
You know, it’s a strange feeling to see a person next to or inside their own shattered home. He or she is always lost, and I can’t quite find the word to describe it–not sadness, not anger. It’s difficult to experience. You once had everything here, and now, in one moment, you’ve lost it all.
The photographs, the presents, grandma’s jewelry, childhood artwork.
In a fraction of a second. And you are one on one with that reality. Having lost everything. 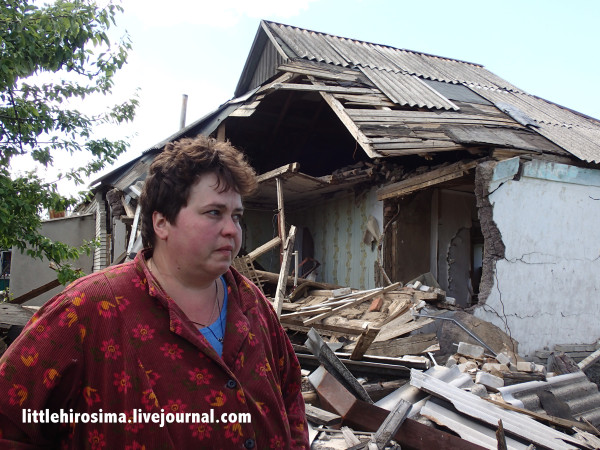 She lives with friends a few houses down the street.
–I had everything. Now there’s nothing left, not the home, not the husband. We drive through Chernukhino, and suddenly cobblestones? How’s that possible?
–Like on Red Square. Chernukhino was founded in 1600.
Naturally, no buildings from that time survive. But it’s not a tiny town.
–A mine was operating here before the war, a poultry farm Also a prison, even during the winter there were still prisoners there, but fewer.
–And where are they now?
–God knows. Valentina Aleksandrovna Bodnar in her home. She lives at her son’s across the street. He’s disabled, he can’t survive without aid.
Valentina Ivanovna was constantly smiling. Constantly. She didn’t complain once.
But her eyes, her eyes. They don’t lie. 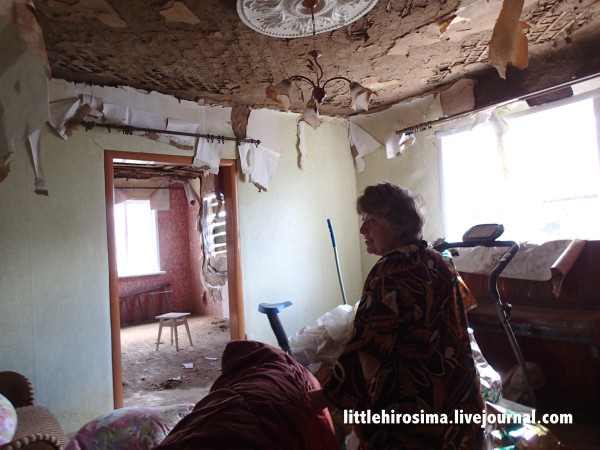 Everyone whom we visited asked about construction materials.
–It would be nice to fix it up…Mainly the roof, then the rest. But the roof is most important. Nelya Leonidovna. Takes care of two disabled, works in Debaltsevo, but doesn’t get paid.
Her mother was wounded by shrapnel, is still in critical condition. She mostly unconscious.
–Two nazis lived in our house. Left boobytraps when they left. See the basement? Our guys disarmed them there…It’s awful just to think about it, excuse me. 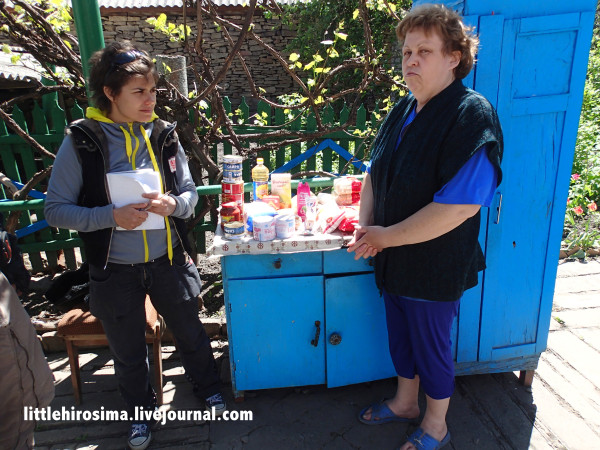 No matter how many homes we visit, the same unwillingness to reminisce. But that’s just in the beginning. And later…we ourselves regret we even asked…

But I can’t get that basement out of my head. Why? For what? Best of Fort RussBloggersChernukinoHumanitarian CrisisJ.HawklittlehiroshimaNovorossiaTerror
0
Share
Subscribe to our newsletter
Sign up here to get the latest news, updates and special offers delivered directly to your inbox.