[To view Yevdokia Sheremetyeva’s other dispatches from the Donbass, please click on the littlehiroshima tab above the title.]

I spent yesterday running with Zhenya (the Moscow one) in panic all over Moscow looking for eye drops and tablets for Vika.
We found almost everything we needed. We try to find “Lutsentis” in the Internet–43 thousand rubles or more. Not enough. Damn it.
–Call Vitaliy, remember? He wanted to buy diapers for the next trip?
–You are right, hurry!
Vitaliy, yes! Thank you!!!
I look at the list, and again I’m cursing. We need some “klapan akhmed.” The search engine can’t even tell us how much it costs. It’s available only for hospitals and clinics. It’s used in surgeries. How are we going to find it?
OK, we’ll figure it out.
What’s all that about, you’re asking? 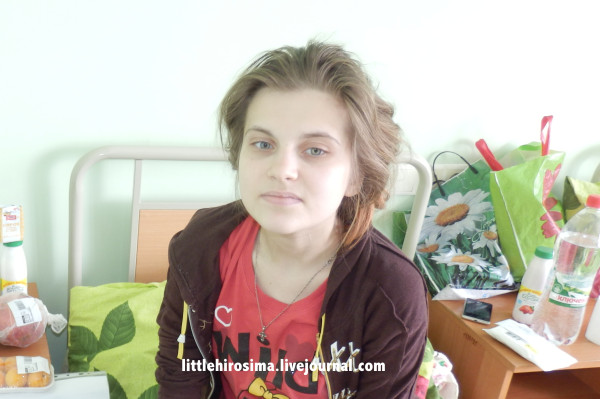 It’s about Vika’s eyes which are not well at all.
Vika is a girl from Lugansk, a diabetic whom we took under our care after our May trip to the Donbass. Her brother recently died of diabetes. After that she stopped eating and lost her will to live. The girl was slowly being extinguished–she lost 13kg, almost went blind, lost her front teeth. With great difficulty we placed her in a hospital in a critical condition. Very critical. One might say, on the brink.
Then Vika began to eat and slowly recover. Things are moving in the right direction.
But it turned out she has major problems with her vision. Moreover, it all happened very quickly. Literally over a few months. Right now she sees everything in spots. We found a very good ophthalmologist-surgeon (he’s well known in Moscow and St. Petersburg) who has modern equipment. He hid his equipment during the summer bombardment in a bomb shelter. But now he is continuing his practice, he has not left. In general, the Donbass physicians are heroes who deserve a separate discussion.
We took Vika to see him.
–I could operate even tomorrow, but first I need a permission from an endocrinologist. And the preparations and medicines needed for the operation which we don’t have here. I’ll take care of everything else.
So here our real problems began.
Vika’s sugar is out of control and, as we were told by the endocrinologist, he won’t give us permission to operate until it returns to the norm.
Our main task right now is to get her back to normal. We have everything we need for that–good insulin, medicines, and proper nutrition. The main thing is for Vika not to get unnerved, eat, and abide by the doctor’s instructions.
Everybody is working toward this task–we, who are visiting Moscow bus stations and begging the drivers to take the medicines and money, and Lena and Zhenya (the Lugansk one), and you, who are transferring funds.
We are now waiting.

Vika was discharged into a domestic doctor observation regime.
Lena visits her every other day, and sometimes even more often, bringing food packets. She spends 1000-2000 rubles before every visit. Vegetables, meat, milk, etc. Few people can afford these things on the Donbass these days.

She maintains scrupulous records, like these ones (some prices are in hryvnia, which means we multiply by 2): 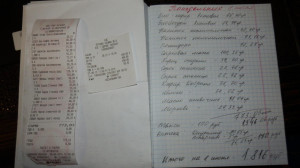 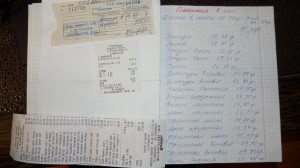 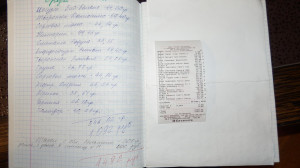 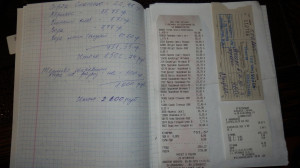 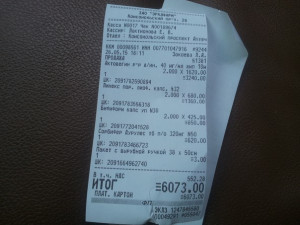 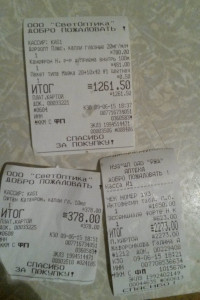 I talked with Vika on the phone yesterday:
–Vika, lots of people are pulling for you, you simply must eat and not get upset!
–I will, I am trying! I want to be able to see again!
–And don’t get upset about your teeth, we wrote to the Donetsk dental clinic–they promised to help!
–Really?!
In general, we are doing what we can. But eyesight is most important right now.
It will be a complex operation without a guaranteed outcome. But the situation is such that she needs it as soon as possible–she is in the second phase. “She will not get a second chance”, the ophthalmologist told me.
Vika’s medical history between May 21 and June . 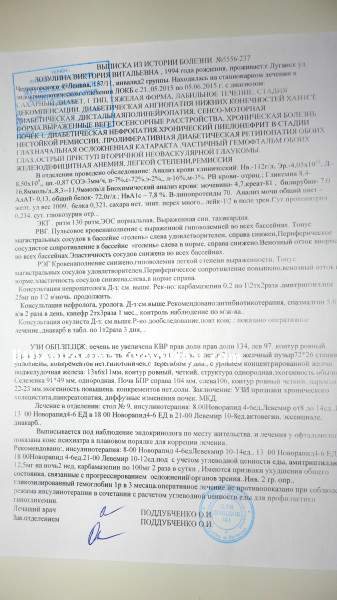 I am asking any medical specialists and anyone who understands what is happening and who reads this blog–don’t curse. If I wrote something wrong, please keep in mind I am neither a doctor nor a biologist. Vika is being observed by an entire brigade of qualified specialists in Lugansk, and we are listening only to them, not anyone else.
Also a request to everyone–the situation is difficult, time is extremely short, therefore please keep your clever comments, assessments, and recommendations for another occasion.
If anyone has any concrete proposals, desire, and ability to help, we’re open to them, please write us.
Believe me, we are doing everything we can to save Vika.
If you have an ability to help us in the search for that klapan, that would be of great help. 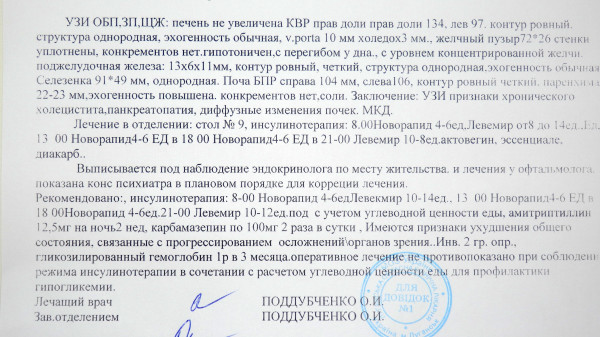 PS. We have discovered fraudsters, some “Whole World” orthodox fund which has posted my material in the internet together with their account information. They are fraudsters. Here’s a link.

I suspect they are not the only ones to have done something like that.

Best of Fort RussHumanitarian CrisisJ.HawklittlehiroshimaTerror
0
Share
Subscribe to our newsletter
Sign up here to get the latest news, updates and special offers delivered directly to your inbox.