Translated from Russian by J.Hawk
[To read Yevdokia Sheremetyeva’s other dispatches from the Donbass, click on the “littlehiroshima” tab above the title.]

We’ve gotten a second van of aid to Pervomaysk.
As the previous post made clear, this time I made it all the way to the city.
Let this post be one of happiness and victory over human villainy which surrounds us from all sides.
People are continuing to write. They offer aid, write from various cities, including from Kiev. Lots of places.
People, friends–no, people! What can I say!
I’m glad you exist.
It’s thanks to you that we’ll be able to take a third van.
Our motorcade: 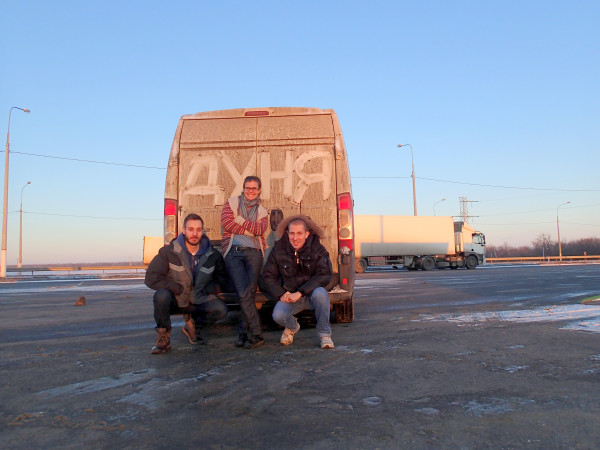 No, the “Dunya” idea wasn’t mine. Don’t hit me. The guys wrote it for recognition purposes after the second van got lost. So we ended up with a motorcade with call-signs Dunya1 and Dunya2. If anyone wants to help or even participate,
contact me through my livejournal account, through Facebook, or via email: [email protected] Only write from real accounts–I’ve gotten suspicious after getting threats.
Here’s what’s needed.
There’s big need for children’s clothing, especially warm.
Overall, we’re focusing on collecting money which we use to buy the necessary foodstuffs and all that kids need–disposable and non-disposable diapers, porridges, baby food, but also adult diapers. There are many bedridden and elderly, and they also badly need the help.
If you don’t feel comfortable transferring money, you can buy them yourself and bring them to us.
If anyone wants to help drive to Pervomaysk and make the deliver that would also be fabulous. Because we, the aid workers, are all working people with children, ill or elderly parents, and there aren’t many of us ((((
Lesha coordinates the collection of money and goods on the second front.
Lesha, I thought it quite joyful when were unloading the boxes of baby food and diapers in a snowstorm.))))
And in general, so many people have answered the call that I smile while writing this. 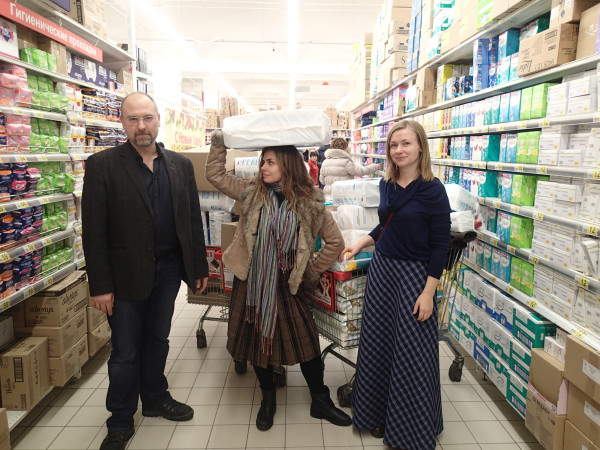 One could write a long story about our trip, but I won’t. Or, I will, but for now let it remain offstage, or it will become a separate collection of stories later. I think you know what I’m getting at 😉
When we arrived in Lugansk it began to snow like crazy. We were worried about making deliveries due to the state of the roads. The snow covered up many shell craters. And there are many unexploded shells on roads. 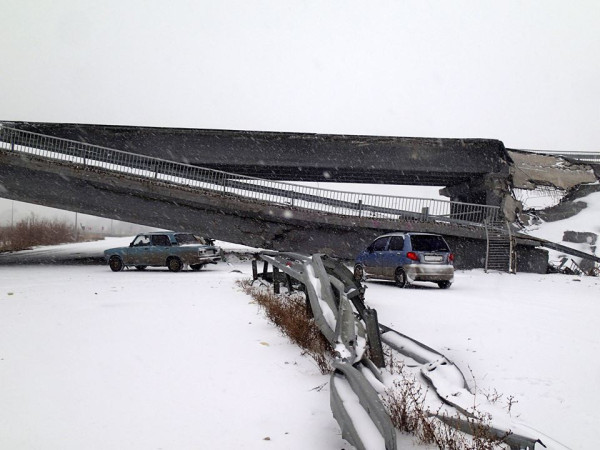 But everything suddenly melted the next day, even though it was still terribly cold. We were shivering the whole time. 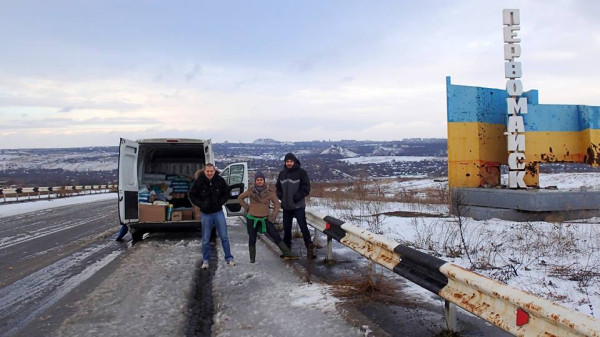 I wrote my Pervomaysk impressions in the previous post. I won’t repeat that we were all in shock.
Many friends remarked: “What did you expect? It’s war.”
We knew there was a war. Not all of us were as influenced by it as I was. Moreover, we had very different views on what was happening. In come cases exactly opposite.
But after the trip we had nothing to argue about.
Because when  you see a bombed-out city, hear the tens of stories told by the grandmas, women, it leaves a boulder crushing your soul. The one that Sisyphus is probably still pushing. 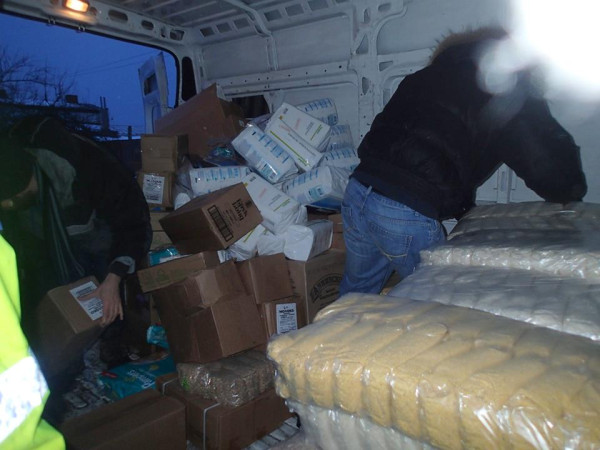 When we arrived at city center I saw the vehicle out of which bread was distributed on the basis of passports. Half a loaf each. The guy distributing bread asked not to photograph him. In general, the humanitarian situation in the city has improved since our first van. Media coverage attracted attention to the city and now the situation is better. Red Cross rations were being distributed when we arrived. 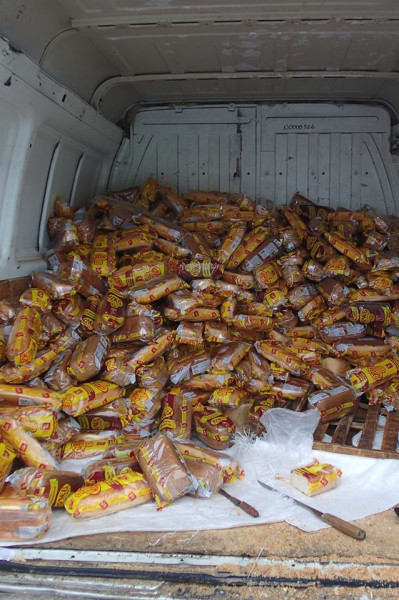 But it doesn’t mean that aid is not needed, it’s more than needed. Believe me, I’ll never forget how the women cried at all the communal kitchens, churches, wherever we went. And how they thanked us.
After something like that one can calmly not fear death any more. 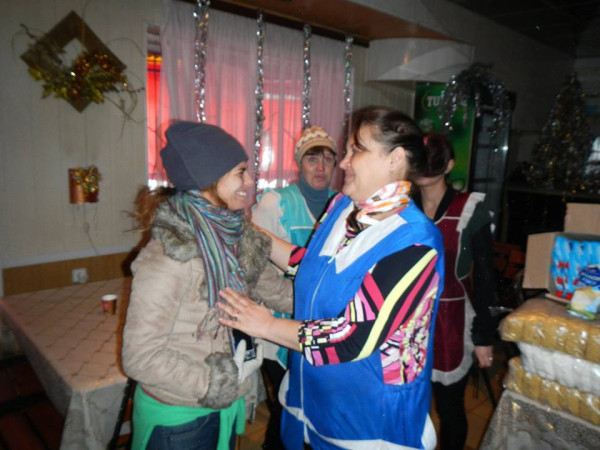 And we know a little secret. One must carry a lot of candy. Because there are kids everywhere. And you can’t simply not give them something ) 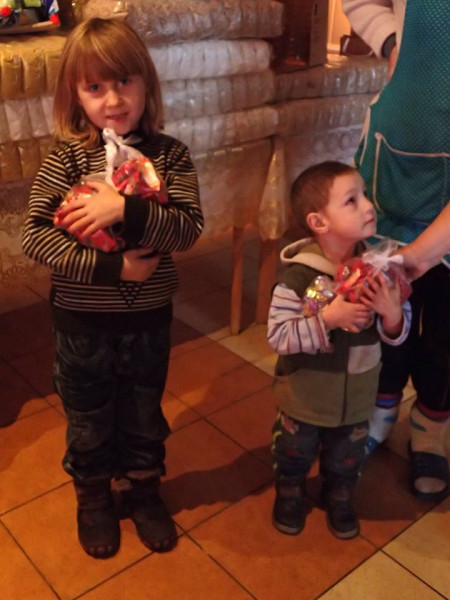 And when we came to the church a children’s choir was singing. They sang something very beautiful in Ukrainian. We did not have much candy, but everyone got a handful.
Everyone was so happy! 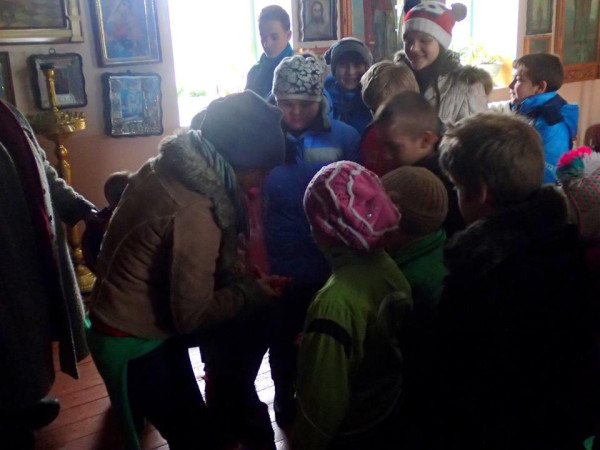 They framed me in all the photos as a marker “here’s the food, we delivered it and did not eat it ourselves.” But I was totally exhausted by the end. You wipe the tears and you pose.
I was given an icon in this church. Thank you. 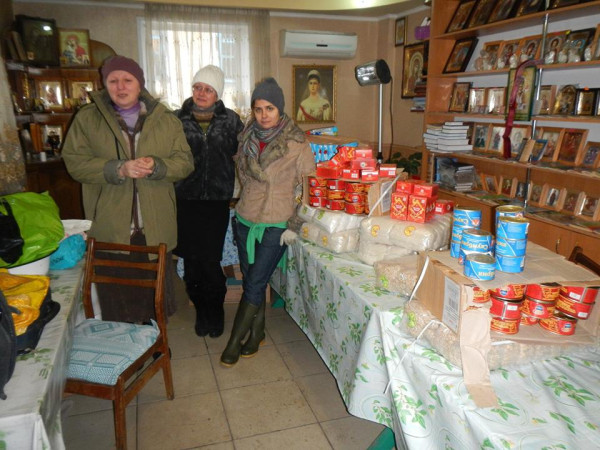 I also received two certificates with the mayor’s signature expressing the inhabitants’ signature. It’s too bad I was the only one to get one, because it was a joint effort. By everyone. Lena, Zhenya–particular thanks to you! You are my kin now. They did not let me leave for home without a huge bag of preserved vegetables they made themselves. And six liters of peach compote! My daughter and I drank everything by now ))
Ruben, Sasha, Oksana–you are terrific for going. You delivered, did not get frightened.
Lena, Sveta–thank you for helping carry, pack, load, collect everything.
My family who categorically refused to let me go. I know that you worry to the point of not sleeping every time. Thank you for letting me go…
Thank you everyone, folks, friends, the strangers who were not indifferent to the suffering of others. Thanks to the unknown sponsor who gave us a considerable sum of money which enabled the second van to go so soon.
We’ll go again, and I’m happy beyond measure because of your response.
Dammit, I’m crying again. But those are tears of joy.

Germany’s Platzeck: EU Sanctions have the Opposite Effect