[To read Yevdokia Sheremetyeva’s other dispatches from the Donbass, click on the “littlehirosima” tab above the title.]

Zhenya wrote me a few days ago: “If everything comes together (and it seems that way), you’ll be in for a surprise on Thursday 🙂 And now let suspense torture you, because I won’t say another word. :)”
Oh, did it torture me.
And then suddenly yesterday I saw on facebook happy photographs of our very own Sergey Vladimirovich Kutsenko.
My Sergey Vladimirovich. 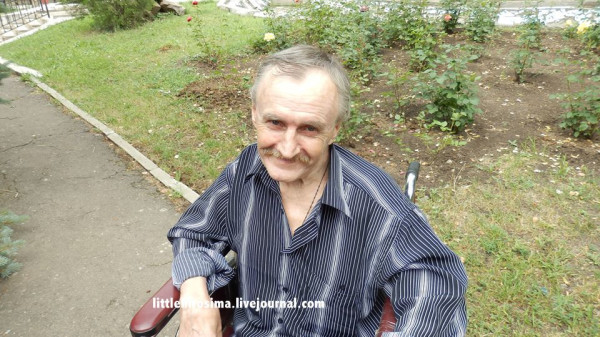 I understand that many don’t keep close tabs on my posts. Therefore I’ll provide a little detail. During our April visit when we distributed aid to Khryashchevatoye, we were brought to visit Sergey. He lived totally alone. In a barrack building under terrible conditions. His house was ruined by artillery fire during the summer. So he was forced to take shelter in the barrack. No electricity, no water–it wasn’t yet restored at that point in Khryashchevatoye. Neighbors helped him somehow. But…
He is disabled, on top of everything else, he’s suffering from progressive polyarthritis. He walked using a crutch wrapped in duct tape when we visited him the first time. He could barely walk, stumbling and suffering. Thanks to Galya Sozanchuk, we found him decent crutches almost immediately.
Zhenya, in his comments to the photographs, wrote “mustache.” Maybe it’s about the mustache. Whe I was little I loved everyone with a mustache. Sergey Vladimirovich become someone from my childhood.
But, honestly, it was about the gaze. The eyes.
We drive fairly frequently and we see many people. In different situations. And we observe different reactions.
I really don’t like nagging, even though it’s understandable. Their desire to survive.
Sometimes people cry from the heart, due to the horror of what they survived and out of gratitude. But there are those who nag, who try to evoke pity, in order to get aid. It’s hard to blame them, I get it. But it often only causes revulsion. In me. And I can tell you that we can see the second we cross the threshold whether we’re dealing with someone sincere or not. In a fraction of a second.
Do they need the aid, or are they trying to put us on. Some of them accept our food parcels with a sense of entitlement. “We’re suffering, therefore everyone owes us.” Sometimes we encounter people who cry and complain who don’t have it that hard, in comparison with other cases. Believe me, we’ve seen so many cases that we have enough for comparisons.
Sergey was one of those whom you want to help and help again. He didn’t complain, but rather was in shock that someone was concerned for him. That someone worried about him. He exudes strength as well as sadness that “he turned into a wreck.” He asked us about our work, “guys, you are amazing.” He wasn’t thinking about himself. He found hims way into my heart during the first visit.
And after our departure he suffered an misfortune. He fell and broke a leg. So that he couldn’t get up. He crawled back to his house and spent a day there in his condition. There was no phone. When he was delivered to the hospital, it was necessary to amputate his leg. He barely survived. Zhenya and Lena found out about this when they brought him aid. So they started to help right away–brought hot homemade food, kept him company.
We sent him medicines several times from Moscow, items that couldn’t be obtained where he lived.
We spent a lot of time thinking–what will we do with him? Where will we put him? Going back to where he lives with only one leg means certain death.
Then we visited him again in May. At the hospital. 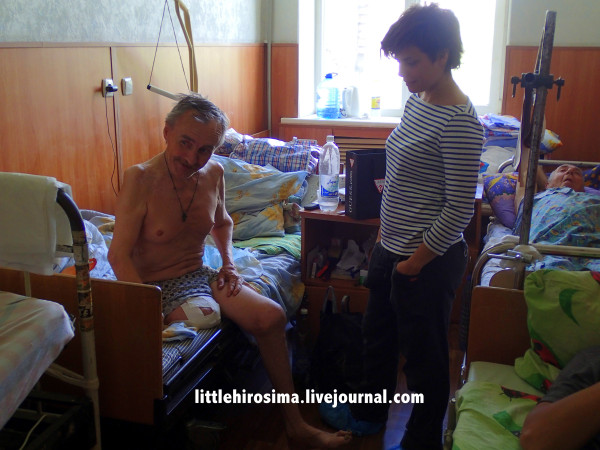 We solved the problem literally in a few days. We, or, more correctly, Lena and Zhenya, found the Retirement Home for Great Patriotic War Veterans. A very good one–with a nice garden, with benches and streams, in good condition. We helped the home with humanitarian aid and got their agreement to accept him.
When we left, Zhenya and Lena ran into problems.
In order for him to be officially admitted, he needed a mountain of documents, analyses, photographs.
Seven rings of bureaucratic hell.
Guys, you are simply heroes–I always panic before all these all-powerful ladies on whom decisions depend. They instill holy terror in me.
But yesterday, when we were practically dropping our hands, he was admitted!!!!! 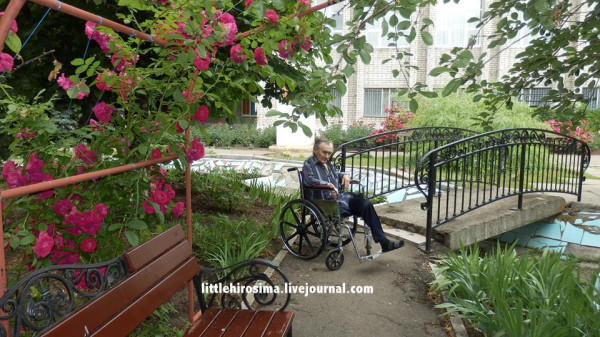 But he’s not yet out of the woods.
We found him a wheelchair, but it’s still a question of how well he can take care of himself. Will he be able to get to the cafeteria and bathrooms on his own. That will determine which division he will be assigned to.
If he is assigned among those who can no longer take care of themselves, he’ll have it rough.
Now it’s all in his hands, and he has to fight. To learn how to take care of himself in spite of his one leg, in spite of his polyarthritis.
Sergey Vladimirovich, fight! You can do it! We’re with you!
We’ll get  you a special walker. And we’ll visit and bring whatever you need.
We won’t leave you.
I’ve been jumping from joy for two days already. And it’s hard for me to express that sensation. You’d have to meet him in person. And you too would fall in love with his strength and modesty. 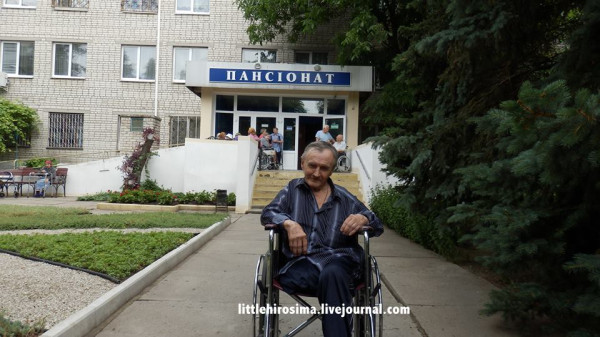 “Tornado” battalion leaks: “Without torture life is not a life” (video)

Patrushev: “Russia can’t prevent volunteers from going to the Donbass”