The Remnants of Life

The Remnants of Life

Still home, still in tears…
Tatyana Sergeyevna Ryabtseva>
It happened on August 20, at 4 o’clock in the morning. She barely made it to the basement.
Her home was destroyed, she lives with the neighbors.
Son hanged himself during winter. There’s no work
She survives only thanks to her garden and humanitarian aid. Yelena Nikolayevna, the Georgiyevka village head, said:
–He was a fine man, he didn’t drink, nothing. Nobody understands why. He probably couldn’t stand the war.
Tatyana Sergeyevna comes home every day. To look at the ruins.
–Shall we go? It’s just next door. I have a garden there.
She opens the fence gate as if someone were home. She opens the door, comes in. And stands on the remnants of her life…
Listen: Mariya Nikolayevna Kudryashova, born 1941.
Her hose is shattered. The shell flew right into the window.
–Initially I didn’t even realize I was hit across the legs.
–By shrapnel?
–Yes, five of them couldn’t be extracted, they are still inside. Unbearable pain…
. Maria Nikolayevna lives with a cousin in Georgiyevka.
Her daughter was hit and killed by a car. Only the grandson remains.
Listen to what she says about the war:

Galina Timofeyevna Vilkhovchenko, born 1939.
Can’t stand up at all.
–Galina Timofeevna, we’ve brought aid from Moscow.
–Is that true, children? Thank you.
Then she cried. 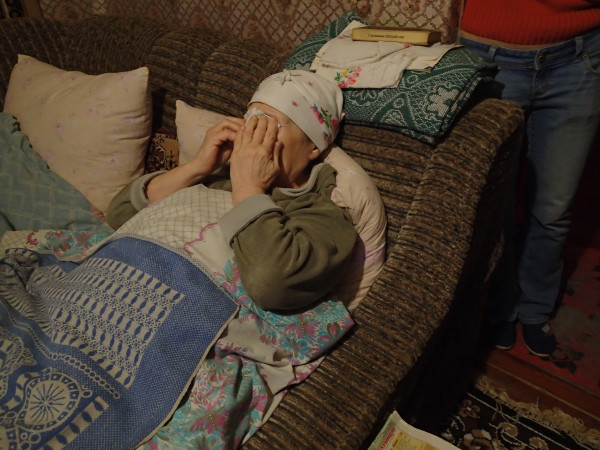 She lives alone with a daughter. There are no men at home, no children…
There is no work. 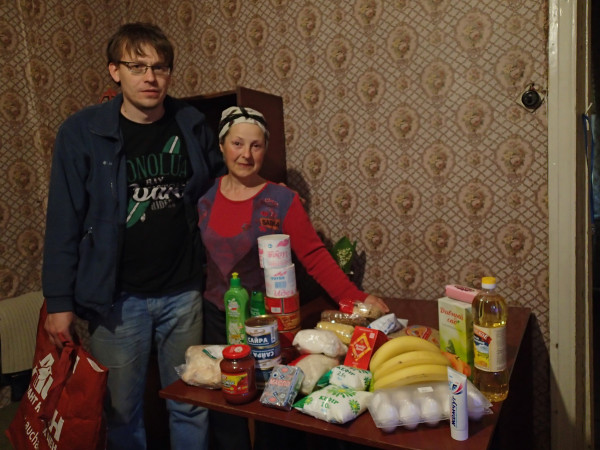 Maria Yegorovna Golubova.
Her 50-year-old daughter died shortly after the shelling ended on September 2, 2014. Her heart couldn’t bear it.
Maria Yegorovna can’t even unbend her spine. She barely walks.
She has no grandchildren.
She has to take care of her bedridden husband Aleksey Nikolayevich. I can’t even imagine how she does it. She’s helped by a cousin who also lives in Georgievka.
Maria Yegorovna did not at first understand that we came to her with aid. Once she understood, she began to cry.
–Diapers, do you have diapers? Best of Fort RussBloggersJ.HawklittlehiroshimaNovorossiaTerror
0
Share
Subscribe to our newsletter
Sign up here to get the latest news, updates and special offers delivered directly to your inbox.