I got around to doing a detailed report on the seventh van of humanitarian aid to the Donbass.
The trip was very intense, largely because it contained a lot of targeted assistance.
We have greatly increased both our geography and volume:
In addition to Pervomaysk which by now feels like home, Khryashchevatoye, Fabrichnoye, Metallist, we also helped the needy in Georgiyevka, Chernukhino, and almost made it to Gorlovka. But people practically laid themselves down before our vehicle in protest: “They are shelling there, don’t even think about it, and don’t look at me like that!”

We’ve encountered humanitarian fraud both on the border and in Lugansk itself, which I found incomprehensible.
Maybe I am still a simple, naive girl, who continues to believes in the good in people, even though I constantly write about the opposite. I want to express my boundless gratitude to everyone who continues to send us money and things for our mission.
Sometimes I get letters: “Dunya, by now they are probably sending less money? People must be tired of our problems.” Nothing of the kind. Maybe they are tired, but we are getting much more money than before. Often we get sizable sums, 10 thousand, 20 thousand rubles. Sometimes more. And it’s money from strangers. I have been fundraising for half a year, and I still can’t get used to it. Thank you, all!

I’d like to say a separate thanks to those who send us small sums. I know of an unemployed retiree who sends us 300 rubles every month out of his own pension, and he always writes “that’s all I could.” I wrote this before many times in my reports, but I’ll repeat myself: it is important for the people of the Donbass to realize that the world does care, that they are in people’s thoughts. And the attention, your attention, is worth a great deal.
Many have become regular donors, which for me was a surprise.
A separate thanks to Lena Zhukova, Tanya Anikina, Sergey Beglov, who bought medicines for our aid recipients.
Thanks to Zhenya (the Moscow one), my near-constant companion and the right hand in almost all matters. Lenochka and Zhenya, our Lugansk friends, volunteers, and simply awesome people, who are helping us in this great cause.
You know, I started to get letters in which people are worrying about me personally: “Dunya, I am reading you drink energy drinks. They are bad for you! Stop!”, “Dunya, you need to take care of yourself and sleep a lot–need to get enough rest!” There are many of those ))))
I love you!!!
Now, about the report:
As before, we bought some of the nonperishables in Moscow, together with diapers and children’s nutrition products. Here are the receipts: 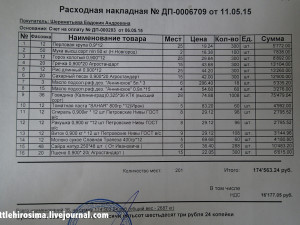 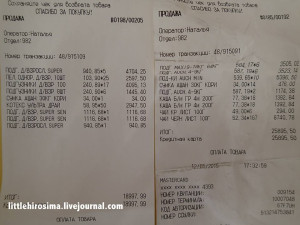 We have noticed that people in the area are on processed, condensed, dehydrated foods for almost a year, therefore we decided to buy more perishables on the spot: chicken, eggs, kefir, eggs, butter. People are suffering from vitamin shortage, and some haven’t drunk milk in a year! We also bring fruit and vegetables if it’s feasible.
We have a whole bag of receipts for those. I’ll try to include them in a separate file, as there are many of those. 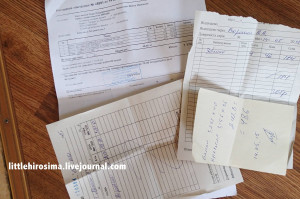 Every morning before the deliveries we drove around markets and shops to buy these products (too bad we didn’t have a refrigerator), which is apparent in the already published reports. Then we separated everything into food packets. 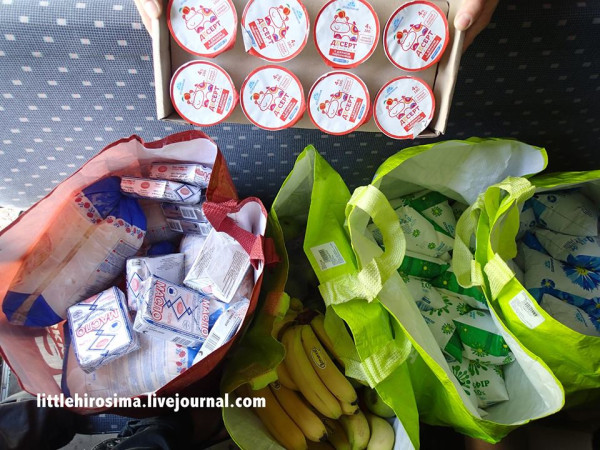 We also tried, whenever possible, to also buy household products such as soap, shampoo, toothpaste. We brought with us adult diapers for bedridden ill and personal hygiene products. We bought laundry detergent for people with bedridden sick. In contrast to food, those items are far more expensive on the Donbass and many can’t afford them at all. 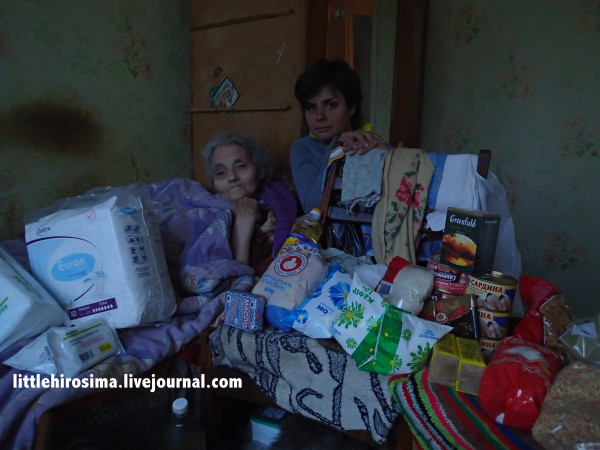 As always, we drove to Pervomaysk where we delivered a ton and a half of food:
This is a dorm for people who lost everything. We were the first to help them.
–Dunya, you brought something for us too?
I was startled, and then I saw a woman who worked in one of the community kitchens in Pervomaysk.
Rostislav laughed at once:
–Yes, soon the whole city will know Dunya. Time to make her an honorary citizen))) 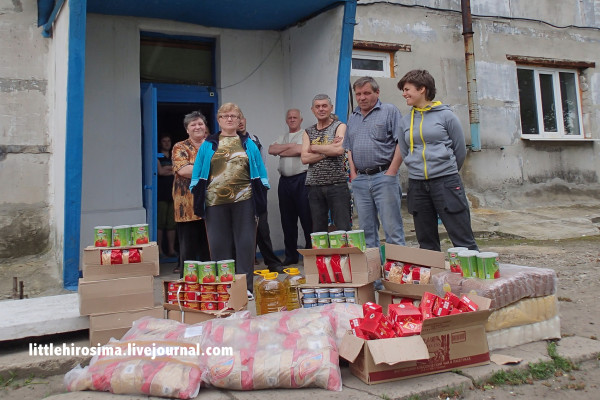 We dropped of some of the diapers, grains, and other foodstuffs to the city commandant’s office. They ration the aid on specially designated days. 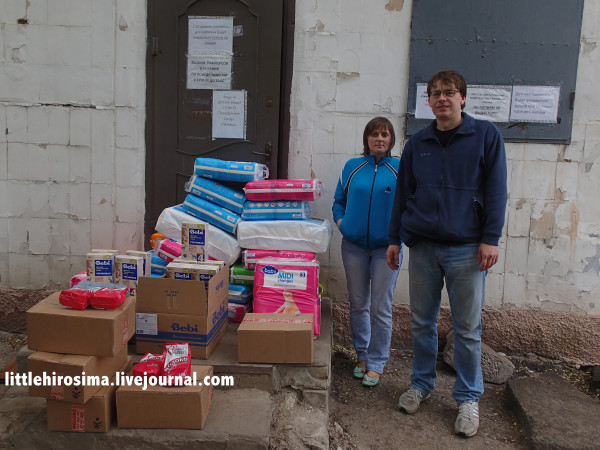 Naturally we made a stop by the bomb shelters. Relatively few people live there now. Only come there to sleep. They are empty as long as the city is quiet. But there are still people living there: 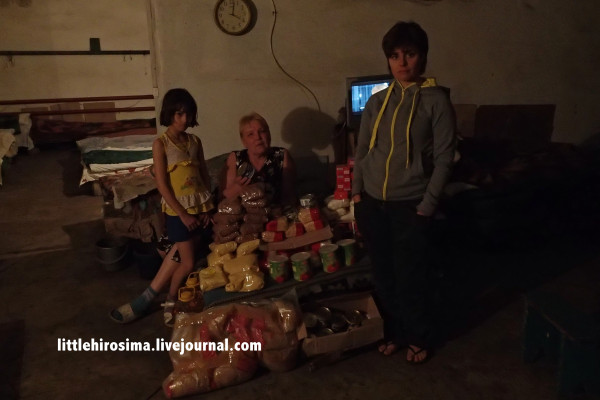 We drove by a church which operates a kitchen for the needy. About 60 kids hang out there until noon. Almost like a kindergarten.
The old lady almost never lets me go without a gift)))) We helped a family with many children (two more were sleeping when we visited). 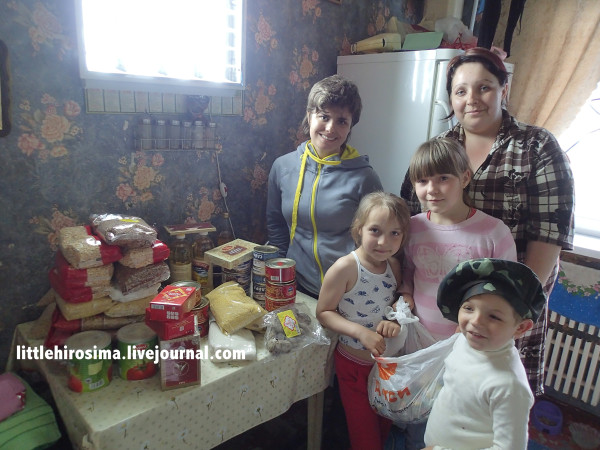 In addition to Pervomaysk, we also made many other targeted deliveries, about which I wrote earlier.
Chernukhino: here and here. Georgiyevka: here and here. We also keep delivering aid to those needy whom we have “adopted” a long time ago–here. Some of the products we left for Lena and Zhenya, our Lugansk colleagues and my friends, to deliver–here. As to the clothing, some we distributed among families, and the rest we delivered to the social protection fund and the Krasnoluch orphanage–here. We delivered aid to the Great Patriotic War veterans home–here. We took Vika under our care (here) to help with her diabetes. We visited Sergey Kutsenko (here) who lost a leg. He is in process of being enrolled into the veterans home I mentioned above (which unfortunately takes a lot of time). The situation is under control–we got him a wheelchair as well as people to help him until he is transferred.
Those are far from all the stories (I haven’t yet written about our aid recipients in Fabrichnoye and Metallist), but I’ll publish them in the near future.
I have recently begun to upload the certificates of appreciation which I receive after every visit. Incidentally, they are very helpful when getting through customs.
I want to emphasize that these certificates, even though they have my name on it, are all about you! Big thanks to you! For your caring and love for people! 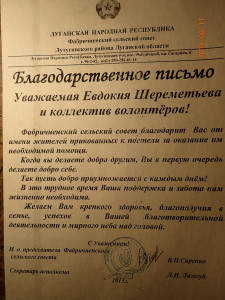 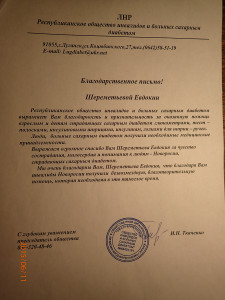 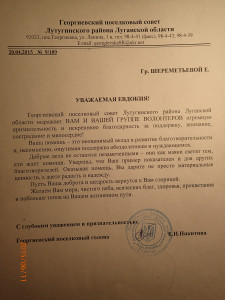 The next trip is planned for the second half of July. In the meantime we are continuing to help many by sending money and medicines by bus.

P.S.: I’ve read my own report and thought, dear God, how did we manage all THAT?

“Yanukovych No. 2 will be the EU’s fault”

Severe blockade of Donbass can be expected – Ukrainian MP