The Situation on the Donbass

The Situation on the Donbass

[To view Yevdokia Sheremetyeva’s other dispatches from the Donbass, click on the “littlehiroshima” tab above the title.]

I have long wanted to write about the humanitarian situation on the Donbass.
I’ll say right at the start that I am writing on the basis of my personal experience, and the experience of humanitarian workers who are personally known to me.
I know the situation in the Lugansk District relatively well, but not in the Donetsk one. Many say it’s pretty much the same, thought they get more deliveries.
Donbass retirees have been receiving their pensions during the last two months (1200 hryvnia=2400 rubles). Plus various benefits for the disabled, single mothers (870 hryvnia), etc. But pretty much all information had to be resubmitted for the latter.
One cannot say this is enough to save the situation, but I do see a major difference in comparison with the winter.
In December-January the situation was catastrophic, at times one could talk of famine, without exaggerating. 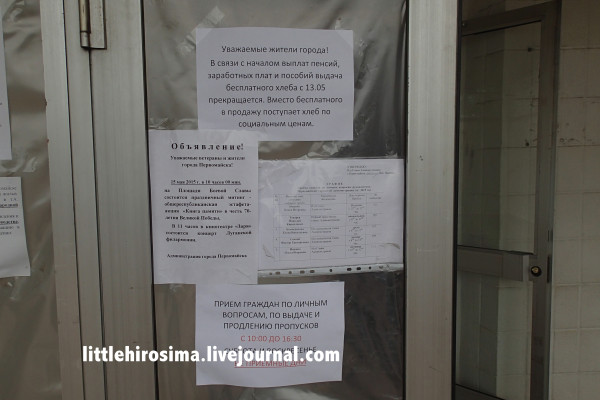 Many towns and villages received no aid at all, for example, Khryashchevatoye, Georgiyevka.
Khryashchevatoye just recently had its electricity restored, though it still lacks water supply in some parts.
During the winter the people were simply surviving. Without any help. “Not in the war zone”–most of the aid went to the regions that were directly affected by fighting, such as Debaltsevo, Chernukhino, and others. The small villages were all but forgotten.
Pervomaysk in winter was a disaster zone. Nothing was delivered since last summer. The city was, and pretty much still is, almost in a UAF/National Guard encirclement. It’s been more quiet lately. Although most recent reports suggest they’ve been shelling it again. And not half-heartedly.
When we made deliveries to communal kitchens, the workers there were practically in tears. And it wasn’t an act.
Children in the bomb shelters threw themselves at candy which they haven’t seen for so long.
Now both the bomb shelters and the kitchens receive regular food deliveries.
It was obvious in the homes we visited that they were absolutely empty of food. Now it’s clear there is food.
However, people have spent the last year living on canned meat, grains, and other non-perishable foodstuffs (tea, sugar, powdered milk).
That’s the top priority for deliveries, which makes sense.
Many of those who still have farms survive thanks to them. A cow, goat, chickens, ducks, etc. Though many have to be slaughtered, as there is no feed…
However, those who have spend that entire time in the cities, and those who have lost everything due to shelling (and there are many of those) haven’t had an opportunity to drink fresh milk this entire time. People are beginning to suffer from vitamine shortage as a result of eating only processed foods.
That’s why during our last trip we tried to buy on the spot a chicken, milk, yogurt or kefir, butter (some haven’t seen it for a year) eggs, to add to our food packets. We always tried to bring some  fruits for the kids–bananas, apples (which can be bought relatively cheaply on local markets). You can see those on our photographs. 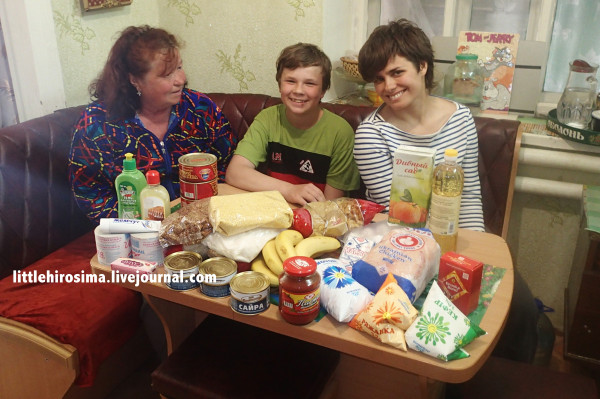 But the biggest problem right now concerns the working age population. Many simply have no work. Those who have it don’t receive salaries. The retired and children get aid of some sort. But the healthy adults get almost nothing. They are now the most vulnerable segment of the population. It’s hard to imagine, but the physicians, nurses, first aid teams who drive out to help during curfew, firefighters, utility workers rebuilding the city’s infrastructure under bombardments, don’t get paid.
My friend Yulya is a social worker. She doesn’t get paid, but she still has to buy four bus tickets every day (she has to get to the other side of Lugansk). Her relatives help, but she lives off her parents’ pension (which they received for only two months during the whole year) and humanitarian aid.
The situation with medicines is equally catastrophic. Pharmacies are empty–only streptocides, analgesics, activated charcoal, etc. If you need anything else, it’s a problem.
We get constant requests for medicines. Some people even offer money–“Please, we’ll pay, but there is no place to buy it here.” It’s especially hard for people who need the medicines to remain alive. For example, the diabetics. While insulin is being delivered, it is often of poor quality, which is why many diabetics’ condition is worsening. On top of that there’s a problem with the quality of nutrition (which is fatal for those suffering from sugar diabetes), freeze-dried foods, lack of fresh vegetables and fruits.

With all that, I thought it astonishing that the shops have everything. You can buy all the necessities on the markets and in shops (though there aren’t many of them–the majority have closed). The shelves are stuffed. But people simply have no money. So only the few can take advantage of it, those who had money before the war, or those who get help from relatives. It’s a crazy line of alienation, no other way of putting it.
On the plus side, the planting season is in full swing. Everyone is gardening. So long as the shells don’t fall. So overall the situation has gotten better. But it’s not all fine and well yet.
The working population is in a very difficult situation–there is no money at all, and humanitarian aid only helps them survive.
There still exists a serious problem with fresh, perishable, foods and medicines. Another humanitarian disaster can occur in the event of an offensive. Because it is always the civilian population that is the first to suffer, and the civilian infrastructure which, as experience shows, are deliberately targeted.
Many humanitarian workers wouldn’t go in the face of shelling. And then the deliveries would stop.

Krasnodon hospital: before and after (photos)

Texas: About his Spring-time Fighting Near Donetsk Airport