Too Horrible to Believe

Too Horrible to Believe

While we are collecting money for our next visit to the Donbass, Zhenya and Lena, our Donbass friends and fellow volunteers, are still distributing the aid we hadn’t managed to distribute ourselves. And I haven’t even published all the information from our last trip. I’ve included photographs and Zhenya’s comments to accompany them. But first, I’d like to add a few words of my own.

There are many elderly and disabled who are entirely on their own. I’ve already written about the elderly who have been abandoned by their parents here. But there is also another problems–many of them have relatives in Ukraine who have stopped contacts with them. All contacts. They changed their phone numbers, they don’t pick up the phone. Unfortunately, I encounter such situations so often that I take them as a given. As a fact. Therefore I am always surprised by the society’s disbelief on this matter. Discussions of the sort “you shouldn’t have gone to vote–now you’re getting what you asked for” are the red thread of this war. For me probably what’s most horrible. Precisely that. It’s as if people have lost their mind, at times you want to agree with the trolls’ comments  that it’s all lies and zombie-Kiselyov propaganda. Because it is too horrible to believe…

“Anna Vasilyevna Korbich. Diabetic, Type A. A woman as tiny as a sparrow, always called me ‘my dear’. She always sounded so kind, as if resigned to her fate. She was hit by a car in 1985. Disabled ever since. Her son died in childhood. Relatives in Chernovitskaya District have changed their phone number, so she wouldn’t call. It’s the effect of the Maidan. But this tiny fragile woman is not surrendering, she works as a trainer in the Danko disabled society. She is the shot put team captain and the 200m and 400m wheelchair races. She has a ton of awards. Even during the shelling, she kept calling to support her team members, those who remained under the shells. When communications were out, she went out in her wheelchair, whenever she could she asked the neighbors to go out and check. She enjoys a great deal of respect, as I was leaving her 35-40 year old neighbor brought her a bowl of soup.” 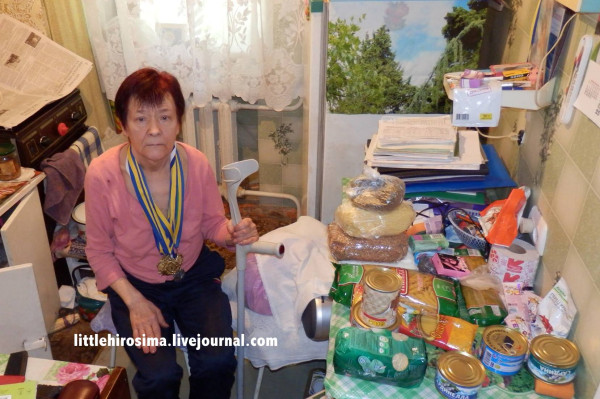 “Yelena Vasilyevna Berezyuk, born 1937. Alone. Since. When the war began, her cousin called from Kiev and said, “You are a terrorist, you asked for it, it’s your fault there is a war, I don’t want to know you.” Changed her phone number. Just like that.” 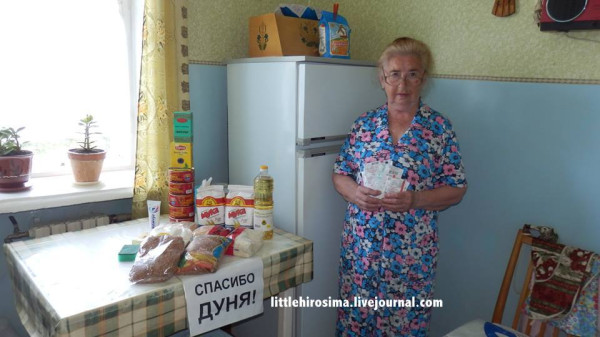 “Two medical workers from the orphanage in Krasnyy Luch brought Lyubov Ivanovna Zhidovlenko adult diapers, on Dunya’s behalf, for her mother who has been paralized after suffering a stroke, as well as medicines for her disabled husband. During the shelling the woman helped several childrens’ establishments without getting paid for it. She still isn’t drawing her salary, she received only 25% for the last month and that’s it. She would bring food from her own home to feed the orphanage kids. That’s the kind of people they are. They also collected summer clothing for a kid, except for the shoes.”

Many thanks to Tanya Anikina and Sergey Beglov who helped buy medicines for them. 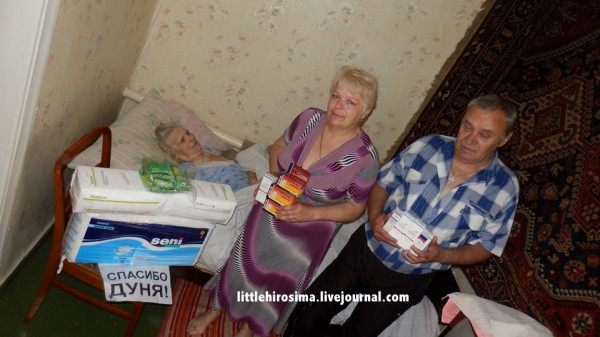 “Lyubov Mitrofanovna Lysenko, born 1941. To make long story short–pure chaos. Her son was some kind of a criminal during the ’90s. Then he had some kind of an epiphany and three years ago he became a monk at the Kharkov Monastery. Hasn’t called in two years.
There is a daughter. She lives in Russia. SHE HASN’T CALLED ONCE SINCE THE WAR STARTED…Some kids…” 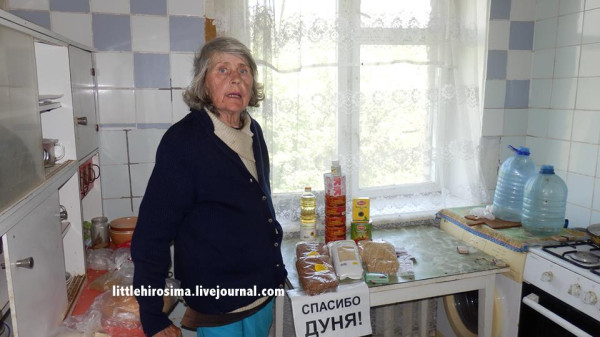 “Svetlana Sergeyevna Zotova, born 1941. Disability, 2nd class. Problems with her spinal column and head. Gets help from her brother, 63 years of age, who has a 3rd class disability due to a heart attack and a stroke. Therefore he’s not of much help…” 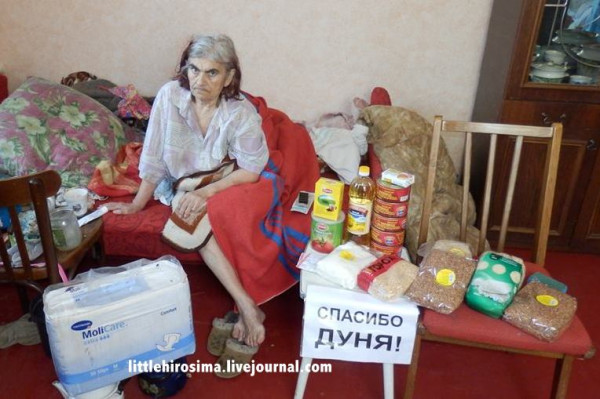 “Valentina Ilyinichna Kruglaya, born 1938. Retired. Alone, has nobody. Received her retirement pension only twice in the last year.” 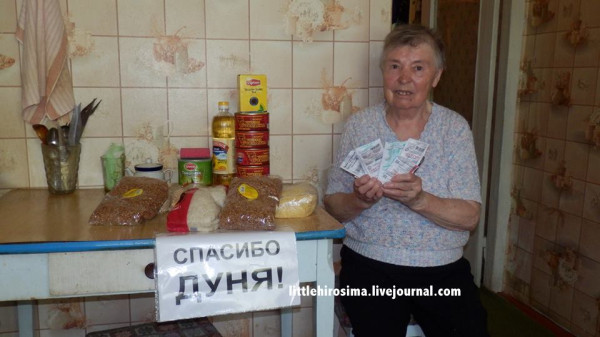 “Valentina Vasilyevna Kharlamova, born 1935. Lives with her daughter Galina, born 1960. She worked at the AVK, which laid off all of its workers a year ago. She worked there for 37 years without a respite. They aren’t sending her pension, citing Ukrainian laws. They live off 1200 hryvnia per month. They eat at the church cafeteria. Says she always wants to eat. They collect cabbage leaves and spoiled vegetables at markets. They started to cry when they realized we brought them food.” 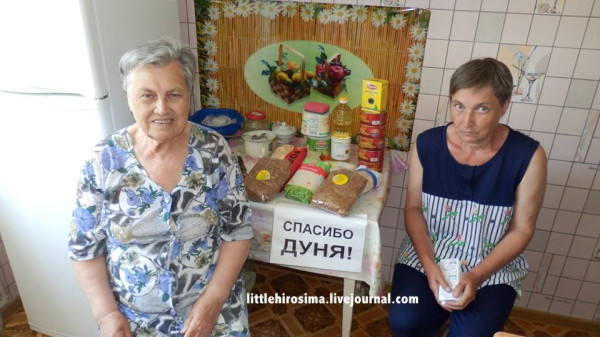 Polina Fyodorovna Gordeychuk, born 1937. Alone. Has nobody at all who might help.” 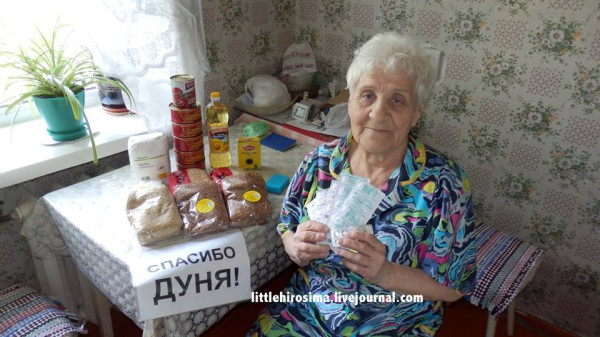 “Valentina Ivanovna Starovoytenko. Born 1943. Her daughter fell under a spell by a religious sect. Now she could not care less about her mother. Valentina Ivanovna lives with her grand-daughter Marina Fyodorenko, born 1995. She is a first-year student at the teachers’ college. They live off grandmother’s pension–1200 hryvnya a month. The old lady actually tried to give us back our own canned meat. Can you imagine?…
The most awful is that in almost every case they try to pay is 9 hryvnya or offer us some of their food, with the words: “Maybe someone needs it more than we do?” 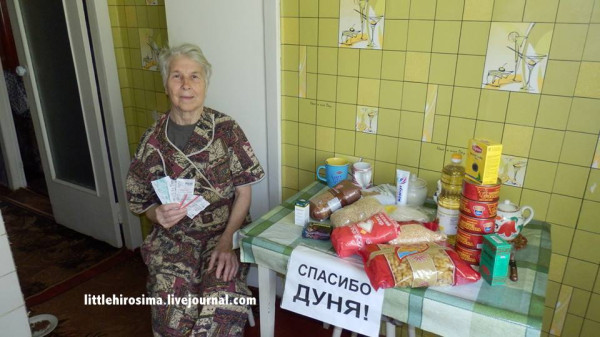 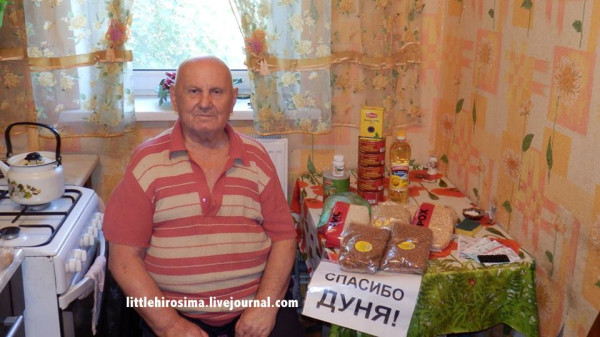 “Lyubov Ustinovna Ponamareva. Born 1939. When asked ‘whom do you live with’, the granny started to quietly cry…barely managed to calm her down. She lives alone. Husband died in December 2014. Has two sons, each has two small children. The sons are tearing themselves to pieces trying to find work…The granny is more worried for them than she is for herself…” 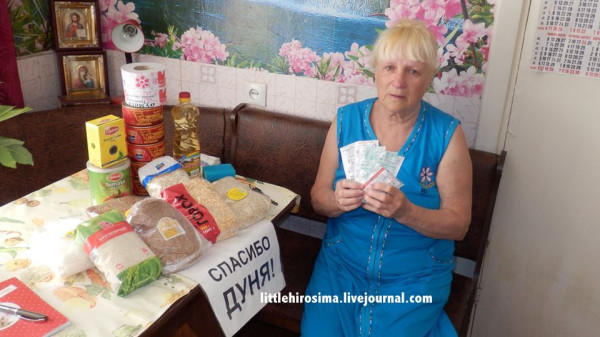 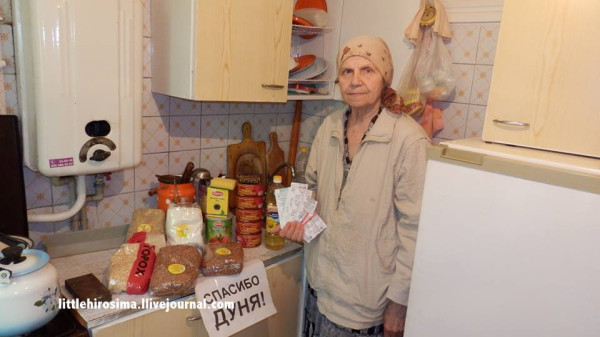 Thanks to everyone who transferred money, who helped purchase the necessary medicines! Pardon me for all the “Thank you, Dunya”–it really means, thank you!

Best of Fort RussHumanitarian CrisisJ.HawklittlehiroshimaNovorossiaTerror
0
Share
Subscribe to our newsletter
Sign up here to get the latest news, updates and special offers delivered directly to your inbox.