The border town of Mukachevo experienced a firefight between Right Sector militants and police. The militants were surrounded, and the police called on SWAT reinforcements and the National Guard. They entered into negotiations in order to have the Right Sector lay down its weapons. In response, the Right Sector alerted all of its forces in Ukraine.

The firefight in Mukachevo, in the country’s westernmost point within 30km of Hungary started on Saturday around 2pm. 20 camouflaged Right Sector militants drove into the town in cars bearing Right Sector decals. According to the Transcarpathian Region Prosecutor General Office, they scheduled a meeting with local inhabitants in a local cafe where the firing started. Rada deputy Mustafa Nayyem wrote on facebook that the meeting was to occur in the Drakon restaurant, but was eventually moved to the adjacent Antares sports complex.

“Both of these establishments are owned by Rada deputy Mikhail Lanyo,” reported Nayyem, who arrived in Mukachevo in the evening in order to establish what had happened.

“They walked up tot he door and asked the security person to summon Mikhail Lanya. After an exchange of words, the security person was shot in the head. He is now in a coma in an critical are unit. The 911 dispatcher received a call at 1:20pm that camouflaged individuals have closed off the Lermontov Street. Vitaliy Shimanyak, the city police chief, arrived at the scene. He was issued an ultimatum to disarm. When he refused, firing broke out–Right Sector fired in the air and detonated a smoke grenade. SUVs rammed a police vehicle and a chase ensued,” Nayyem writes.

The vehicles reached the town’s outskirts where the police organized an ambush at a gas station, blocking the street with own vehicles. But their adversary shot up the cars from Kalashnikovs firing from the Right Sector vehicles. Local inhabitants said they could hear rifle shots and grenade explosions. A gas station on city’s outskirts caught fire.

“We know there’s one critically injured individual with a head wound. Five SWAT police and one driver suffered wounds. A grenade launcher was also used, according to paramedics,” reports Mukachevo.net. Poroshenko soon issued a statement ordering the MVD to arrest perpetrators.

MVD head Arsen Avakov quickly issued a statement that the militants are surrounded and are being asked to surrender. He confirmed the militants destroyed two police vehicles and described the casualties: four locals and three police suffered wounded, two of them critically. Right Sector representatives said in the evening that the police opened fire first and without warning. RS chief for the Transcarpathian Region Aleksandr Sachko appeared on TV Channel 112 and explained that there was a third party participating in the fighting, bandits against whom the Right Sector was fighting.
“Unfortunately the police supported the bandits…opening fire on our militants. The bandits didn’t want the Right Sector in the region,” Sachko said.

Right Sector press service also announced its losses: two killed and four wounded. “Having evacuated both the dead and the wounded, the unit fought its way out of the bandit encirclement and withdrew into the mountains,” says the Right Sector press release. (Incidentally, Rada deputy and Avakov’s advisor Anton Gerashchenko announced three attackers were killed.)

The entire RS was put on alert. “Special operations troops are being put on alert in order to destroy our comrades. If it happens, it will set off an irreversible process. We won’t allow anyone to kill off our comrades,” says the RS announcement.

The RS release also names those whom it considers the participants in the Mukachevo clash: Rada deputy Mikhail Lanyo.

“Our demands are as follows: an immediate public arrest of Lanyo, who personally participated in the events, the arrests of all the bandits and police who opened fire, and those who gave the order,” says the RS announcement.

RS represeentative Andrey Sharaskin clarified that the Mukachevo blockade is due to smuggling which was allegedly interdicted by the RS militants. He said that RS leadership received threats due to its attempts to stop smuggling operations.

In the meantime, Mukachevo saw a special operation unfold in full swing. The RS militants were blockaded in a forest or, according to other information, in the sports complex. An operational HQ was established in the region whose staff includes one of SBU deputy directors. Special operations troops and National Guard have been deployed there. SBU representatives called on the participants of the firefight to lay down their weapons and surrender. It was refused by the Right Sector.

It appears that RS leader Dmitriy Yarosh was on a vacation. He announced at 8pm on Saturday that he’s going to Kiev in order to avert bloodshed. Right Sector representatives scheduled a meeting in front of Poroshenko’s administration for 8pm. 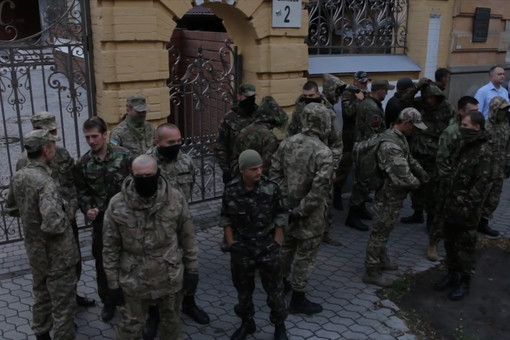 In the meantime, negotiations with trapped RS militants continued in Mukachevo. Gerashchenko wrote on facebook: “I was reached by phone by the commander of militants blockaded in Mukachevo, callsign Letun, who requested to be connected with SBU counter-terrorism center leadership in order to enter into negotiations to end the armed standoff, render aid to wounded militants. I did what he asked.” He believes that the situation will be resolved in a matter of hours in a lawful fashion.

He also said that the smuggling claims will be investigated. “All the media-announced information concerning possible police protection for smuggling operations conducted by Mikhail Lanyo’s associates and his boss will be thoroughly checked by the SBU and the MVD as part of the counter-smuggling operation,” Gerashchenko wrote.

Nayyem also wrote that the locals say the conflict concerns the smuggling of cigarettes. “Local inhabitants’ information indicates that all the parties to today’s conflict are complicit in smuggling. Some were doing the organizing, others collected protection dues, yet others provided security,” Nayyem wrote on facebook. He noted that the smuggling involved sending the cheapest sorts of cigarettes from Ukraine to Germany and Italy.

“In any event, it doesn’t justify the Right Sector’s use of heavy weapons on peaceful territory,” Nayyem wrote. He called on Yarosh and Lanyo to explain to the public what had happened in Transcarpathia.

Explaining the attitude toward the RS, Gerashchenko said: “MVD is not fighting against patriots.” He also said that the police has the right to open fire on people armed with grenade launchers.

“The police has the duty to prevent armed clashes, no matter who the participants are. And to use weapons in cases where the law allows it, including when its officers are fired on by grenade launchers on the streets of the quiet Transcarpathian town of Mukachevo.

The most recent information suggests that three people were killed and 11 were wounded. Ukraine’s Prosecutor General office launched an investigation of the Mukachevo shooting on the basis of two articles of Ukraine’s Criminal Code: article 258 (terrorism) and article 255 (establishing a criminal organization).

It would appear that the Right Sector SUVs references in the article above bear…Czech license plates. Well, that’s one way of pursuing Eurointegration…

Mukachevo Postlude: Right Sector threatens Kiev: “If we have to, we’ll send reserve battalions against the Presidential Office and the Interior Ministry”