Translated from Russian by Kristina Rus

Well, who would have thought! As soon as I finished to publish a series of articles about the sensational, a century old, social experiment in the Sumy region (Ukraine) on the building of a Christian-Communist community “Labor Brotherhood” (http://sumy-grad.livejournal.com/136753.html), I received an interesting letter.

The author announced the incredible news: it turns out that in Russia a similar community has been around for several years – as communist as it gets. But not religious – secular!

Well, for me it was an even greater bombshell than the old social experiment in Sumy! Moreover, the author, himself a member of the community, invited me to visit – to take a vacation and to give a lecture about Neplyuev and his Great Project.

Naturally, I left all the pressing tasks, and embarked on a long trip.

… I lived in the community for three days, communicated a lot (which is natural, because “community” and “communicate” – are words of the same root. 🙂 [in English and in Russian – KR]) and I am ready to present to the reader a short report about this modern phenomenon. (The long report will come later on, when I will more fully digest what I have seen.)

It is not so interesting to detail the material aspect of life of the commoners, whom there are already quite many, because it seems quite trivial. The people have collectively acquired an abandoned factory in one of the villages. Quickly, within two years, restored it with their enthusiasm and are living off its products. In the nearest plans – upgrading part of production capacity to high-tech.

Where do they live? Here, too, there is nothing original. It is clear that the local factory, which was owned in the post-Soviet period by a successive chain of young Russian bourgeoisie, unable to grow it to produce a personal gain, is not only large production facilities, but ordinary single-storey structures. And for the enthusiastic commoners, people quite innovative and with imagination, it wasn’t too difficult to repair them and create residential conveniences and comfort.

I visited the residential quarters. Ideal cleanliness, order, no mess (although there are a lot of children). It was very comfortable to be in their “residential zone”.

About the children. Almost all supporters of community life arrived there with families. A lot of attention is given to children, their education, development as in the “Labor Brotherhood”. There are various classes, led by either community members, or teachers of the village school, located near the factory.

It is clear that since the community was established relatively recently and the number of its members is not so large, it can’t afford a private community school (although it is in the plans for the near future). I saw their children! Open, happy faces. You know, like from Efremov utopias!

The day begins with an intense 30-minute workout, which is joined by many dozens of people – all the adults, except for those working at the time. The workout is conducted by an experienced instructor from among the community. I also took part in this collective activity one day. Everything seems simple, but… I felt a new feeling of some human togetherness, when everyone is doing the same thing at the same time.

The same sense of collective togetherness is experienced, when together with adult settlers and their children you sit on the benches at long tables in the communal dining room. Although everyone has the opportunity to cook and eat as usual, in their family circle.

Lunch break is usually not practiced. In the community there is so much work that people rush in a hurry after lunch to their places of work. And, they don’t work from 9 to five, but as long as necessary. Often until late at night. No one is pushing anyone, which looks somewhat unusual to the outside observer.

I visited the working facilities, so far – two fully renovated. Quite modern equipment.

But the material side of community life – is not the most important, what deserves a detailed description. The most interesting and unusual thing here is – the people themselves, with their high moral level. In three days I stayed there, I have not heard any one swear word, not to mention unprintable words! The people are intently, seriously working, and at night…

The nightlife of the community is perhaps the most interesting and peculiar, what actually caught my attention. In the village there is a cultural center [as every Soviet town used to have a ‘House of Culture’], which is filled with books on the shelves up to the ceiling. Here are the classics of Marxism-Leninism, Losev, Berdyaev, Bogdanov, Tolstoy, Dostoevsky, Shakespeare, Goethe… I think, up to five thousand volumes of serious literature. That is quite analogous to the library of “Labour Brotherhood”. I did not notice any modern crime novels with naked ladies on the bright covers. 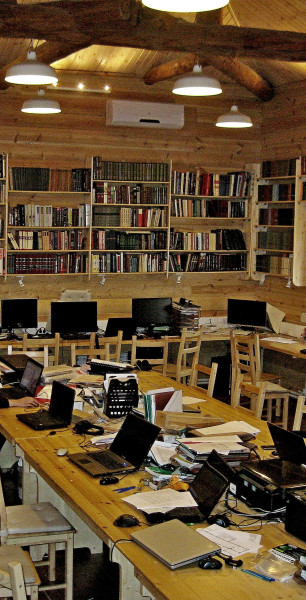 In this cultural center I read an hour long lecture on N. Neplyuev, which provoked a lively discussion. And, interestingly, the lecture began at 12 am! Because the working and night hours are already filled.

I repeat, the biggest impression was left from the community members themselves, their high moral and intellectual level, their desire to improve, to rise. Among them there are quite a few famous humanists who left comfortable apartments in their cities and moved here to simple dwellings.

In conversation I was trying to find out the motivation for this move: maybe family problems, lack of work … No. Oddly enough, all community members, young and old, – are quite successful people with sought-after professions. And motivation of resettlement to a communist community was virtually the same – to get away from the surrounding impurity, immorality, lack of culture and other social vices.

Physical labor at the factory takes three days a week. The rest of the time is devoted to self-education, cultural life.

The difference between this community and “Labour Brotherhood” of Nepluev is that Neplyuev started from scratch. He raised highly ethical, hard-working individuals from ordinary village kids, who then became members of the community. Here the community is formed of people already educated in the Communist ideology who have absorbed the Soviet values and Soviet culture. It is these personal characteristics that are the main criteria for acceptance into the community. That is, no one talks about “tolerance”, and no one says “how great that we are all so different”. Because everyone has the same mindset. And I must say that to be among people with whom you have the same worldview, the same understanding of Good and Evil, is extremely comfortable. One of the same!

The community has its own beautiful summer resort where people from different cities of Russia come for vacation. (I have not met anyone from Ukraine).

And one of the main reasons to have such a resort (along with the usual desire to earn income for the community budget) to educate visitors from the “outside” world, to tell them about the essence of the Soviet project, the reasons for its failure, to talk about the essence of Communist ideology. Also, if someone has a desire to organize a similar community in their region, it is possible to come here for a few days, to live, and learn from the experience…

Russian-Soviet-patriotic education is on a high level: 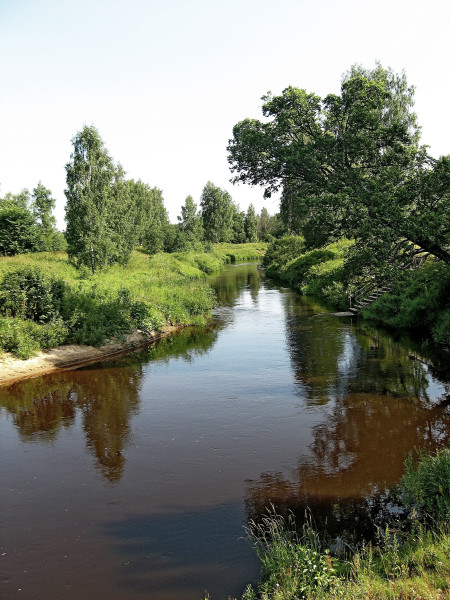 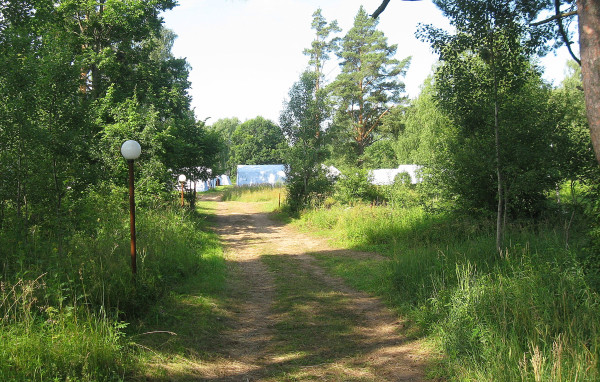 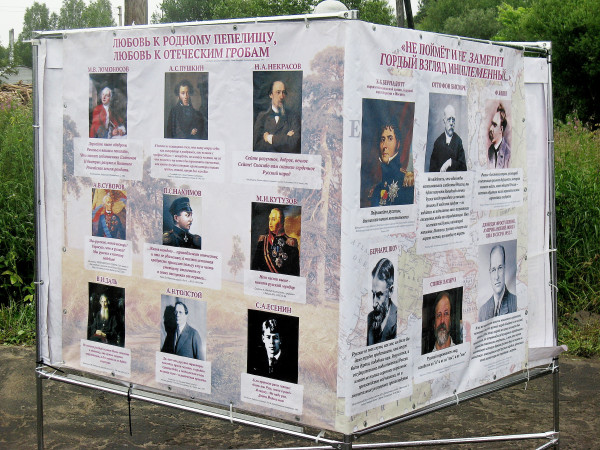 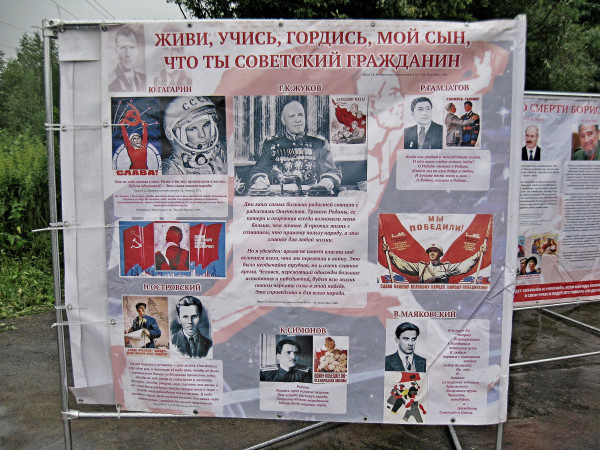 Well, what are the cons, what didn’t you like in this community, asks the impatient reader, educated by Russian (Ukrainian, etc.) school in the anti-communist spirit.

I discovered nothing repulsive there. The goal of every communist project, as I understand it, is to create an ARTIFICIAL environment that does not have a place for human vices. That is, people agree in advance about their values and anti-values. And in accordance with this understanding live their lives.

How to become a member of the community? Probably only by reference. There is a unique microclimate, unique system of relationships. However, this is not for me to answer.

I will say that community life as I saw it in real life, would not attract all good people. Before writing this article, talked about it, this community life, to my friends, acquaintances, relatives… All shrugged and twisted a finger at a temple. 🙂

Does the community have a future? Probably does. Even if this life attracts one percent of the population (as the kibbutzim in Israel), it’s hundreds and hundreds of thousands of potential settlers.

Personally, if I was younger, would probably accept this way of life.

Best of Fort RussBloggersCommunismEconomyFeatureIdeologyTrends
0
Share
Subscribe to our newsletter
Sign up here to get the latest news, updates and special offers delivered directly to your inbox.