It’s unbearably hot in Lugansk. Everything is melting.
The trees are shrouded in smoke. Surreal atmosphere.
Drones are being shot down over Lugansk for the second night in the row.
Sounds like gun salutes all the way until morning.
It seems like they are shooting from the adjacent block, but it’s actually far away.
The customs was, as usual, an experience. 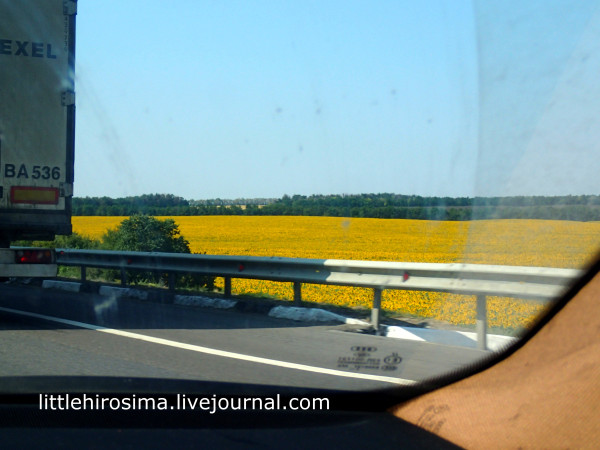 This time we drove a car–we packed a few used things, a wheelchair (sorry, Kolya, we didn’t have room for yours, we’ll bring it next time) and medicines.
The rest we buy on the spot. But the main thing we were transporting is something you can’t get on the Donbass–insulin. Which requires cold storage.
There is a 2km long line of buses at the border and streams of people who cross the border on foot.
We cover our heads and shoulders with napkins, towels, anything, in order to avoid getting sunburned. There isn’t a single tree in the vicinity–nothing. Just the burning southern sun.
People in the crowd talk about one thing–Donetsk, Gorlovka, pensions, and war.
–It’s quiet where we live. It can’t go on.
–It’s quiet some places, not so quiet elsewhere.
–Ah. You from Gorlovka? We’re from here, Krasnodon. This is home.
Many hours of waiting in the heat, a long line of cars which barely crawls toward its destination.
And the ice is beginning to melt, the refrigerator is failing for the second day in the row. And inside is the insulin which is a matter of life and death and which needs cold temperatures.
And there is no end in sight. We haven’t slept last night and now we are slowly losing our minds. It’s our second day on the road.
In the meantime a drunk girl was dragged off the bus. He’s giggling and walking barefoot. She can barely stand, her girlfriend is hiding her from the onlookers’ eyes.
People are covered with flies, the dumpling ladies are weakly inviting everyone to sample their home baking.
A crowd of children with wet hair and aunts who fan themselves with pieces of paper, notebooks, and newspapers. 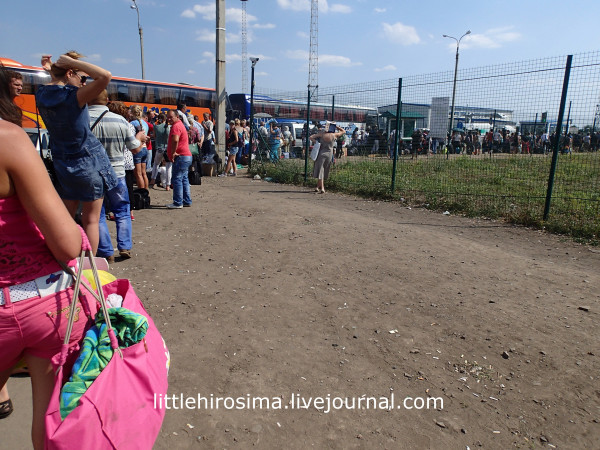 The men are smoking one cigarette after another and don’t know what to do with themselves. Can’t walk away too far, because the line could move at any moment.
Bus drivers are discussing their schedules:
–Last time I spent more than a day and a half. And then got through in an instant. You never know.
I feel things are not going well. I decided to risk everything.
I went up to the beige vehicle at the front of the line. I stretched my shoulders, picked up the refrigerated and now I’m begging with tears in my eyes:
–Pleease! Five more hours and the insulin is done for. Pleaaase!
He looks at me, at the refrigerator, then again at me.
What had the greater effect, the cleavage or the refrigerator? I’m thinking the cleavage.
I get get the packs and start shaking receipts and boxes in front of his face. Doubts set in.
I make the cleavage bigger.
–OK.
I exhale. We drive to the front of the line. All the neighboring cars look at me with fury.
–We don’t remember you.
Then a phone call from friends on the other side of the border.
–Guys, there’s a forty truck humanitarian convoy returning to Russia.
Facepalm.
Insulin.
My eyes are inflamed and red. My legs are faltering in the heat, heat, heat.
The line stands still for two more hours. The car is hot and the seats are like the sand in the Sahara–you could fry an egg.
–Zhenya, we have to turn the A/C on full blast, otherwise the insulin won’t make it.
We turn on the A/C. My head is spinning. We leave the car.
I close the door. And…it locks. I don’t know why.
Zhenya looks at me. The keys are inside.  EVERYTHING is inside. But we are outside.
The car is locked. Don’t know why.
It’s difficult to convey feelings after a day of no sleep, in the heat, and with frayed nerves. But it was something akin to a catharsis which had to come but for some reason couldn’t.
The line could move at any moment.
I’m beginning to panic.
The entire male complement of the waiting line forms a committee to establish how to break into the car with the least amount of damage.
–From the trunk.
–Take off the moulding.
–Break the rear window.
I’m running around in panic, the ladies standing nearby are calming me down.
–Let it go, the main thing is that you are whole and healthy. It’s no big deal.
I’ve never seen people come together like that. Though enormously worn out, they came to life. They started to actively help and empathize. The men brought tools, water, rags, masking tape.
In the end–we break the glass. 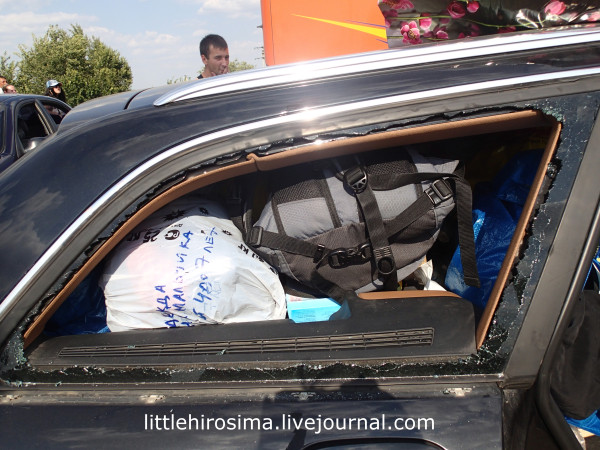 And then we cover the hole with masking tape.
The line moved almost immediately after that and we took off.
It’s never been easier to clear the customs.
The only thing that attracted attention was the broken window.
All the border guards and customs officials felt so much pity for us that we cleared the border in an instant.
Though we looked beaten.
We were welcomed by huge fields of sunflowers, corn, and wheat.
Half the Donbass is mined and any place can blow up. One could hit a mine on any field.
And even the fields that were cleared can be dangerous. Everyone who plowed them is a hero.
A deceptive summer and heat where beautiful girls walk around with bare legs and kids run in the streets.
A deceptive summer from which war has not departed.
Donbass, we’re here. Greetings.