–How’s Vika?
–How’s the operation? What about her eyes?
We’ve been waiting for a month.
We measured sugar every day, did everything to help Vika’s state return to normal and her sugar level to stabilize so that the operation can take place. The operation to save her eyesight.
And just recently, though with delay, the operation took place. 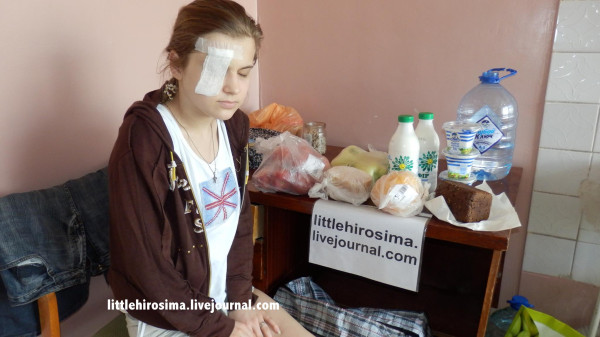 Those who are new to the case should read earlier posts concerning her situation.
The situation as of today is as follows:
An anti-glaucoma surgery was performed on her right eye on Tuesday. They can’t operate both eyes at the same time, apparently.
Lutsentis, an expensive drug which we sent from Moscow, will be needed in only a month.
The next operation was performed in order to stabilize (or equalize?) pressure within the eyeball. Vika is in hospital right now.
We’ll know the results in three weeks and, if everything is in order, she’ll receive Lutsentis and a laser coagulation surgery.
Once again, as a reminder to physicians and specialists, if we missed a detail or wrote something wrong, please go easy on us. This is second-hand information, from Zhenya (my right hand in Lugansk, a volunteer and a friend), which means I may have gotten something mixed up.
After the operation. 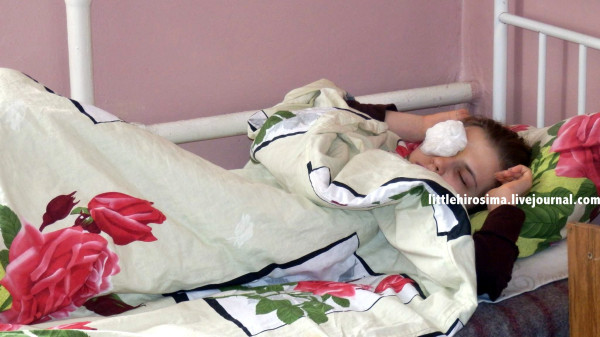 If everything is fine after the laser operation, she’ll have her other eye operated on. Yes, it’s a long and complex procedure. Klapan achmeda which we were looking for may not be needed–it will be used only in an extreme case. I don’t fully understand what it is and why it’s used, but it’s not a wholly harmless drug.
The doctors said that a lot of time has been lost (ideally this operation should have taken place a couple of years ago). Vika’s case is very advanced, and I already wrote about that. She even lost her front teeth.
We’re doing all we can.
We’re constantly buying her food. Good insulin, which is very important. Because poor quality insulin can also make her condition worse. Lenochka, Zhenya’s wife and my friend, travels to the Zozulins and delivers all they need. In addition to drugs from Moscow, everything else that can be found in Lugansk pharmacies is bought on the spot: 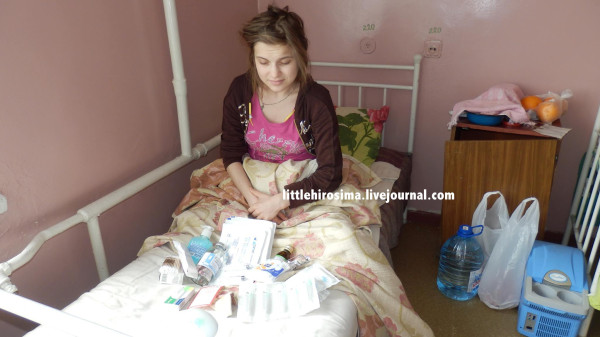 In general, we’re keeping our fingers crossed–I hope you do the same. This was an important operation for her. But everything is still ahead of hear.
The main thing is that the operation gives her hope. And she’s so young and beautiful.
Vika’s eyes cause her a great deal of pain. But that’s not even the worst of it. She practically lost her eyesight in a very short order.
She still hasn’t used to that. She can’t take care of herself, can’t do anything without her mother.
I saw photos of Vika from two years ago–she was an entirely different person then. She was a full-cheeked beauty in bright costumes. She, like all the girls her age, used to take selfies, hang out with girlfriends and enjoy life.
Vika, my sun, hang on! You must fight, otherwise nothing will happen. It’s the only way!
The eight of us will take humanitarian aid to Lugansk at the end of July. If you want to give us something to deliver her, a present, a card, anything at all–please hurry.
And this is Vika from January 2011. Before the war. 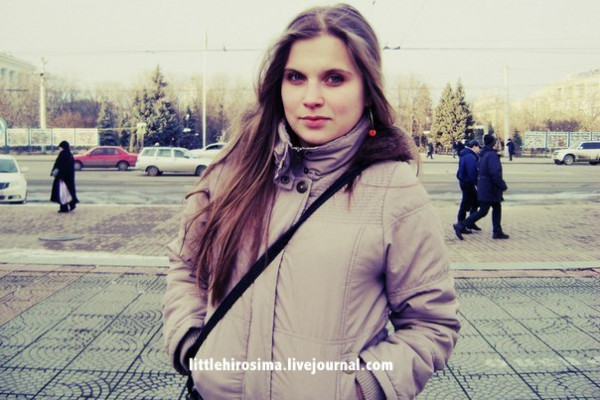 I want to express my gratitude to everyone who transferred money for Vika, who wrote her warm letters and comments.
Many thanks to Zhenya and Lena who have been helping her like family for the last two months, over there in Lugansk.
Also to the Moscow Zhenya, my shadow who constantly runs around Moscow pharmacies with me and takes these drugs to Moscow-Lugansk bus drivers.  To Vitaliy Kotenyov who gave 50 thousand rubles to buy Lutsentis. To Yekaterina Shkenevaya who sent her a package from England and who more than once donated money for the humanitarian mission.
The world survives thanks to people like you. 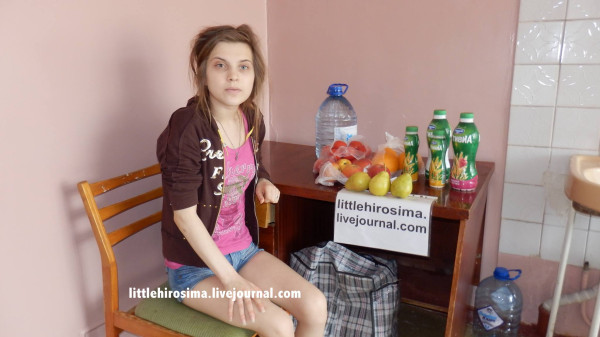 Ukraine’s Ludicrous Attempts to Pass Administrative Reform off as ‘Decentralization’.