The battle of the two Russian flags

Shortly before the holiday, the All-Russian Public Opinion Research Center (VTsIOM) and the Levada Center conducted social studies in the course of which it was revealed how Russians view the state flag.

According to VTsIOM, 67% of Russian citizens are proud of the flag of the country (another 16% are sympathetic to it), 69% are proud of the coat of arms and 72% – of the anthem. Negative emotions in relation to state symbols are experienced by no more than 2% of Russians.

Most of all the Russians remember the coat of arms of the country: 82% of respondents confidently described it by memory. The colors and the order of the bands of the tricolor was accurately described by 64%. Another 24% correctly named the colors, but are confused about their order.

According to VTsIOM, 41% exactly remember the beginning of the anthem (43% – according to the experts at Levada). Forty-seven percent of Russians have a state flag in their home, either a large or a small one. In the past 6 years, the number of flag holders has increased by more than half.

Well then. The number of people who are proud of the flag or are sympathetic towards it (in total, that’s 83% of Russians) is encouraging. But the fact that only two-thirds of the country’s citizens can confidently describe it – not so much. Therefore, I suggest to at least briefly recall the history of our flag and its symbolism.

Perhaps this will surprise many, but the history of the birth of the tricolor is not certainly known – here we have a front for the work of the future generation of historians.

The banners of the ancient Russian state had a  wedge-like shape and had bright colors. The earlier banners showed the Holy Cross. From the 14th century they began to portray the face of the Savior, and from the 16th – the Virgin Mary and Saint George.

I will clarify that the banners were not state flags in the modern sense, but they were military banners.

In 1612 the militia went to liberate Moscow from the Polish ‘euro-integrators’ under the crimson banner of Dmitriy Pozharsky with an image of the Lord Almighty and the Archangel Michael. On the scarlet banner of Tsar Aleksey Mikhailovich Romanov the face of the Savior was depicted.

It is very likely that the emergence of the tricolor can be attributed to the times of the rule of Aleksey Mikhailovich.

The white-blue-red was the flag of the first Russian warship, the “Eagle,” built in 1668. It’s true, unfortunately, we cannot confidently say how the colors were arranged on it – there are different versions (such as the “three-stripes”, and one that suggests the presence of a cross on the flag).

Vexillologist P. Belavinets claims that the tricolors were produced under Aleksey Mikhailovich for
his younger successor, Peter.

We can confidently say that in 1693, during the voyage of Peter I on the White Sea on the 12-cannon sailboat, “Saint Peter,” the flag “of the king of Moscow” was raised – the white-blue-red tricolor with a golden double-headed eagle. The original of this flag is preserved to this day and is located at the Central Naval Museum in St. Petersburg.

In 1694 a 44-cannon frigate, purchased by Russia stood in Amsterdam under the white-blue-red flag.

In 1699, the tricolor is featured in the instructions written by Peter to the Russian ambassador in Istanbul and was mentioned by the Austrian Ambassador in the description of Russian ships.

In 1700, Peter ordered the Armory to “build” the white-blue-purple marine banners. Most likely, they were used by Peter at Narva as a personal land standard.

Since 1705 the tricolor became the flag of merchant ships. In 1709 in the table “Expressions of Maritime Flags” the white-blue-red tricolor was characterized as the “distinct flag of all Russian trading and other vessels.” After that, in the 18-19th centuries the status of the tricolor as the flag of the merchant fleet was repeatedly reaffirmed in various documents.

At the start of the 18th century the Tsar standard appeared – a black eagle on a yellow field.

As for “state” flags, in 1669 upon the order of Aleksey Mikhailovich a white banner with a slanted line, a wide red border, a golden double-headed eagle, and the symbols of subordinated lands was created.

In 1742 (at the coronation of Elizabeth Petrovna) the state banner was presented as a yellow flag with a black double-headed eagle and coats of arms of the various kingdoms, principalities and lands. Subsequently, separate state flags were prepared for the coronations of Aleksandr III and Nikolay II.

Today there is a debate  between supporters of the “classic” tricolor and the black-yellow-white “imperial” flag. The black-yellow-white combination became the “stamp” (not related to the flag as such) under Anna Ivanovna in 1731. It was used on cockades. Banners with such colors were adopted only after 1815.

Legislatively the use of such a combination of flags and banners was fixed only in 1858. The corresponding decree of Alexander II was approved by the Senate. Although there is no direct evidence it is believed that in the years 1858-1883, the black-yellow-white flag can be considered the state flag in Russia.

However, in 1883 (before the coronation of Alexander III) it was already decided in the Imperial Decree “On flags…” that only the white-blue-red tricolor, which was already called the “Russian flag,” was allowed to decorate houses.

For some time, both flags were used in different situations simultaneously, but after the next legislative clarification in 1890, already in 1892 the Kharkov police were demanded to take down the black-yellow-white flag from buildings.

In 1896, a conference on the Russian national flag came to the following conclusion:

The members of the conference stressed that the colors of the tricolor are characteristic of the population of Russia and were widely used in everyday culture for centuries. In the same year, the emperor recognized the blue-white-red flag as the national one “on all occasions”.

In 1899, the tricolor was designated as the national flag in the Maritime charter.

In 1910, the majority of members of the special meeting of the Ministry of Justice proposed nevertheless to install the black-yellow-white flag as the state one and the white, blue and red flag as the mercantile one. However, a commission under the Navy Ministry, which was instructed to deal with this issue by the Council of Ministers, in 1912-1913 rejected the reform of the Ministry of Justice.

The white-blue-red flag existed until 1918, and then was used by the White movement. And since 1918, the flag became a red flag with the inscription of RSFSR. 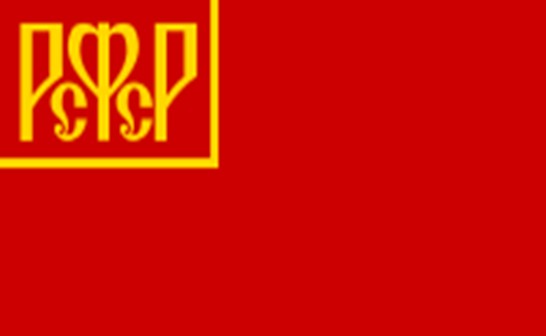 In 1923, the red flag with the hammer, sickle and star became the flag of the USSR. The flag of RSFSR with some minor changes (text font) existed until 1954, when it was replaced by a red flag with a sickle, hammer, star and a light blue stripe.

In this period, pre-revolutionary Russian symbolism became widely used by all sorts of anti-Soviet structures, organizations and movements.

The black-yellow-white flag was “in vogue” at the Russian Fascist Party of Rodzaevsky and in the Western Volunteer Army. Variations of the white-blue-red tricolor as well as St. Andrew’s flag were used by the Russian Liberation Army, the Committee for the Liberation of the Peoples of Russia, and the “Russland” division.

By the way, regarding the point which generates a sea of speculation, the famous St. George’s ribbon, which the Ukrainian Nazis and Russian liberals are trying to pass off as a symbol of collaborators, was practically not used by Hitler’s divisions! On the other hand, it was transformed into a Guards band, and widely used by the Red Army! The only large-scale connection between  St. George ribbon and the Committee for the Liberation of the Peoples of Russia, as well as some other “nationalist” units, (not the earlier ROA) is that their members were still the Tsarist military, rewarded with the “Georges” in the First World War and with several other awards attached to the St. George ribbon for the Civil war. But, excuse me, there were no fewer Knights of the St. George in the Red army …

At the end of the 1980’s, the Russian tricolor became widely used by various Russian national-patriotic and democratic movements. In 1991, it could often be seen at mass rallies.

As was already written above, those of the Russian right, under the support of a number of influential politicians, are calling to replace the current flag with the black-yellow-white one. I personally do not see any logical arguments in favor of such a decision.  After all, the black-yellow-white flag over a centuries-long history only held a state or, shall we say, official status for only 25 years. Its heraldic justification, connected with cockades from various periods of the Russian empire, today have lost their relevance, acquiring a purely historical character.

In terms of the justification of the white-blue-red tricolor, everything is much more interesting.

Firstly, according to the pan-Slavic congress in Prague in 1848, the colors of the Russian tricolor became the official colors of the pan-Slavic and Slavic liberation movement. Based on these considerations, Slovakia, Slovenia, Croatia, Serbia, Bulgaria (with a minimum correction of blue to green), Rusyns and Sorbs [Lusatian Serbs] chose the flags for themselves. If, excuse me, in gratitude to our country and our people a number of countries chose for themselves a similar flag, maybe it is a serious cause for pride? Moreover, the ideas of Slavic liberation today are also very relevant…

Secondly, it is believed that the colors of our tricolor symbolize the unity of Great (red) [Russia], Little (blue) [Ukraine], and White (white) [Belorus] Rus.

Thirdly, there is a simple poetic meaning, that the white means nobility, the blue – faith and honor, and the red – courage and love.

The red flag is still worth mentioning. The Soviet era is associated with outstanding achievements of our people: the salvation of the world from the Nazis and victory in the Great War, the first manned flight into space, and a stunning development of science. And despite all the vicissitudes of the Civil War, the history before the Revolution of 1917 and after it – it is a single history of a single people! And the work to “reconcile” it on a symbolic level began even in the 1940s. A lot is being done for that today. The use of the historical coat of arms along with an anthem set to the music of the Soviet anthem is a step in this direction.

How can the flags be “reconciled?” This is being done – and quite successfully. Along with the State flag, the Red flag of victory is also used on Victory Day – a copy on the one hoisted on the Reichstag. On May 9, 2015 the Victory Banner was carried in front of the State flag, which is very symbolic. It would be fair to expand the use of the Victory Banner. The proximity of the tricolor and the red banner is a beautiful symbol of the unity of our great history.

Happy State Flag Day, dear readers! Let this day bring you the most beauty which is embodied by our tricolor!

The Gangs of Zaporozhye

“Russian soldier” forced to lie on camera by SBU