Nikolai Alekseevich Kasatkin — Russian painter-realist who was the first among the prominent artists who turned their creative attention to Donbass. It happened after the first visit to our region in 1894. Later Kasatkin visited Donetsk steppes many times, talked to people, got acquainted with the work of the miners and metallurgists. In 1936 the journal “Literary Donbass” published the article of  V. Zolotarev about Kasatkin, in which the author talks about the proletarian side of the artist. Let us together find out a little more about Nikolai Kasatkin and about his paintings devoted to Donbass.

On December 17, 1930 one of the last representatives of “peredvizhnichestvo” [artists-wanderers who travelled through villages to show their work to the people – tr.] artist N. A. Kasatkin has left us. Kasatkin’s achievement was that he was one of the first to show the full height, in the conditions of developing capitalism, of the worker in tsarist Russia and especially in Donbass. Kasatkin was the first to artistically and truthfully paint a worker, his life, his work. None of the artists before Kasatkin have expressed a direct interest in the proletariat. For the “wanderers”, closely associated with narod [the simple people], the center of attention was the peasantry… It was their central historical figure, the arbiter of historical destinies of Russia.

The “wanderer” Kasatkin, whose artistic activity started in the 80-ies following his teacher — the inspirer of “peredvizhnichestvo,” Perov, too early in his creative work gives tribute to peasant interests (“Rivals”, “Resale”, etc.). But at the same time in the works of Kasatkin in the 90-ies there is a new theme. Increasingly his canvases feature the working class. What prompted Kasatkin to this? Is the new starting point in his work an accident? To trace many years of artistic and creative activity of Kasatkin means to link his work with the events of the 90-ies, when Kasatkin developed and strengthened as an artist. Frequent trips of the artist to Donbass in these years are crucial to his later creative work. 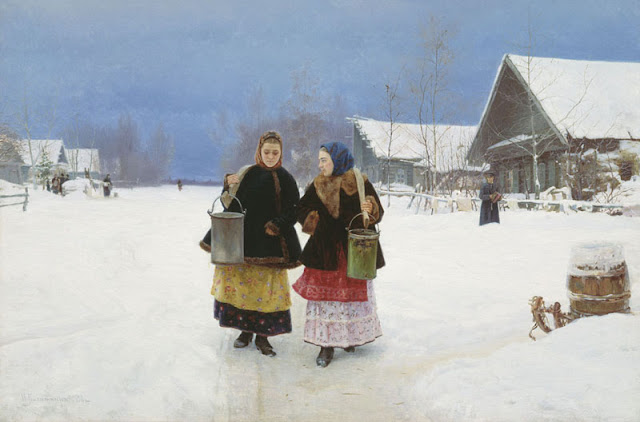 In Donbass Kasatkin saw the hard labor of the miners, saw them ruthlessly exploited by capitalists (Yuzy, Averbach’s, Karpov’s, Pastuhov’s, etc.). Donbass, enslaved by capitalism, made then a strong impression on Kasatkin: the themes of miners ‘ life and work stayed with him until the end of his creative work. Having selected a mining theme, Kasatkin until his death remained faithful to it. He established a close organic connection with Donbass. Throughout the 1890-ies the artist almost every year visits for sketching, to gather material for new paintings. Kasatkin showed great interest in the poor conditions of the miners, their slave labor; the lives of the miners becomes close to him. Of great importance here is the fact that the artist himself went through a time of hard labor.

Born in a family of master lithographer, Kasatkin experienced adversity in his childhood. All this and more contributed to Kasatkin sympathising with the proletariat. If now the working theme, the creative journey of artists of Moscow, Kiev, Kharkov to the working areas is a common phenomenon, Kasatkin’s trips in those years to Donbass should be considered as a phenomenon of undoubtedly revolutionary value. In Donbass Kasatkin had to work in the most adverse conditions: endure different hardships and failures.

Mine owners suspiciously watched, when on the territory of their mines appeared some “outsider” with a sketchbook over his shoulder; made countless sketches from the dirty, covered with coal dust miners, started conversations with them. All of this troubled them: “What if something comes out of this… God forbid”. And they were not particularly willing to let him into their territory. In nearly all his letters to relatives Kasatkin complains, what harsh conditions he has to work in Donbass. Here he writes from his last visit in 1899 (mine “Sofia”, station Khartsyzsk): “At the mine it is so hard that I could not stay to work. In Yuzovka we were arrested (there is a labor movement and a strike!..). All locked up and the plant is idle”… But the difficulties, setbacks do not stop Kasatkin and soon the results of his hard work begin to show.

Frequent visits of the artist into the midst of miners’ life, persistent creative work ensure the success of his art. Familiarity with Donbass contributes to the paintings of Kasatkin being genuine, reaching the viewer, speak to him and drawing attention to the artist’s work, especially because the images of workers was a new theme, and was perceived in a new way.

However, ten years before the famous painter of “the wanderers,” Repin, produced his stirring “Barge Haulers on the Volga” (1893). But they do not yet represent the working class.

In 1894 Kasatkin gives his best capital picture of “The Miners”, which made then, perhaps, no less of a splash than the “Haulers” of Repin. Kasatkin for the first time in art created a worker in all of his height, which was overlooked by the other “wanderers”.

The painting “The Miners” depicts the moment of the mine shift change: one half, tired and weary from the exhausting labor underground, with lit lamps comes out of the lift; at the granary a new shift of workers is waiting, with equipment in their hands. Dark colors, prevalent in the painting, strengthen its emotional expressiveness. With extraordinary truthfulness Kasatkin managed to show the slave labour conditions of these harsh looking, exhausted miners.

“The Miners” propelled Kasatkin to the special place that he holds until his death. A miner on the painting “Lame Luke” is already physically crippled by ruthless capitalist exploitation, with curved, shaking knees, with the oil lamp. He is ready to continue his work in the mine, where with every step injury awaits him, and perhaps even death because of the criminal attitude of the owner of the mine to the working conditions of the miner.

Another painting — “The Puller” (Luger), where the artist depicts a teenager, crawling in the shaft, pulling attached to the hook of his belt heavy sleds loaded with coal. The picture gives a good idea of the work of the lugers. Luger, who in the conditions of Soviet reality disappeared from the scene, in the old Donbass was one of the central figures of coal production. Spending from twelve to fifteen hours underground, luger dragged the sled on all fours, loaded to capacity with coal.

Only “The Mine Girl” stands out from some of these same type of gloomy paintings. In the “The Mine Girl” Kasatkin gives the appearance of a healthy smiling girl, apparently, recently arriving to work from a village. Need, adversity had not yet put a stamp on her.

These paintings have made an enormous contribution to Russian art and gave Kasatkin wide popularity among the workers. The bourgeoisie, on the contrary, was cold and reserved towards each new painting of Kasatkin, especially where he depicted the proletariat. For example, a famous owner of an art gallery in Moscow, capitalist Tsvetkov, after examining the best picture of Kasatkin “The Miners”, was not impressed and advised the artist to paint more sun, to give more joyful colors and less black coal and some “sweepers”.

The bourgeois press strongly suppressed, ignored the art of Kasatkin. It willingly encouraged and supported those artists “wanderers” who had lost all the revolutionary elements, smoothed social contradictions in their work and tried to make their paintings acceptable, pleasing the bourgeois consumer. But Kasatkin was little bothered by this assessment, this attitude. He never retreated from his ideas, which were associated with the epic of work. For this, he continued his trips to the mines of Donbass, where he tirelessly gathered material intended for new works.

To better understand and appreciate the art of Kasatkin, one needs to get more familiar with some biographical data of his life.

Kasatkin, born in 1859 went through a difficult life. Passionate from childhood about drawing, Kasatkin entered the Moscow school of painting at 14 years old. Upon graduation in 1878 he wants to enter the Academy of Arts. But it remained a dream. Fame did not come immediately. No one bought his paintings. Only in 1888, finally, the capitalist Tretyakov, the owner of the gallery, bought the painting “Rivals”. In the same year Kasatkin becomes a permanent member of the Association of traveling exhibitions.

The revolutionary uprising of 1905 is clearly reflected in his work. He produces a number of paintings in tune with time (“After the Search”, “The Last Path of a Spy”). The reaction, which followed after 1905 stopped the creativity of the artist. Kasatkin is temporarily silent.

The October revolution triggers a new rise of the creative spirit of Kasatkin. His intensive work after the October revolution is even more organically linked with the working class. Among his favourite subjects, the artist uses a new type of youth—members of the “Komsomol,” the “pioneers”; he creates a whole series of paintings, e.g. “Our Komsomol Youth.” This is one of his best works of the post-revolutionary period.

In 1924 Kasatkin again returns to his favorite miner theme. This time he travels to England and brings out a whole series of sketches from life and struggle of the English miners. Kasatkin, one of the first artists (in 1922), deservedly received the title of People’s Artist of the Republic. Staying true to the precepts of artistic realism, the artist-activist Kasatkin throughout his fifty year career, until his death gave all his strength to the proletariat.

The Old Donbass with its backbreaking work is left far in the past. In its place rose a new socialist Donbass. New cities, mines and factories are created. More mineral wealth of Donbass is discovered. A new, proletarian culture is thriving. New people are growing up.

The October revolution has unleashed all the creative possibilities of the proletariat. If before the October revolution, we knew only one artist who displayed the Donbass region – Kasatkin, after October we see something completely different. On the one hand, in Soviet conditions Donbass produces new young talent: Golovaty, Kravtsov, Gruskin, Mishchenko, Bendrick, Kozodoev and others and, on the other hand, here come the artists of Moscow, Leningrad, Kiev, Kharkov.

If Kasatkin’s trips to Donbass were in the old days an extraordinary phenomenon, the trips of Soviet artists to the industrial areas of our country and in particular to Donbass do not cause any more surprise. This is one of the battles, regular work, facing the Soviet artist. We must mention the Moscow artists: Zhuravlev V., Petrov I., who, with the example of Kasatkin, periodically visit Donbass, and learn about the new, changing environment, new people of Donbass. Of the artists of Ukraine we may note Azovsky, Kozik, Cherkassky, etc.

The indicator of the overall rise of the socialist culture of Donbass must become the upcoming exhibition “Donbass in painting.” Socialist Donbass must find its creative display in the paintings of the best artists of the USSR, the participants of this exhibition.

In connection with the preparation of the exhibition “Donbass in painting” we can’t pass by the artist Kasatkin. The artist’s heritage needs special attention. It is necessary that the workers of Donbass get more acquainted with the works of Kasatkin, where so vividly, truthfully, with artistic persuasion the irrevocably gone to the distant past – the old Donbass, with his inhuman exploitation, rough manners, politically powerless of workers is displayed. The exhibition must widely represent the works of the first singer of the proletariat of the old Donbass – the People’s Artist of the Republic — N. A. Kasatkin.

Littlehirosima: The Horror of War

Why did the U.S Abandon Development of the ‘Mother of all Atomic Weapons’…