Ukrainization of Yuzovka/Stalino in the 1920-ies

Long-known truth: everything in history repeats itself. Donetsk once was subject to ukrainization. By the Bolsheviks. Then it did not work – Kremlin’s policy has changed. Here is a short historical overview about the ukrainization process in the distant, as a classic says, “now almost mythical” 1920-ies. This review is in no way intended to be complete, because it is based mostly on press reports, the archives are not yet available. But there are many interesting points.

The Bolsheviks viewed Donbass as a very special place. Lenin called Donbass the region, without which socialist building would have remained a simple wish. Donbass was as essential to the socialist economy as air: coal and metal at any cost. But the exploitation of natural resources without human resources is unthinkable. People came in droves to the region, some for work, some for romance, and others just for company. Two-thirds of the industrial population of Donbass were immigrants from Central Russia. Their native language was Russian or Tatar.

A decision was made about ukrainization of government agencies and industrial enterprises. It was planned to conclude this is important matter by January 1, 1926. But there was not much zeal for the cause of national policy by the Ukrainian leadership: the issue of ukrainization played a role in the change of the ruling Ukrainian elite. Secretary of the CP(b)U C. Kviring was replaced by L. Kaganovich. It happened in April 1925. And immediately the process of ukrainization began to speed up.

The Commissariat of Education also underwent the change of leadership. Alexander Shumsky was appointed as the head, who did not speak Ukrainian. But Shumsky had a tainted political biography, in his youth he was in the party of Ukrainian social revolutionaries, and so began to fanatically pursue the policy of ukrainization. Workers to janitors were subject to ukranization. Those not wanting to ukrainize and failing the exam in the Ukrainian language were fired without the right to receive unemployment benefits.[1]

Local Stalino (former Donetsk) press in the fall of 1925 reported about Ukrainian language courses for civil servants and technical managers opening in the city. Only a fraction of enterprises could be covered by the courses, but from October 1st the city opened more courses. For in-depth ukrainization of operations, classes of Ukrainian studies were created.[2] On September 15 there was a meeting of lecturers on ukrainization of the state enterprises. [3]

Commission of Gorispolkom [District Executive Committee – Stalino district authorities – tr.] on Ukrainization under the chairmanship of comrade Gorlanov on January 28, 1926 held a meeting on the subject of inspection of enterprises which held Ukrainization courses. Apparently, there were not many such enterprises, since the inspection began on January 29 and ended on February 1.[4] 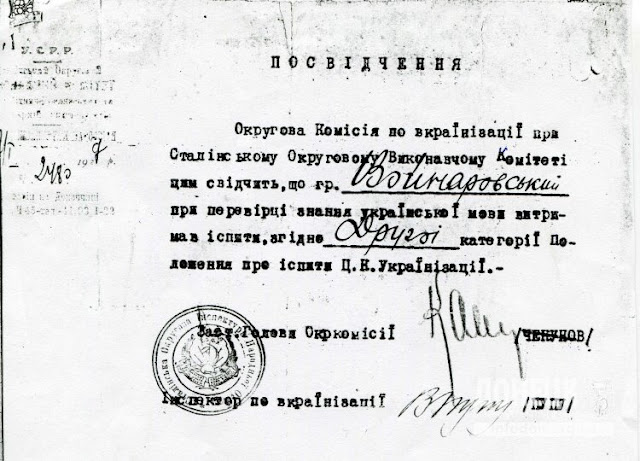 In early 1926, several large industrial enterprises reported in the press that they will introduce new seals with text in Russian and Ukrainian languages. Perhaps it seemed to be most important in ideological terms. [5] Stalino Insurance informed that from July 15 it will introduce the pay-sheet in the Ukrainian language and all the old forms are discarded. All of this was seen as a new stage in the policy of universal ukrainization.

At the XIV Congress of the CP(b)U (April 1926) comrade Kaganovich raised the issue of ukrainization, “I want to touch on one more issue, namely ukrainization. This year we have made a significant step forward in this area, but it’s not enough. We have ukrainized externally, but we need to go deeper, to embrace the ideological front of ukrainization. We must raise new cadres and continue the work of ukrainization, for it is a mighty factor in the management of the masses. It must be formulated as follows: fewer conversations, more specific considerations, more real results”. [6]

This author got a collection of  Stalin’s articles (1939 edition.) on the national question. It contains a letter to comrade Kaganovich and other members of the Central Committee of the CP(b)U. This document was written a few weeks after the XIV Congress of the CP(b)U, that is, in 1926. You can not call this letter anything other than instruction to action.

In the address the chief criticizes comrade Khvylov and Shumsky, who “confuses the ukrainization of our party and Soviet apparatus with the ukrainization of the proletariat. You can and should ukrainize, respecting a known pace, our party, state and other apparatus serving the population. But you can’t ukrainize the proletariat from above. You can’t force the Russian working masses to abandon the Russian language and Russian culture and recognize Ukrainian as  their culture and their language. This is contrary to the principle of free development of nationalities. This would not be national freedom, but a form of national oppression. There is no doubt that the composition of Ukrainian proletariat will change with the industrial development of Ukraine, with the inflow of Ukrainian workers from surrounding villages into industry. But this process is lengthy, spontaneous, natural. To try to replace this natural process by forced ukrainization of the proletariat from above means to carry out utopian and harmful policy, capable to produce anti-Ukrainian chauvinism in the non-Ukrainian strata of the proletariat.

Secondly, rightly stressing the positive nature of the new movement in Ukraine for Ukrainian culture and civil society, comrade Shumsky does not see, however, the shadow sides of this movement, that under a weakness of the indigenous Communist cadres in Ukraine this movement is often led by the non-Communist intellectuals, can sometimes take on the nature of struggle for the alienation of Ukrainian culture and Ukrainian civil society from the common Soviet culture, take on a nature of the struggle against “Moscow”, against the Russians in general, against Russian culture and its greatest achievement – against Leninism”.[7]

The Leader above all feared the weakening of Moscow’s influence. It turned out that the Russian workers don’t necessarily have to know the Ukrainian language, but Ukrainian nomenclature was obliged to know, but to know in order to correctly carry out the ideologically-proletarian work with the Ukrainian masses.

And when the secretary of the CC CP(b)U Chubar came from the capital to the June Plenum of Stalino’s regional committee of CP(b)U, he was already familiar with the opinion of “leader of the peoples”. In his speech Vlas Yakovlevich talked about ukrainization in general and about the incorrect views about it, in particular: “There were party members who had underestimated the capabilities of the national question, who did not recognize the Ukrainian language, who thought that all this is a trifle in the business of socialist building. In 1917 the representatives of the Ukrainian culture and the Ukrainian language were Petlyura and Tyutyunnik with their gangs. All this had a counter-revolutionary nature. Some comrades said, “Why do you want me to marry with this culture, when it is counter-revolutionary?”. But when the Bolshevik government is constructing its Soviet culture using all the national forces, every worker can without regard build culture with his proletarian hands, under the influence of the proletariat.

In the Stalino district three and five month elementary courses of ukrainization were established. There were also advanced courses (of ukrainoznavstva [Ukrainian studies]). They were intended for workers who completed the course of ukrainization and received the 1st and 2nd categories. Classes in Ukrainian language were held every day for 2 hours after work. Those lagging behind were obliged to pay the tuition out of pocket.

False Flag: The “Snipers’ Massacre” on the Maidan in Ukraine