The constitutional reform being conducted in Ukraine is not in the slightest in line with the Minsk Agreements, the head of the self-proclaimed Donetsk People’s Republic (DPR), Alexander Zakharchenko, said Wednesday.

“As of today, no point of the Minsk Agreements has been fully implemented by Kiev: military hardware has not been withdrawn from the disengagement line, moreover, its number has been increased, the law on amnesty has not been adopted by the Verkhovna Rada,” Zakharchenko said.

“As regards the constitutional reform in the sphere of decentralization – it can’t be called other than a farce. That law, which already led to the death of people in front of the Verkhovna Rada, not only is out of line with the Minsk Agreements, but directly contradicts them,” the Donetsk News Agency quoted the DPR leader as saying. Zakharchenko stressed once again that in line with “Minsk-2”, Kiev should agree with Donbass about the changes to the country’s constitution. “But Kiev has made no steps forward despite openly provocative statements,” he said.

The DPR leader said that the latest statements by Ukrainian President Pyotr Poroshenko at a meeting with Ambassador Martin Sajdik, the Special Representative of the OSCE Chairperson-in-Office in Ukraine and in the Trilateral Contact Group on the implementation of the peace plan in the east of Ukraine, “unambiguously show once again that Kiev has not listened, is not listening and, it seems, is not going to listen to the voice of Donbass”.

The Ukrainian presidential press service reported earlier Wednesday that Poroshenko held talks with Sajdik at which he pointed to “full implementation by the Ukrainian side of its political commitments on the Minsk Agreements of February 12, 2015”.

This week, the Verkhovna Rada approved amendments to the Ukrainian Constitution regarding decentralization in the first reading.

The DPR and the Lugansk People’s Republic (LPR) say the amendments do not comply with requirements of the February 12 Package of Measures on implementation of the Minsk Agreements, as the document points to the necessity to coordinate with representatives of the Donetsk and Lugansk regions the constitutional reform regarding decentralization. 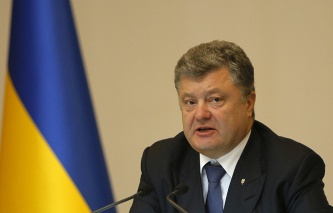 The DPR and LPR also insist on transferring the mention of Donbass’s special status from transitional provisions of the Constitution to its main text.

After a coup occurred in Ukraine in February 2014, mass protests soon erupted in Ukraine’s southeast, where local residents, mostly Russian speakers, did not recognize the coup-imposed authorities, formed militias and started fighting for their rights.

In response, Kiev in April 2014 announced the start of “an antiterrorism operation” in east Ukraine, which involved the Armed Forces, the Interior Ministry’s National Guard and volunteer battalions made up of Euromaidan activists, many of whom hold far-right and neo-Nazi views.

Massive shelling of residential neighborhoods, including with the use of aviation, has killed thousands and led to a humanitarian disaster in the area.

Kiev has regularly violated the ceasefire regime imposed as part of the Package of Measures on implementation of the September 2014 Minsk Agreements.

The Package (Minsk-2) was signed on February 12, 2015 in the Belarusian capital Minsk by participants of the Contact Group on settlement in Donbass.

The Package, earlier agreed with the leaders of the Normandy Four (Russia, Germany, France and Ukraine) envisioned an overwhelming cessation of fire and withdrawal of heavy armaments to create a security area in the region at least 50 kilometers wide.

The constitutional reform and decentralization of power in Ukraine were also among the document’s key provisions, just as establishment of working subgroups.

EU: Question for a Court Jester