Littlehirosima: In Debaltsevo with Humanitarian Aid

Original by Yevdokia “Dunya” Sheremetyeva published on the littlehirosima blog; translated from Russian by J.Hawk and originally published on South Front. October 21st, 2015

Do you know how we distribute aid, look for the needy [on the ground], in Donbass?

I regularly get requests like: “The Ivanov family is
starving! SOS!”. So we go to the Ivanovs. We are met by a well-fed lady
who rudely commands us to “put it all right there [and leave].” Doesn’t want to let us come in.
But when we do manage to get in, we see a refrigerator stuffed with
sausages, fat kids with candy-loaded mouths, who give you printed-out
drawings of tanks and exploding bombs.

For some reason, internet requests
often turn out this way. It doesn’t mean the Ivanovs don’t need help.
They probably aren’t doing all that well, if they are asking for help.

But we turn around and walk away. Toward those who won’t ask for help.
And those who have nobody to help them.

Therefore I don’t react to the
majority of tearful internet requests. Yes, it sounds cruel. But one
can’t help the whole world.

How do we find those whom we help?
That’s an art form in and of itself.

–Zhenya, let’s drop by Debaltsevo after the Gorlovka hospice? There are many destroyed houses and people who have nowhere to go.
–Let’s go.

Then we assemble food packages. Each weights 12kg – milk, pasta, chicken, butter, soap, etc.
And we head out into nowhere. 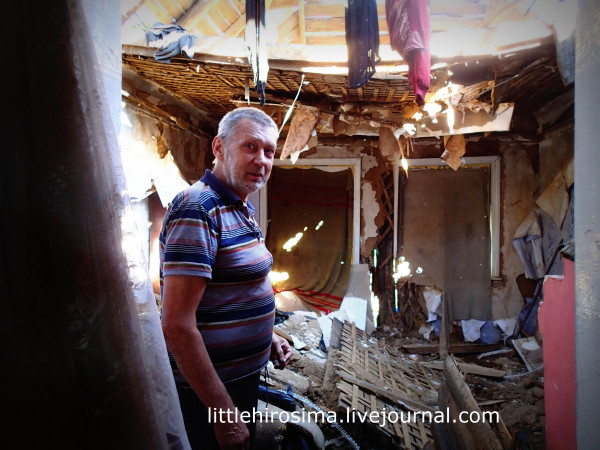 We usually look for the village council or village/city administration, ask people on the street for directions.
Then we go inside and ask for someone who could give us a list of people
who need help. They are always forthcoming. No matter where we go.
Georgievka, Khryashchevatoye, Debaltsevo, Chernukhino…Yes, our charm
moves mountains)
Social workers often get into our bus and drive house to house. They
often hide their faces: “Later they’ll tell everyone we’re doing this for PR off
humanitarian aid. We don’t need that.”

So after the Gorlovka hospice we drove into Debaltsevo on our way back.

Debaltsevo Administration. Almost not a single unbroken window in the entire building. 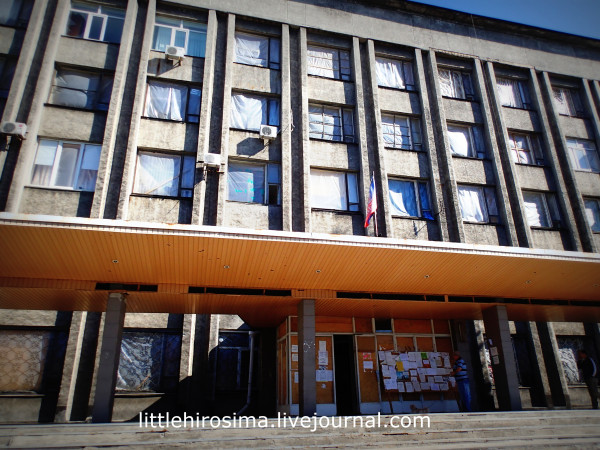 Natalya Nikolayevna Serenko, the mayor’s right hand, is the one who went
with us to show us around the streets–we know almost nothing about the
city.

We try to make phone calls. Some people are not at home, in other cases we get a busy signal. We go on blindly.
So we find ourselves at the home of Svetlana Valer’evna Strateilatova.
The garden is teeming with poultry–ducks, chickens. One can’t survive without a garden.
A mortar hit the garden on January 29th. The house stood, but the roof was badly damaged. 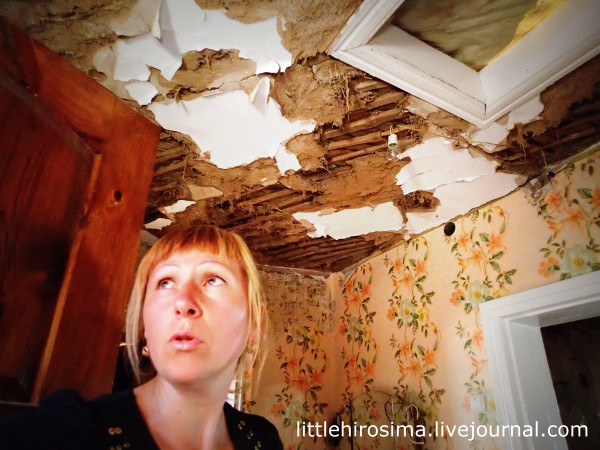 Svetlana lives with her son. Doesn’t complain about anything.
But entire roof is in that condition. They live
under it anyway. Even though they can see the sky through the holes.

–What if it rains?
She laughs.
–We cover everything with plastic bags and tape. But that’s half the
trouble. Once the winter comes, you can try to heat all you want, but… 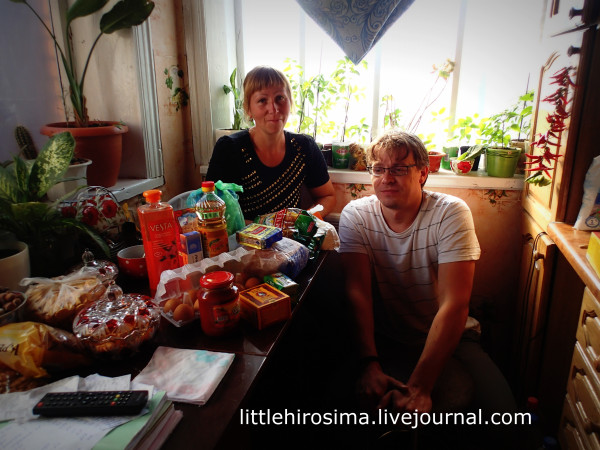 While we were visiting Svetlana, our driver Sergey got talking with a
passer-by on the street. It turned out his house was hit by four shells
and his whole family lives in a shack across the street.

We go to visit them – out in the yard there is a baby carriage with baby in it, and a dog on a leash. Life goes on.
Except Valeriy Pavlovich Panamorenko no longer has a house. 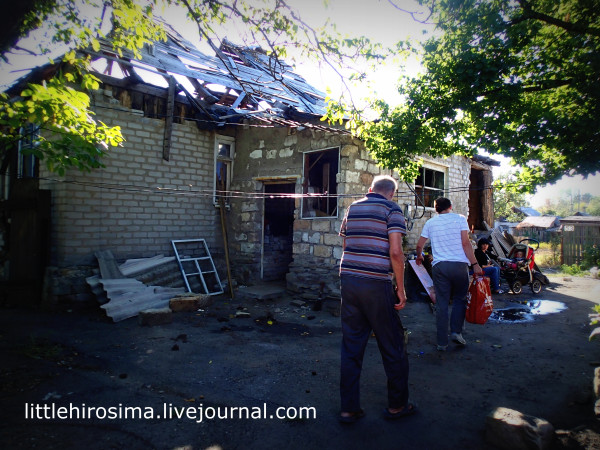 –Dad, show them the house from the inside.
The daughter has plump cheeks. She was beginning to laugh and giggle all the time, like a child.
And yet she became a mother herself, not so long ago.

–We did a total facelift for our house last year. Can you see? We only just installed new switches…

I can’t see. No switches. Only some pieces on the floor… 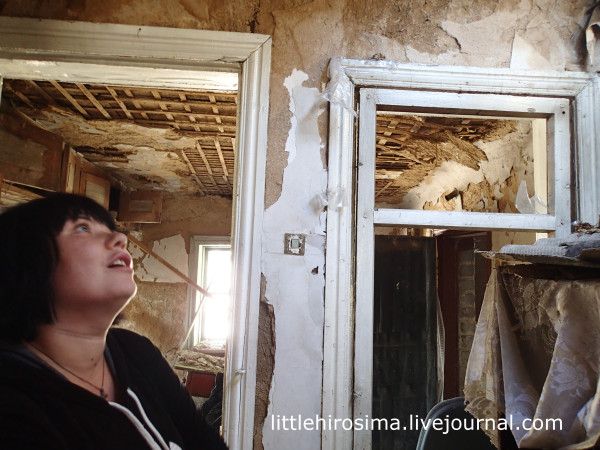 People who genuinely need help will always let you into their home.
They’ll tell you everything about themselves, so that you feel awkward
when trying to leave. No reporter or a journalist will get as much
information as a volunteer.
I’m holding a recorder and a notepad. I’m constantly listening and taking notes. 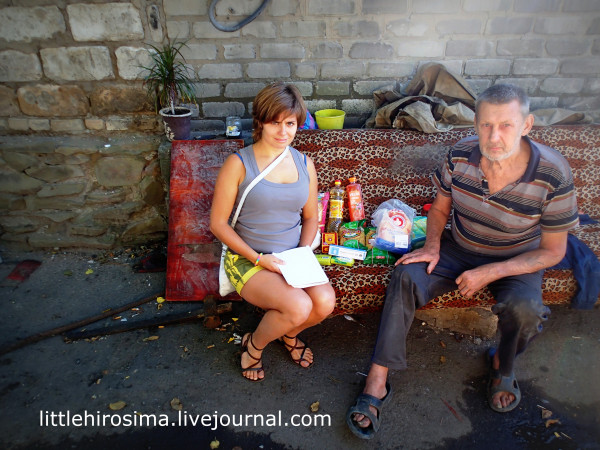 A woman approached us by the door.
–My house was also destroyed. 5 shells.

We followed her. I sideways glance at her – she walks self-assuredly, but at the same time wipes tears with her hand.

–Here, come visit.
The voice is as self-assured as the stride.

On the photograph she’s standing right by the stove–the heart of the house.
But Lyubov Aleksandrovna Korneyenko no longer has  a house.
In the place of her house there is grass and nettles.
Nature quickly forgets people. 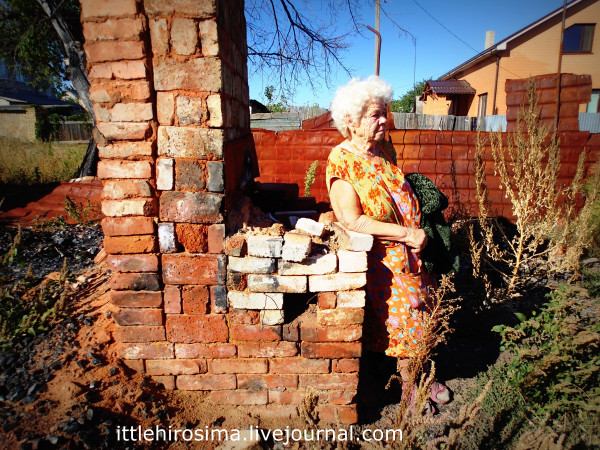 –I’m living with my daughter, next house over. I hid in her cellar when the shells came…
The daughter has a Category 2 disability. Two heart operations. The daughter is 53 years old and has no children.
–Everything burned down–dog, chickens, two cats…

With her “home” in the background 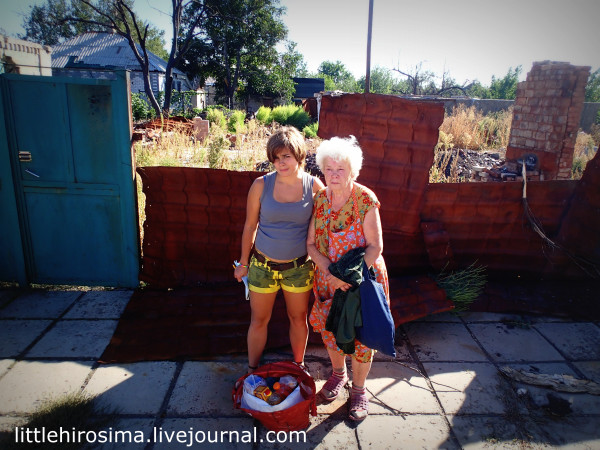 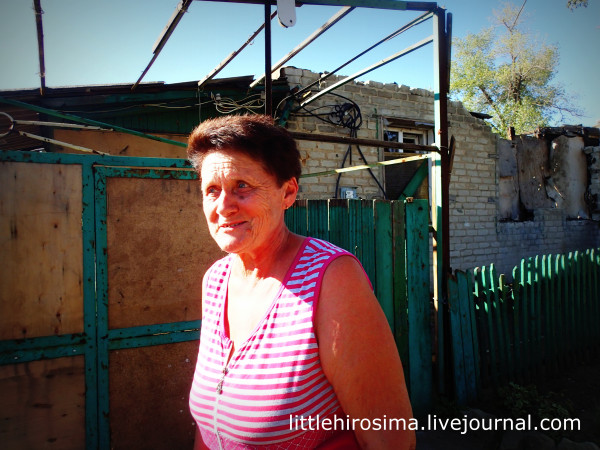 She lives with another elderly woman.
–The house took seven hits at various times.
Yet people say that a shell never hits the same place twice…How many times did we encounter exceptions such as this one… 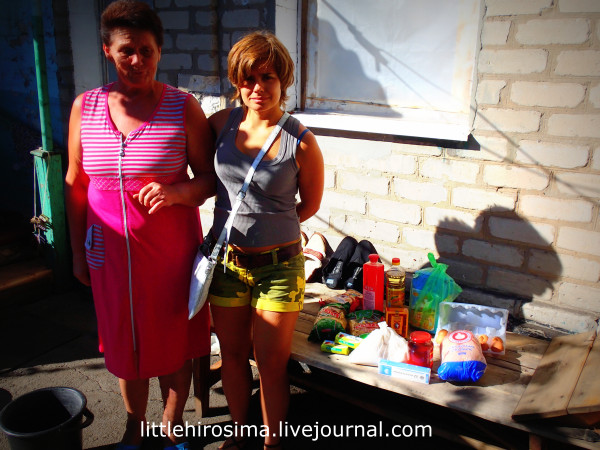 And this is Olga Grigoryevna Kruglyak.
She is suffering from a whole range of illnesses, starting with a severe
case of diabetes and ending with chronic bronchitis, pyelonephritis,
and others. I couldn’t even write them all down.
–You name it, I have it.
She lives alone. Her house took some damage, but is largely intact and habitable. 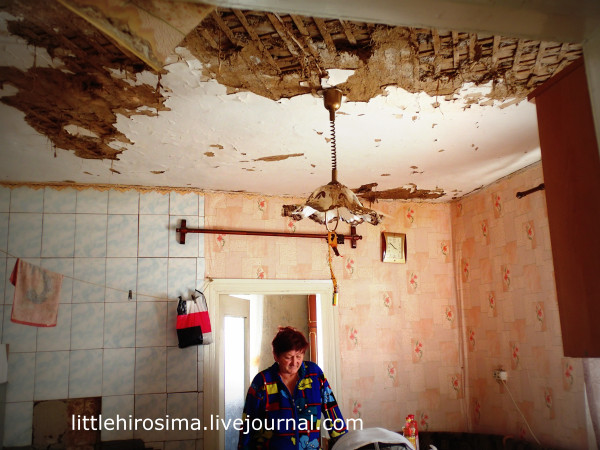 While we were unloading aid, a man walked up.
–That’s my son, came by for a day. Son, could you help carry the food?
–What, can’t you do it yourself?
The healthy, young guy turned around and left.
Olga Grigoryevna was incredibly embarrassed.
And we were incredibly embarrassed for him…
A tiny, ill woman who can barely walk around the yard… 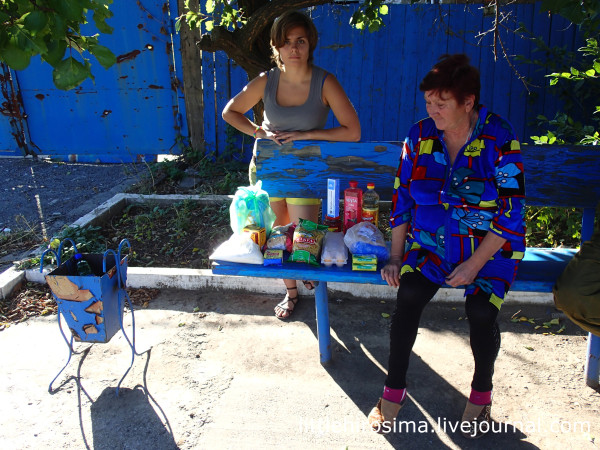 Two grandkids are running around Valentina Nikolayevna Gurik’s yard, a
boy and a girl. They live with her grandmother and great grandmother
(holding the cane in the photo below) on Polevaya Street. Which saw the
heaviest fighting in Debaltsevo. 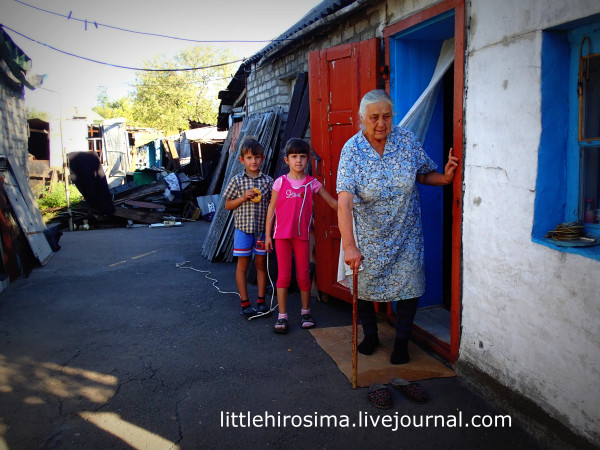 Their house didn’t suffer too badly. Although the bathroom was totally
destroyed and all the sheds were turned into splinters. But they have a
roof over their heads.

Valentina Nikolayevna is smiling, she’s smiling all the time.

–My mom was feeling ill. She lay on the bed. I sat in the hallway with a pillow over my head. 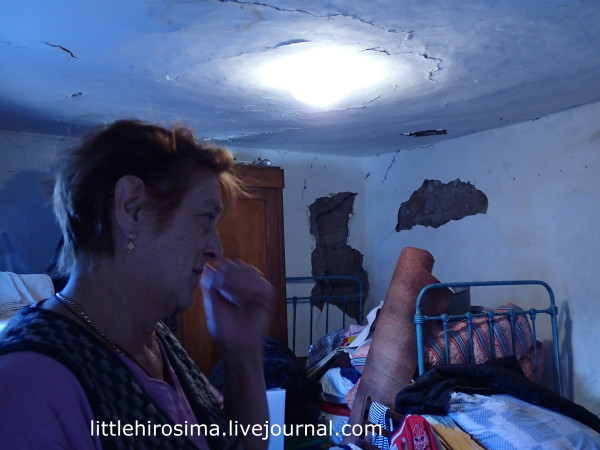 –Stay a bit longer, I’ll give you something to eat!
–Thanks, but it’s time for us to go on.
–I understand. You see how things are here. But it’s OK, we fixed the roof…

After 15 more minutes it turned out she has melanoma. Skin cancer. She
already had two chemotherapies. She needed a third one but didn’t have
the money.

–We had to fix the roof. Gotta survive the winter somehow after all that’s happened…

And yet she is inviting us for a meal. She didn’t let us leave empty-handed–she poured us a bottle of well water…
The roof or the third chemotherapy… 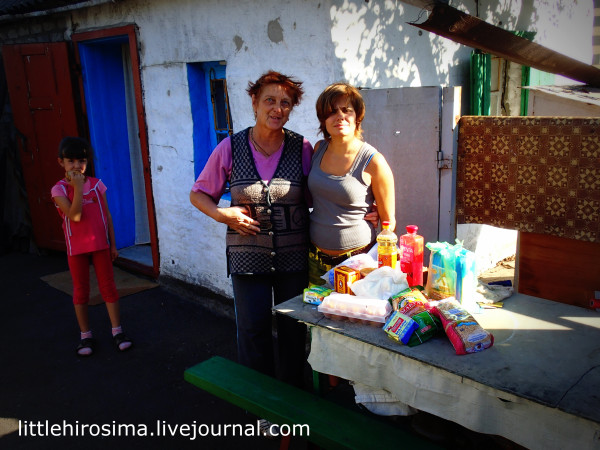 And so it goes the whole day, until we deliver all the aid.
House to house. From one shattered human life to another.
Debaltsevo itself was all green and overgrown. It is 137 years old, which is quite a bit of time. And it just became well-known worldwide.
That tiny town, a dot on a map. 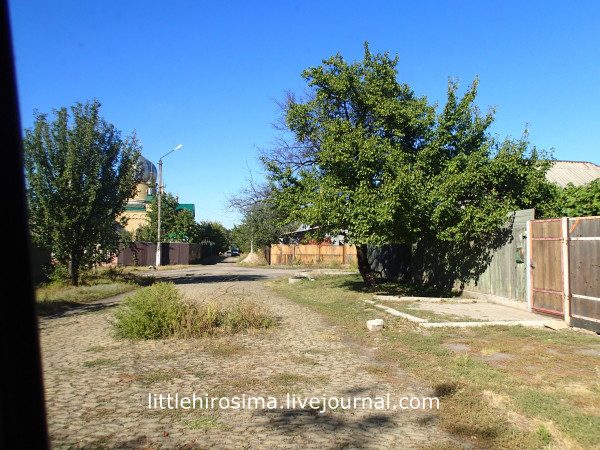 If you want contribute to humanitarian assistance to the people of the Donbass, contact me in person through my livejournal account, through Facebook, PayPal ([email protected]), or via email: [email protected]