Original written by Yevdokia “Dunya” Sheremetyeva and published on her littlehirosima blog; translated from Russian by J.Hawk and originally posted at South Front. October 1st, 2015

This is Pervomaysk’s current reality.
There is no water. Bottles, pots, bathtubs–every available container is filled.
The UAF cut the city’s water supply in May.
Can’t wash, can’t cook food, can’t wash children or bedridden elderly.
It’s a catastrophe for the city. The city right now has two recently dug wells.
People are manually filling bottles and take them home.
But the problem is that, in order for the city to provide water through
its mains at least twice a week, the water tower would have to be
supplied by at least four wells, and would need two additional pumps.
Which means that two more wells have to be dug.
Ideally as quickly as possible, before the cold sets in. In the meantime water trucks are delivering water to all parts of the
city on designated days, with people filling up their containers.
One has to keep in mind this procedure burns a lot of gasoline. And
people have to carry their bottles back to the apartments on foot. The
majority have no cars.
And what about the elderly, the single mothers?
Some of them carry over 30 liters of water on their carts, barely standing on their aching feet.
Every drop is worth its weight in gold.
Washing dishes.
Flushing the toilet.
Washing faces.
Cooking.
What more needs be said?
Can you imagine living in a city without water?!
And what will happen when it gets cold?
Heating multi-story houses is impossible without [water-based central heating]. Moreover, many
apartments don’t have glass windows, only plywood. People are afraid
install glass windows, worrying that, in spite of the ceasefire, they
can be shattered once again by artillery shelling. 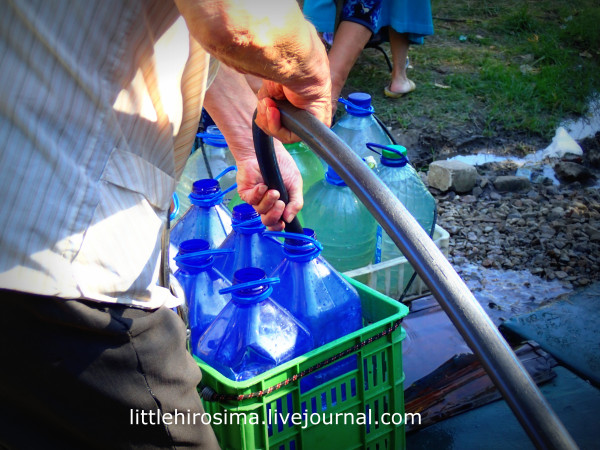 The only thing that is being discussed on the internet, on this city’s
many forums and groups, is the water problem.

Everyone is complaining
about the current city administration. But for some reason everyone is
forgetting that it’s not the administration that deprived the people of
water. It was not the local government that deliberately – yes,
deliberately – shelled the city’s water supply system to bits.

I saw how Olya Ishchenko, the acting mayor of Pervomaysk, went to visit
the drilling workers. I don’t understand anything about it.
There were signs on walls, covered with wise words. And Olya talked to
the workers as if she was doing the drilling herself and understood the
precise weight of everything in this world.
In the meantime the workers are doing everything to solve this problem. 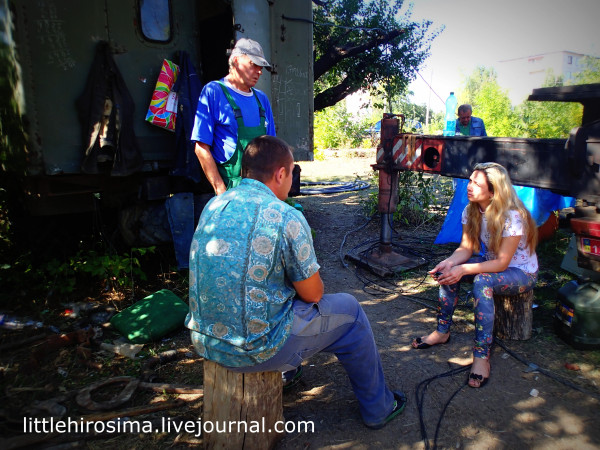 Lugansk has not given any money for the drilling and pumps–“your own
means will have to suffice.” Which is understandable, considering the
catastrophic situation of the region as a whole.

But how is the city to deal with it? The main sources
of income for the city’s budget, namely property taxes and utility fees, are not
being collected. Simply because many have no work, and in addition many
no longer have anything to pay fees for–there’s no roof, no windows, no
walls. The city is more damaged than any other city on the Donbass.
Every house bears signs of shell damage. Nearly everyone spent the
winter in cellars. I’ve seen in personally and wrote about it more than
once.
Many don’t have money because they have nowhere to get money from.

The city’s utility workers deserve a monument–many of them have worked
even under fire and with no pay at all. They patched up roofs, repaired
pipelines, eliminated leaks faster than in peaceful cities. They did it
to the accompaniment of howling artillery shells. We’ve brought a lot of food and medicine to this city, and I’ll write about it later.
But right now it’s not as important as the problem of water.
I had a thought, what if we tried to collect money to help the city to buy pumps and drill wells more rapidly?
We’re not even talking a lot of money. For example, an average pump
costs 50 thousand rubles [less than a thousand dollars]. Give or take, depending on its power and where
you buy it.
So I’m asking those who trust me to participate.

I understand this may sound like a strange request. It’s abstract, and
it’s not as understandable as, say, helping the elderly with diapers
and care supplies. But I think it’s more urgent. Considering that
EVERYONE needs water. And especially heating.

We are going to continue delivering aid to the most needy in the region
(orphans, homeless, retirees, multi-child families, retirement homes,
orphanages, etc.).
But if you decide to send money specifically for the water, then write
in your letters or payment descriptions “Pervomaysk Water.” If you don’t
indicate that, the money will go directly to humanitarian aid for the
needy.
I will transfer the entire collected sum, and only the collected sum, as
specified by you, to the acting mayor Olya Ishchenko. Everything we buy
will be photographed and posted here.

If anyone wants to help with the purchase, or even buy the pump itself, please write to me, we’ll think of something.
In general, we are considering all possible aid options! Thank you for caring!

Study: US is a global leader … in mass shootings, expect another one in 64 days