Littlehirosima: Donbass is coming back to life

Original by Yevdokia “Dunya” Sheremetyeva published on the littlehirosima blog; translated from Russian by J.Hawk  and originally published at South Front. November 11th, 2015

Yesterday I went to a beauty salon in Lugansk.
My faithful haters now finally have a reason to write that I am
wasting humanitarian aid, having fun, and other such things. I can also see your confusion at the sight of words “styling” and “manicure.”

But here’s what I will tell my friends–Donbass is coming back to life.

Girls are going to get their hair cut and manicures done.
There aren’t that many customers. But new beauty salons keep opening up. Restaurants and shops too, all over the region.

The people here don’t have much money.
But the retirement and social benefits and salaries are being paid regularly since the summer.
For many of the locals, prices for virtually everything–clothing, food, medicine–have grown sky-high.

But my impression of the city has changed.
Earlier there was a sense of endless nightmare.
But now there’s hope.

It doesn’t change the fact that dozens, hundreds of people have lost their homes and everything they had.

It doesn’t change that people are constantly sick. Our friends are constantly reporting deaths in their families.
Not from wounds. But from changes in blood pressure, heart attacks, strokes.
And even cancer…
But life goes on.

Pervomaysk is now giving funds for reconstruction.
Process has begun.
In Uglegorsk the process is already well underway – 23 bombed-out houses are being rebuilt.

This is Nina Dmitriyevna Bucheneva. On January 29 her house was bombed flat. She left for the bomb shelter only two hours earlier.
She survived.

On September 12 the work on rebuilding her house had begun. 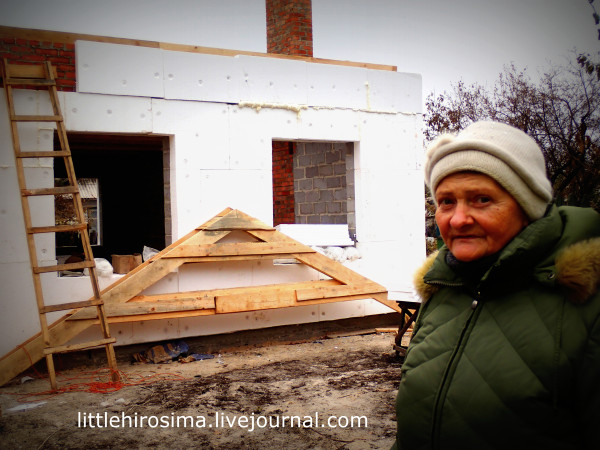 Life is slowly returning to normal.
But it’s still very fragile, very thin, very ephemeral.
It could be all very quickly and easily broken.

Syria: Citizens returning to recaptured towns, with a war conspectus

Modesty, honor, and guts: a young French volunteer for Donbass