Littlehirosima: This was a school

This is Uglegorsk. Right next to Debaltsevo and Gorlovka.
Only six kilometers from the border with the “Ukies” – that is the only word the locals use for them.

We hear incoming every 5-10 minutes, the slow “whomps.” Heavy artillery.
I shudder every time, because I’m no longer used to it.
LPR has been quiet for a long time now.

–It’s exercises.
The night watchman at the School No. 42 distractedly drops his hand.
– But they shell all the time. Maybe it’s not exercises. Who knows.

We slowly go up the stairs.
–The physics classroom…Or used to be… A huge hole in the floor. Direct hit.
There’s still writing on the blackboard.
The cupboards are full of textbooks and tools. For physics.
A thick layer of dust on chairs and desks.
An image appears in my head–my daughter goes to school.
She’s too young for physics. She’s little.
But I meet her every day at the door… 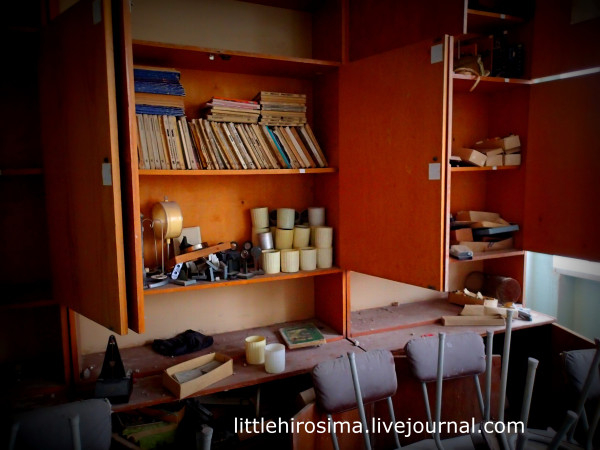 – Many direct hits?
I ask a senseless question.
And I get an equally senseless answer.
–Try counting them. Many.

This is the second floor. There is a poster on the wall on electromagnetic waves.
Textbooks mixed up with bricks and broken glass. Rubble. 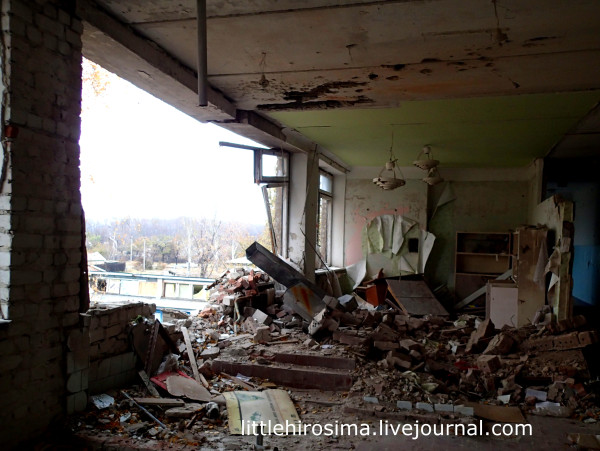 –This is the math classroom. See the hole? The shell went right through.
Not a single intact window in the whole building.
Only naked holes. Or frames with shattered remnants of windows.
Some were shattered by the shells, others by the blast. 
–And what’s this?
I point at colorful geometrical figures on cupboard shelves.
–Haven’t you gone to school?
The watchman looks at me with humor.
–Of course I have.  Students made them?
–Yes.

A lot of time has passed since the school became a deserted pile of rubble.
With mummified physics instruments, textbooks, and paper and glass tetrahedrons and octahedrons.
I think the schools are the most difficult aspect of this war to explain. There’s a rowan tree next to the school.
Big, full of juicy fruit.
It seems to be a favorite of the birds from this whole neighborhood.
Leaves have turned yellow, and it is now indescribably beautiful.
I see a geography globe above…It’s visible through the missing window.
The geography classroom.

–They say it will be rebuilt. The school. They promised.
It’s a big, spacious school.
I can see, in my mind, kids running in waves toward the cafeteria after the bell. Someone is kicking a backpack, someone else trying to trip their friend.
Boys are pulling girls’ hair, girls scream. 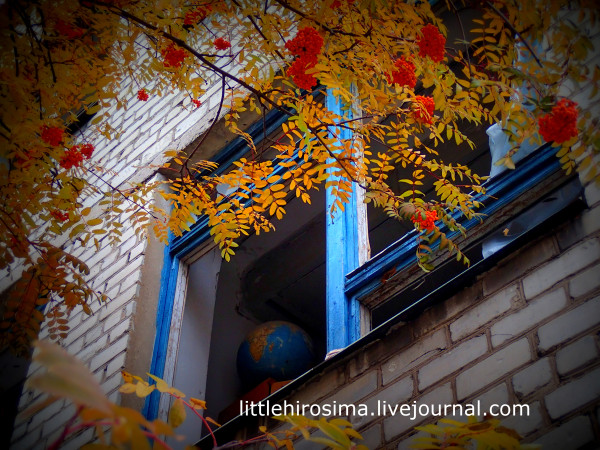 There are only two schools in Uglegorsk. Both were destroyed last winter. One was rebuilt. That’s where the town’s kids study now.

The School No. 42 is now only a skeleton.
Abandoned. Without windows.
The first floor had windows covered with plywood to stop random people from getting in.

It will be many years.
But the school will be rebuilt.
I know it will be rebuilt.
It will graduate many children.
They will stand with beautiful bouquets. And with radiant smiles.
The girls will wear bows in their hair, as tradition demands, but also short skirts to horrify the older generations.
The boys will pose with their diplomas for their parents’ cameras.
Some will go behind the building to smoke, until they see a teacher.
Everyone will have flowers. Many flowers. Many, many. Everything will drown in flowers.
The school will be beautiful once again.

But I will forever remember it like this. And you should too.
These desks.
This rowan tree.
These tetrahedrons.
Remember it forever.
Something like this must not be forgotten. If you want to help, contact me through my livejournal account, through Facebook, or via email: [email protected] (or send Paypal+message to the same address). Everything will be delivered and reported.