In this post, I’ll speak not as a translator, editor, or analyst, but as a person.

For all of you who didn’t know, our regularly featured hero, Dunya/Evdokia Sheremeteva/”littlehirosima”, had a birthday recently. I didn’t know what to give her, because any money I could spend on a gift would be better used for humanitarian aid, and I’m no good at cheap, sentimental gifts. I’ll figure something out. For now, I decided to write this post.

The Donbass conflict caused an explosion of individual humanitarian efforts – mostly because the expansion of instant communication and social networks enabled regular people to know what’s happening, where help is needed, collect funds and organize delivery all by themselves.

Think of response to Hurricane Katrina, only disaster is many times bigger and lasts far longer, and instead of helping, government is the one blockading food, water, power, and medicine deliveries.

Incidentally, similar efforts by regular people also did a lot to clothe & supply both armies, enabling them to function (and giving a new meaning to the term “civil war”), but I won’t get into that controversial subject, and just talk about people providing humanitarian aid.

To most of us, me included, “humanitarian aid” is just words on a screen. Still, I have some idea how activism works – I’ve been doing online activism for a year and a half now, met a few people in person, talked online to many more. In short, it’s done by all sorts of regular people, because it needs to be done, and there’s no one else to do it. And it is quite draining.

I am, personally, a very stress-resistant dude. I don’t have children or a long-term girlfriend, and what I do is publish articles online that most of the time aren’t even my work. Basically, I’m in a safer position than many other online activists – some of whom have lost jobs over this, for example. But even for me, the stress of having to put in hours and brainpower for the greater good – and the subtle guilt every time you fail – is real.

This is exacerbated hundredfold for the humanitarian aid volunteers. They usually have families and jobs they have to abandon for days or even weeks, to go to warzones holding large sums of money they’re constantly accused of stealing (and many people actually do steal humanitarian aid, which is often the hardest thing to deal with), in order to work face-to-face with people in terrible situations they are often incapable of fixing.

I would use the “real-life superheroes” cliche, but superheroes can at least be anonymous – humanitarian volunteers have to stay very public, dealing with constant harassment and publicity without any of the perks of other kinds of celebrities (contrary to popular belief, “lots of experience driving around with armed rebels” or “successfully smuggling industrial quantities of insulin across international borders” are not things that look good on a resume, a government grant application, or a blog post your grandma reads). And yes, it’s not the proverbial “thankless job” – both because there are plenty of thanks, and because there’s no salary and you don’t get to go leave it behind at 5 pm, or at any hour.

It takes a heavy toll – after a year and a half, all the humanitarian volunteers that I know personally, who work in Donbass or with Donbass refugees in Russia, are dealing with varying degrees of sickness, family trouble, depression, and financial ruin.

Posts, phrases, or thoughts about their problems regularly slip between requests for medicine, wheelchairs, clothes, and shelter for others. Dunya-”littlehirosima” seems to be doing somewhat better than most, thankfully, or just talks about it less, but right now she, too, does have some health problems.

So… I thought it’s worth pointing out that aid volunteers aren’t simply vending machines for humanitarian aid. Here are a few examples of their daily reality.

Guys, I’m looking for a place to live. I certainly can’t afford an apartment, so probably just a room.

Unfortunately, money is very tight, and what little I have goes to paying the loans – because when doing humanitarian aid you can be either poor&honest, or not… I chose the former.

Ideally, I’m looking for a room in exchange for helping around the house – one can dream. I’m a great cook ))

We will be living together with my daughter (11 years old)… We don’t need anything other than a place, we can bring furniture and adapt to anything else, so long as the place is fit for human habitation… It would be awesome if a miracle happened and this place was also close to Rizhskaya area, where my daughter goes to school…

Doing my work for the Humanitarian Aid Center, I leave for Donbass quite often, in those periods my daughter stays with grandma…
…
I ask everybody to help by reposting, please
…
Finding a job that provides housing is not an option because of the regular and often unscheduled trips to Donbass, obviously
[they found a place – ed.] 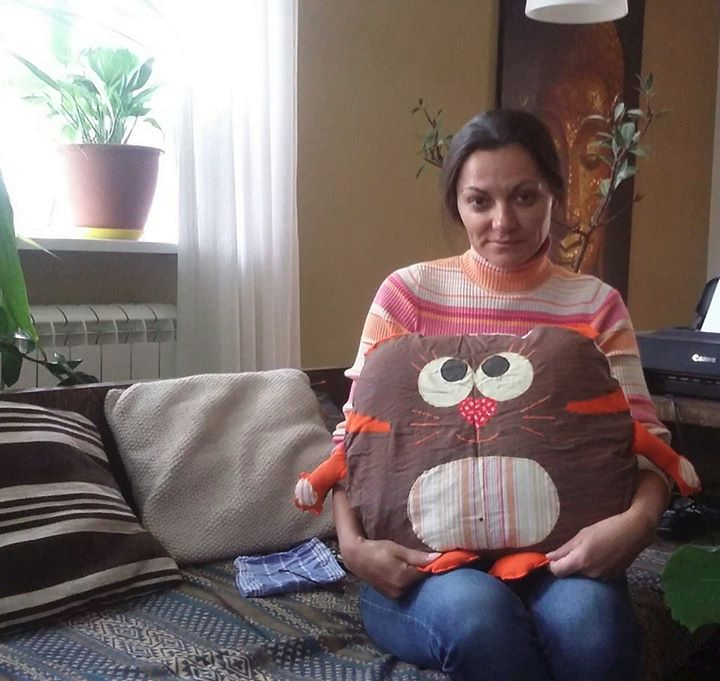 This is Lena. Our Lenochka.

The guardian angel of our group in Lugansk. Recently I got Zurab Zarubin’s permission to post this photo and talk about her on her birthday.

Tonight her place was flooded by a burst water pipe, and [her] Zhenya had a heart attack because of that story with an unknown idiot messing with Katya, [the cancer patient we’re trying to save]. Lena got the paramedics, then sat with Zhenya until he went to sleep from the drugs, then gathered all the water from the earlier flooding, and stayed up to make borsch, because Katya mentioned that it’s something she really misses.

After all of that, Lena was up at 6 am to make breakfast for Zhenya, because without her he is depressed and does not eat, then went to Katya’s friend – to do the paperwork so that the friend can receive aid money for the child instead of [bedridden] Katya.

And then she headed to the hospice. With a container of borscht, fruit, candy, and some medicine.

Right now she is at the hospice, running around taking care of Katya and the other patients because the place is severely understaffed.
We almost finished gathering money for electric tea kettles, [so that the disabled patients can get non-freezing water without trekking to the nursing station]. Thank you.

Our guys in Lugansk are just the greatest. Please think of them and send them strength. 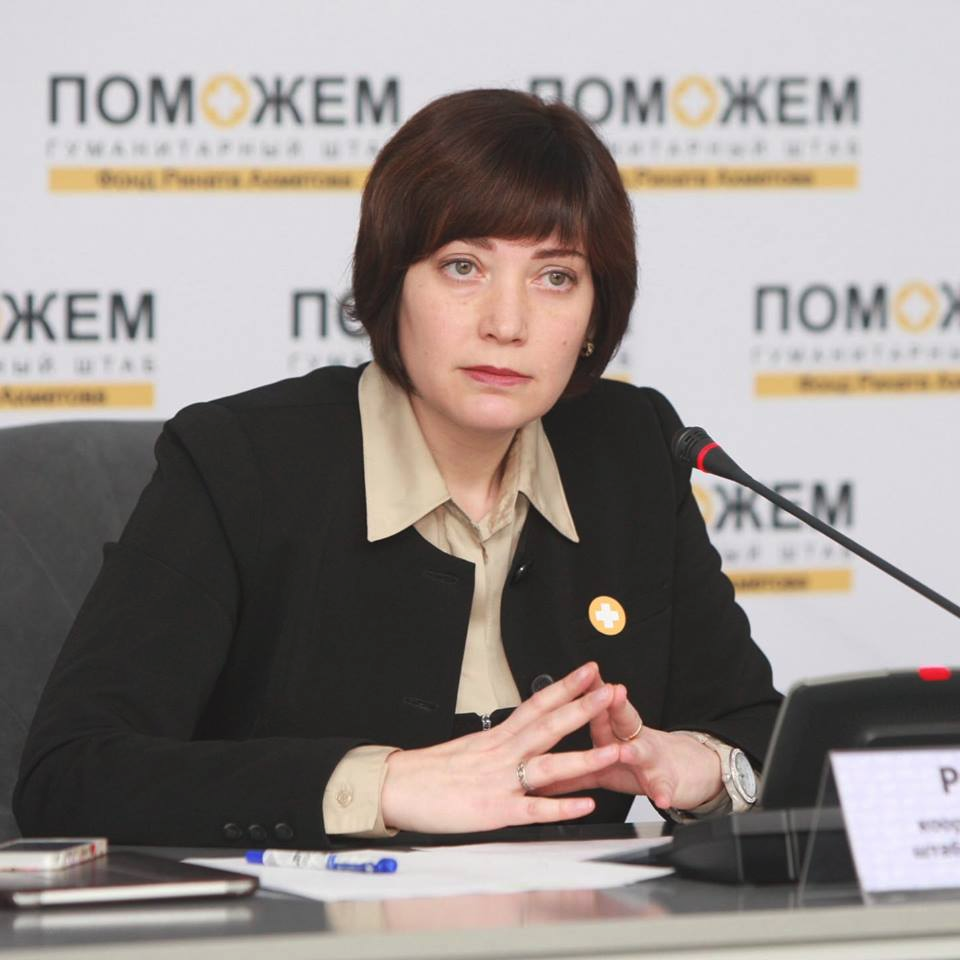 Nowadays, there are a lot more humanitarian volunteers, because there is a lot more need for them. … People from different backgrounds, followers of different religions – all united to save their compatriots.
…
They risk their lives, sometimes quite literally – driving refugees out of war-torn cities in their own cars and minivans. What moves them to do it?
…
One girl recently wrote on Facebook: “I don’t want to be a humanitarian volunteer [anymore]. It’s scary and painful.” Yes, it is. Sometimes – very much so. But it’s also very necessary, when so many people need help.
For a year and a half, we at the Ahmetov Humanitarian Fund spend days and nights helping others, without holiday breaks and days off. Just regular folks helping other regular folks.
One of my colleagues working our hotline, a refugee herself, with huge personal troubles, recently told me – “doing this saved me from going insane myself due to hopelessness and grief. When I talk to people about their problems, I stop thinking of my own”.
…

Many more examples can be found, especially on Sozanchuk’s page – she has a lot of experience in the field, and also often writes against embezzling or simply irresponsible humanitarian volunteers. I won’t bog down this article with tons of examples – that’s not the point.

The point is that, as a typical guy, when I see a problem, I start thinking of ways to fix it. But in this case, I can’t think of much that can be done to help.

Monetary donations are very important, of course, and huge kudos to the Fort Russ, South Front, etc. audiences here – Dunya/“littlehirosima” writes that by now over half of the donations are coming from abroad, frequently from people who have no personal connection to Donbass.

But while cash helps the humanitarian cause, aid volunteers can’t take it for themselves – they would feel like they’re taking from the sick/starving people they can help.

Kidding, of course – another way humanitarian volunteers are, apparently, similar to superheroes is that it’s never a good idea to put too many of them in the same room (for largely the same reasons, i.e. unique people with big egos).

I suppose I’ll actually listen to what these people are saying. And all humanitarian volunteers generally post the same thing: “Your support is very important to us, and to the people we help”. The photos below, from Dunya/Littlehirosima, show how personal words of support and encouragement can mean the world to their patients.

I think that’s true for the aid volunteers themselves, too. 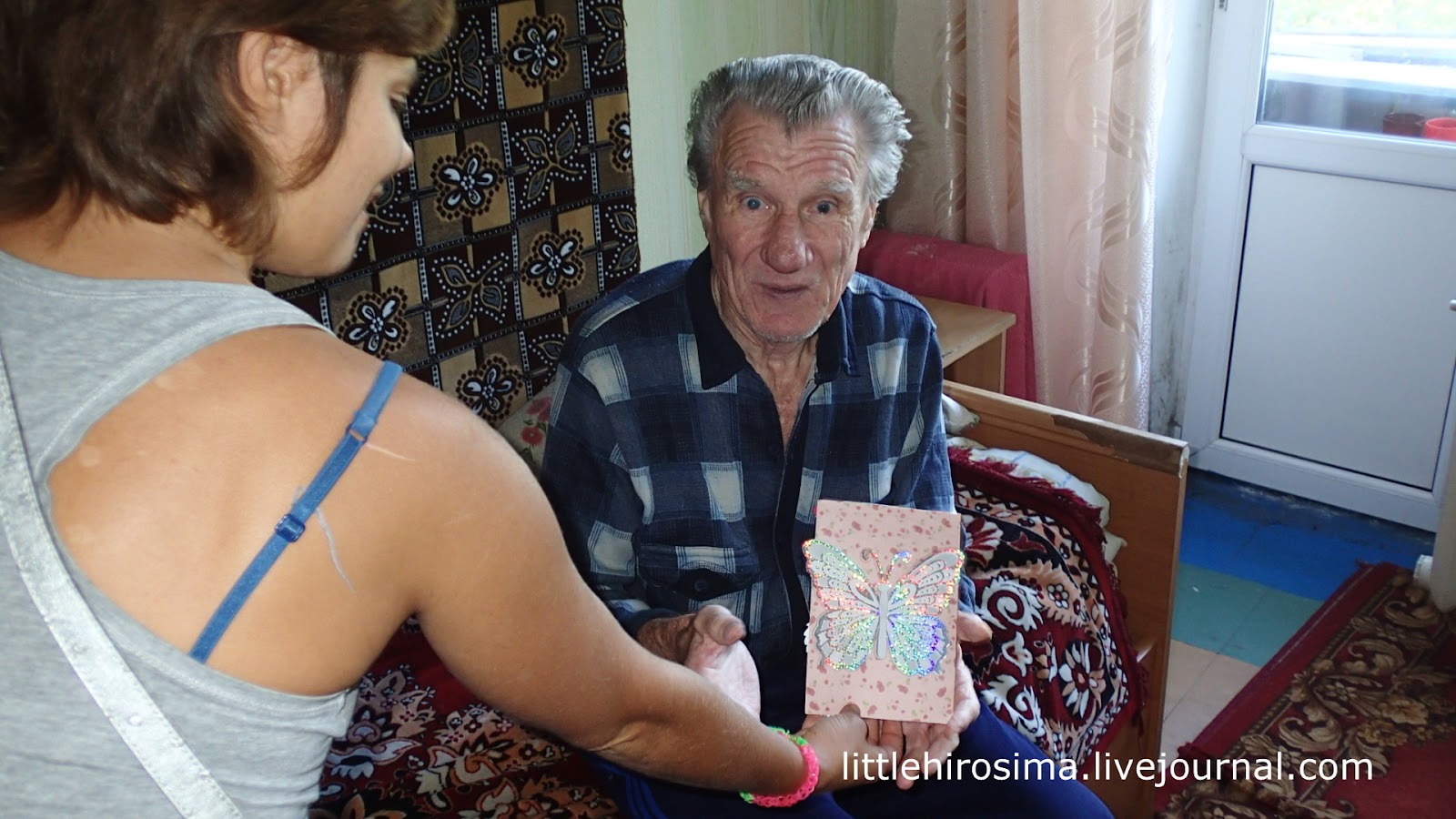 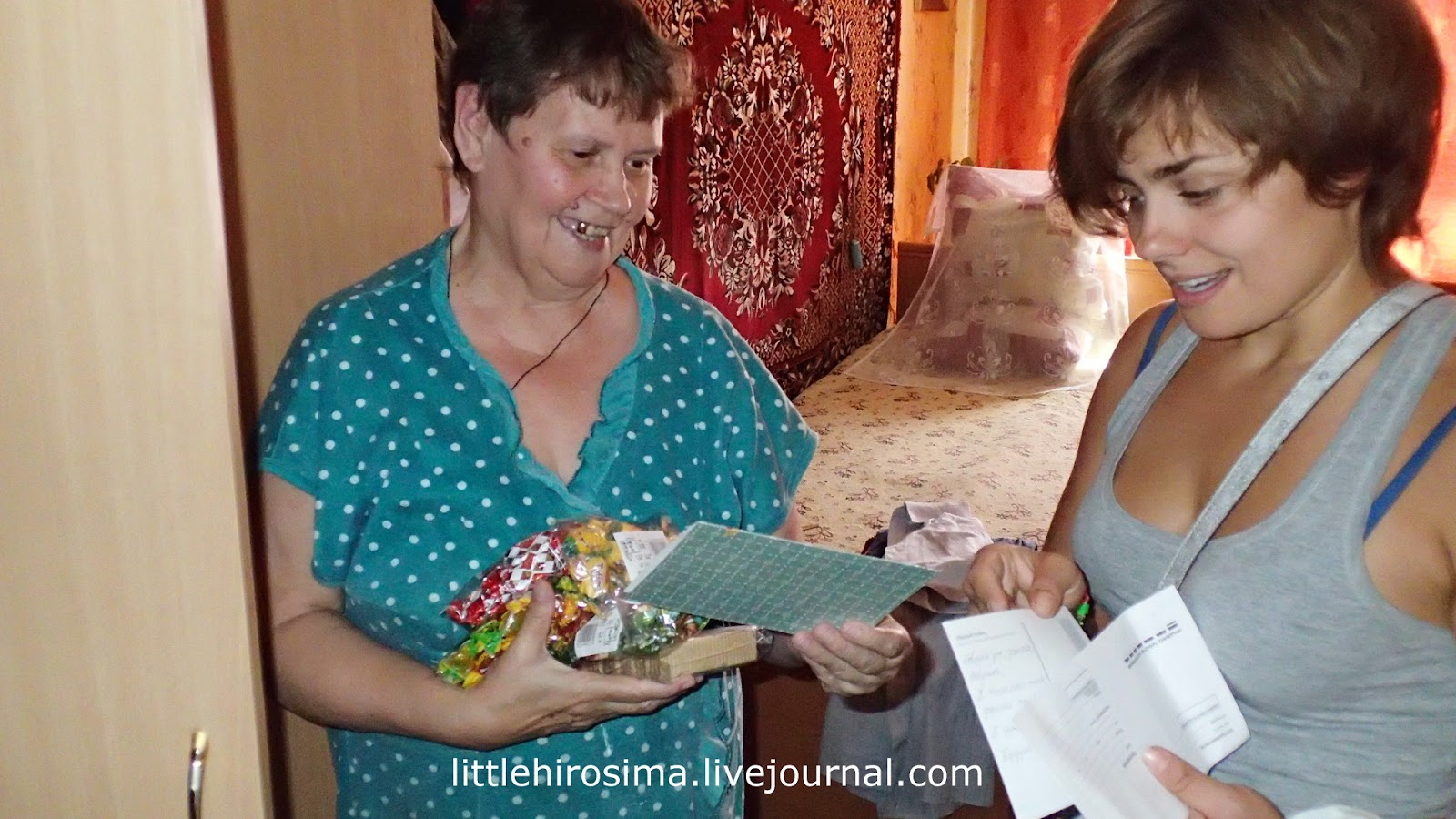 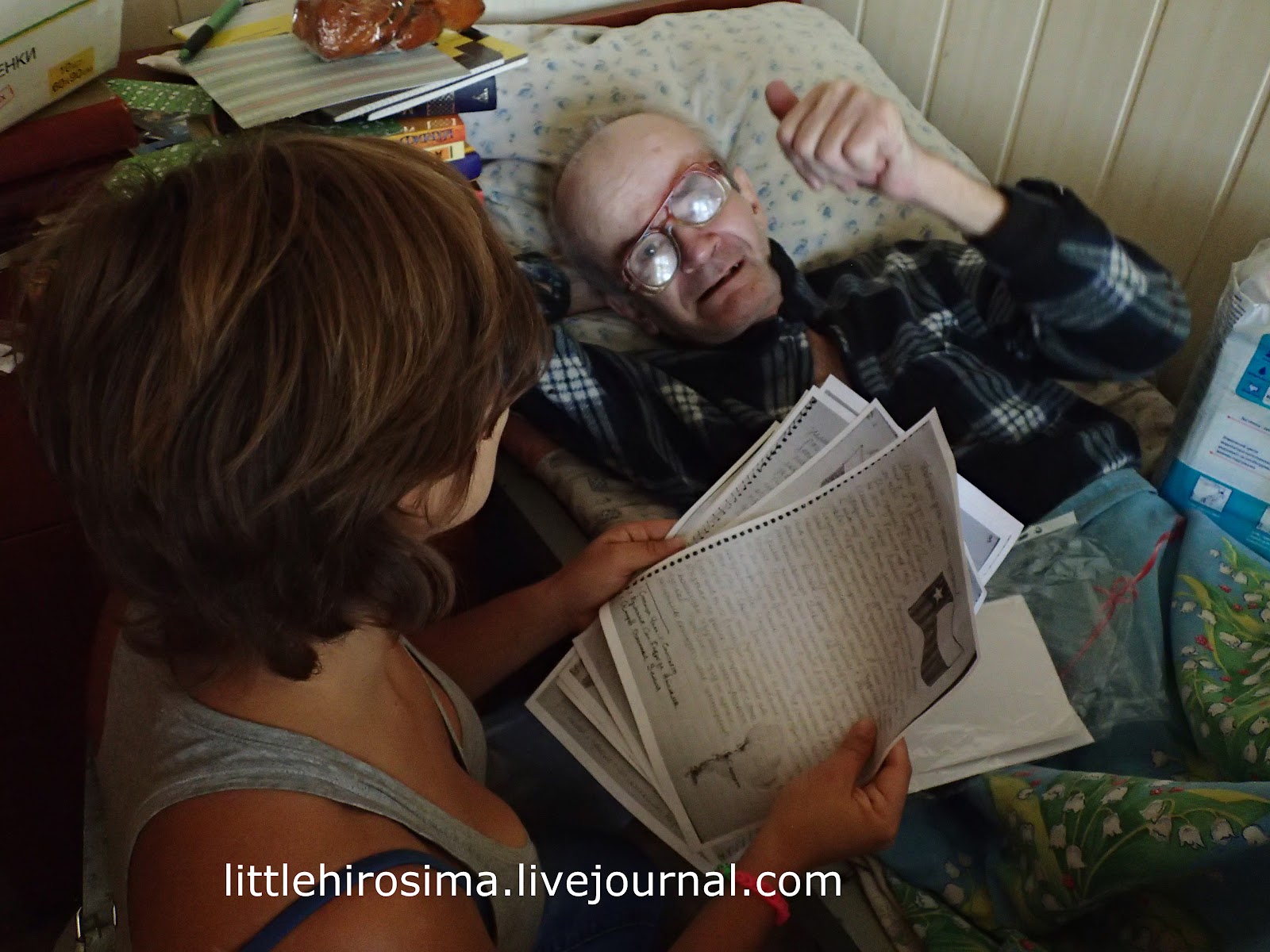 So, this is what I intend to keep doing, and I suggest you do it too – read their pages, write words of support, share and/or translate their words. Maybe send a postcard or two :).

Here are the volunteers that I talked to/translated over the past year and a half.

I know Evdokia and Olga rather well, Galina and Milagros – less so, Rimma – by her articles only. But everything I know shows that they, and the majority of the thousands of other people doing humanitarian aid, are are very good and selfless people.

Evdokia Sheremeteva AKA littlehirosima (and here are all the translations)

Milagros Boyrie (BTW, she makes bouquets – so if you’re sending flowers to anyone in Moscow… She speaks pretty much every Romance language to some extent, and of course Russian, but not English, so either use Google Translate or chat with me first.)

Galina SozanchukRimma Fil’ (here is another translation of her writing, with some background on Ahmetov Fund. Yes, she works for an oligarch – their fund already helped over a million people)

Olga Siberian (we worked on translations, but she also worked with refugees)

Please keep these people in your thoughts – and prayers, if that’s your thing. And try to support them if you can.