From Tatzhit: This was forwarded to me by my friend “Rachael Lane” for consideration. I’m publishing it as received, with minor editing.
I’m by no means an expert on Turkey, so I can’t independently verify whether those people are actually affiliated with ISIS/AL Nusra. I would appreciate if any experts can give their opinion in the comments.December 3rd, 2015.

“It’s Saturday night and I’m going to meet some friends at a restaurant, we’ll eat, drink and have good time. I meet up with these two at Ciğeristan Restaurant, owned by Kember from Ciğeris Brothers, every chance I get. We laugh and joke, tell stories and drink our beers. We smoke ‘em if we got them and if we’re lucky maybe see more of my friends. If I’m very lucky, maybe someone will snap a photo of me and my friends together.”
Said No Terrorist Ever.

Hollywood has nothing on these guys. They know the who, the what, and how to manipulate the media into thinking they are being persecuted while all the time going behind the media’s back and to getting away with terrorism, murder by the hundreds, and becoming ürber rich as the sell all the plunder, blood-sweat- and-tears, oil and artifacts they take from the people!

These images were sent to me by a friend who found them on this blog  and sent with the following tweet; “This was posted on Turkish social media. Erdogans son Bilal, with leaders of the ISIS & Nasra.” 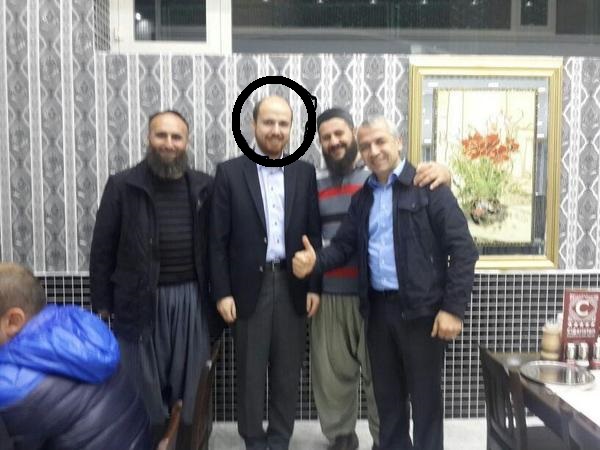 2 President Erogans son, Bilal Circled Center, with Leaders
of ISIS and Nasra. Identity of man on the right unknown.

3 President Erdogans son, Bilal Erdogan, Standing in
the middle with  & Leaders of ISIS & Nasra on either side.

4 More as stated above.

Inside the mind of an important figure…