MIGHT “Made in Russia” labels become common? If currency depreciation alone could boost exports, then yes. According to our latest Big Mac index, the Russian rouble is one of the cheapest currencies around, 69% undervalued against the dollar. The index compares the cost of the famous burger at McDonalds outlets in different countries by converting local prices into dollars using market exchange rates (as of January 6th, see chart 1). It is based on the idea that in the long-run, exchange rates ought to adjust so that one dollar buys the same amount everywhere. If a burger looks like a bargain in one currency, that currency could be undervalued.

Americans hunting for cut-price burgers abroad are spoilt for choice: the index shows most currencies to be cheap relative to the greenback. This is partly owing to the Federal Reserve’s decision to raise interest rates when the central banks of the euro zone and Japan are loosening monetary policy. The euro is 19% undervalued against the dollar, according to the index, and the yen 37%. Another force weakening many currencies, including the rouble, has been the ongoing slump in commodity prices since mid-2014. Shrinking demand from China and a glut of supply have sapped the value of exports from Australia, Brazil and Canada, among other places, causing their currencies to wilt, too. By the index, they are respectively 24%, 32% and 16% undervalued. If commodity prices continue to fall, they could slide even further.

Between 1980 and 2014, according to an analysis of 60 economies by the IMF, a 10% depreciation relative to the currencies of trading partners boosted net exports by 1.5% of GDP over the long term, on average. Most of the improvement came within the first year.These large currency devaluations can hurt, by raising the price of imports and spurring inflation. But although devaluations may not be pleasant, they are meant to be nutritious. Pricier imports should encourage consumers to switch towards domestic products and stimulate local production. A cheaper currency should also boost growth by spurring exports. 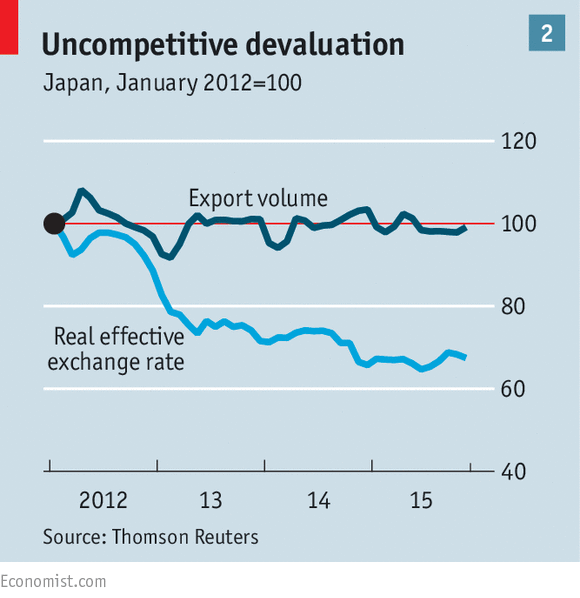 But devaluations do not seem to have provided quite the same boost recently. Japan is the best example. The yen has been depreciating rapidly. A Big Mac was 20% cheaper in Japan than in America in 2013; now it is 37% cheaper. Yet export volumes have barely budged (see chart 2). This is a surprise: the IMF calculates that Japanese exports are around 20% lower than it would have expected, given how the yen has weakened. Devaluations in other countries, including South Africa and Turkey, have also disappointed.

A global contraction of trade in dollar terms may be obscuring devaluation’s benefits. Although exports from countries with weakening currencies may look limp, many of them are still securing a bigger slice of the shrinking pie. The collapse in commodity prices is also masking some signs of life. Take Brazil, where the volume of exports rose by 10% in 2015 even as their value plunged by 22%. Some of that is caused by commodity exporters compensating for falling revenue by selling ever more minerals and oil. But not all of it. In Australia, for instance, exports of goods other than raw materials jumped by around 6% in mid-2015, according to the Commonwealth Bank of Australia.

Russia is a good example. Non-energy exporters appear to be struggling despite the rouble’s plunge. Over the first half of 2015, as the volume of energy exports surged, non-energy exports fell, according to Birgit Hansl of the World Bank. She points out that it is not enough to have a price change: “First you have to produce something that someone wants to buy.” The rouble’s weakness is an opportunity for industries that already export, such as chemicals and fertiliser. But boosting other exports requires investment in new production, which takes time.But there are also signs that “Dutch disease” has taken a toll on the capacity of commodity-producing countries to ramp up other exports. When prices were high, capital flowed in, pushing up their currencies and thus making their other exports less competitive. Labour and investment flowed mainly to commodity firms. That has left other industries too weak to pick up the slack now that these once-soaring currencies have fallen back to earth.

Both the IMF and the World Bank have highlighted another possible explanation for the weak performance of exports in countries with falling currencies: the prevalence of global supply chains. Globalisation has turned lots of countries into way-stations in the manufacture of individual products. Components are imported, augmented and re-exported. This means that much of what a country gains through a devaluation in terms of the competitiveness of its exports, it loses through pricier imports. The IMF thinks this accounts for much of the sluggishness of Japan’s exports; the World Bank argues that it explains about 40% of the diminished impact of devaluations globally. That leaves many manufacturing economies in a pickle.

David Bowie Was Almost Arrested at a Train Station in Sverdlovsk