Already the 10th trip…Can barely keep up with writing about it all.

For the first six months, I went to the Donbass every month. Now the trips are less and less frequent.

It’s because we needed a day or two, which was simple to arrange.

Now even a week is not enough.

There are more and more stories.

The number of people we assist is getting bigger and bigger.

Reports are about the most boring thing to write.

I hate them. They eat at me.

And in the end, they are a sequence of photographs of me against the background of food and ruins.

Nothing could be more crass.

But what can you do. In the last six months, the majority of funds for our humanitarian trips has come from foreigners.

I think I have mentioned everyone, but I am still surprised at the concern shown by people from all over the world–Australia, New Zealand, England, USA, France, Canada, Sweden, Norway, Netherlands, Spain, Serbia, Brazil…

Thanks to all who help our team in our small effort! Together we are strong! )

Thanks to Lenochka Zhukova, Tanya Anikina, Sergey Belov, Denis Semyonov, Vladimir Domnev for not only their financial assistance but also for help with buying everything we need.

Thanks to our Moscow Zhenya for eking out time for these trips. And for his car. It’s scary to think how many potholes it has managed to discover…

Thanks to Zhenya and Lena, my friends who make all of this possible.

And here we are) Our Lugansk Zhenya is hiding behind Lena. Yes, he’s a Jedi ) 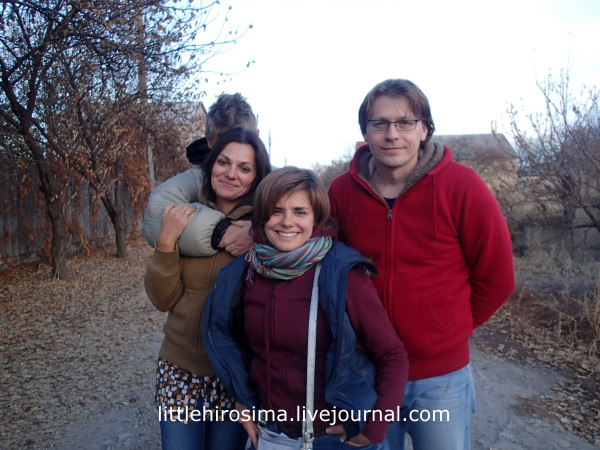 Accounting is worst of all. It drives me nuts. The receipts, the bills of lading, etc.

Economists, financiers, accountants must be gods! 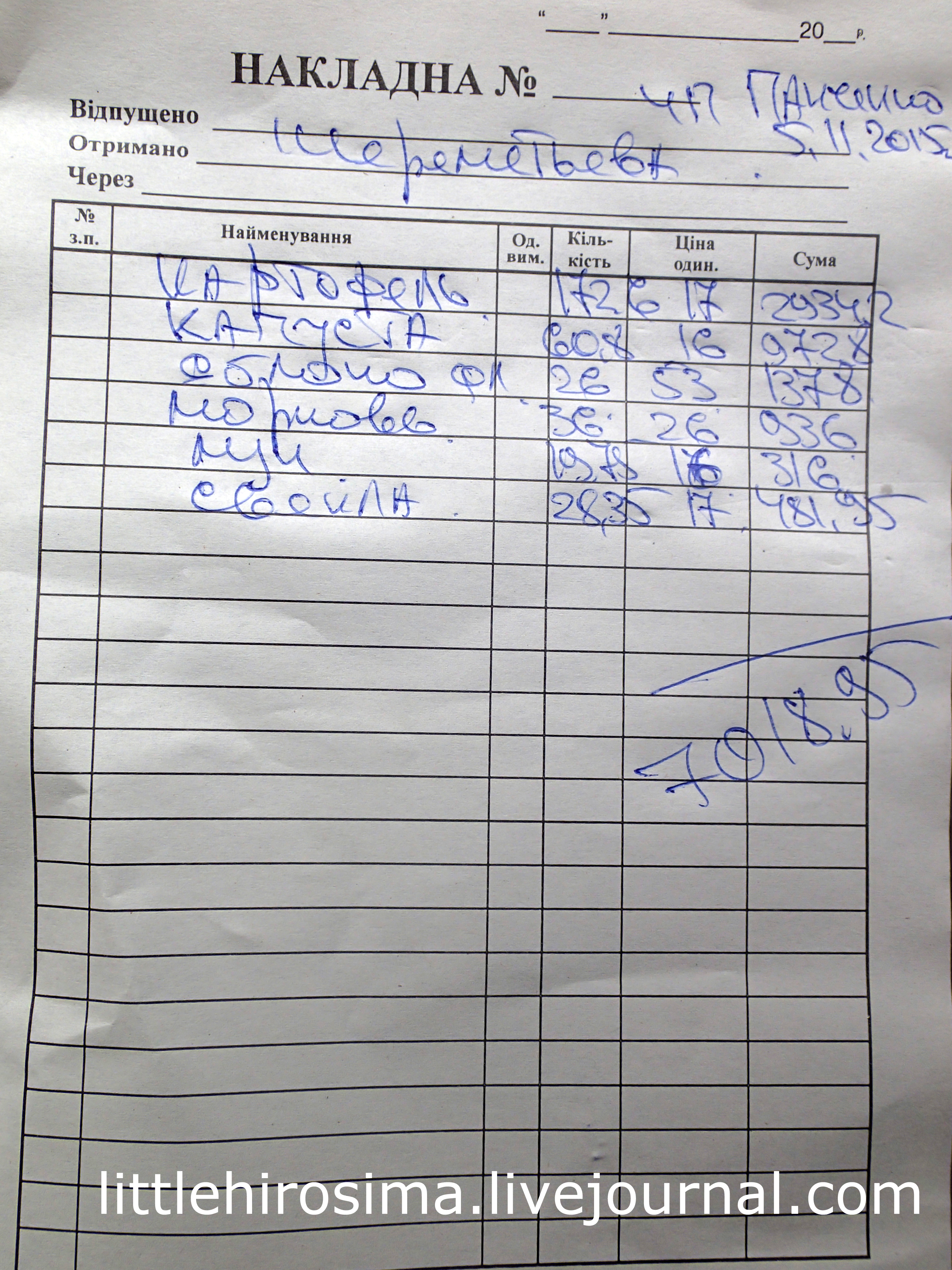 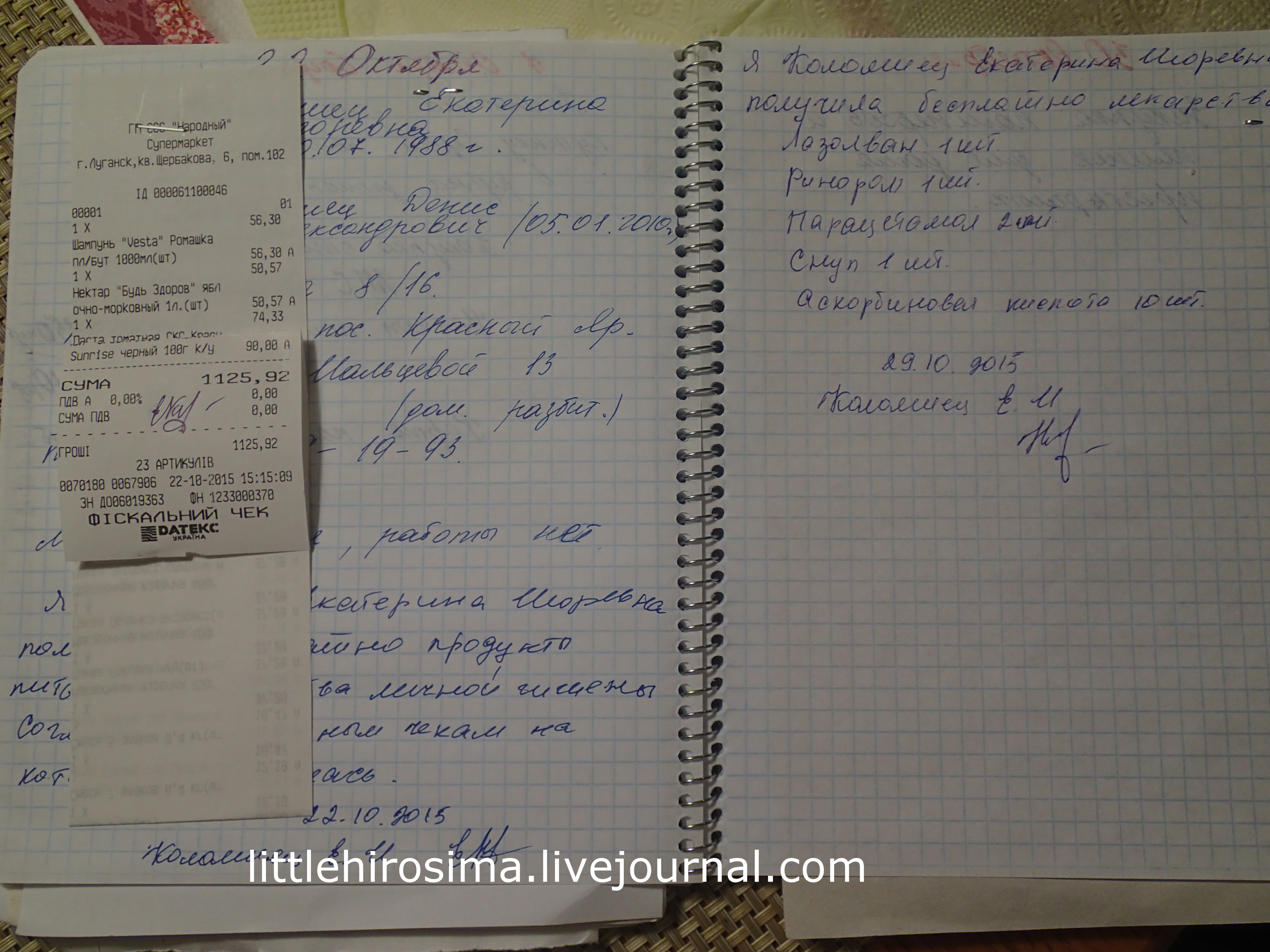 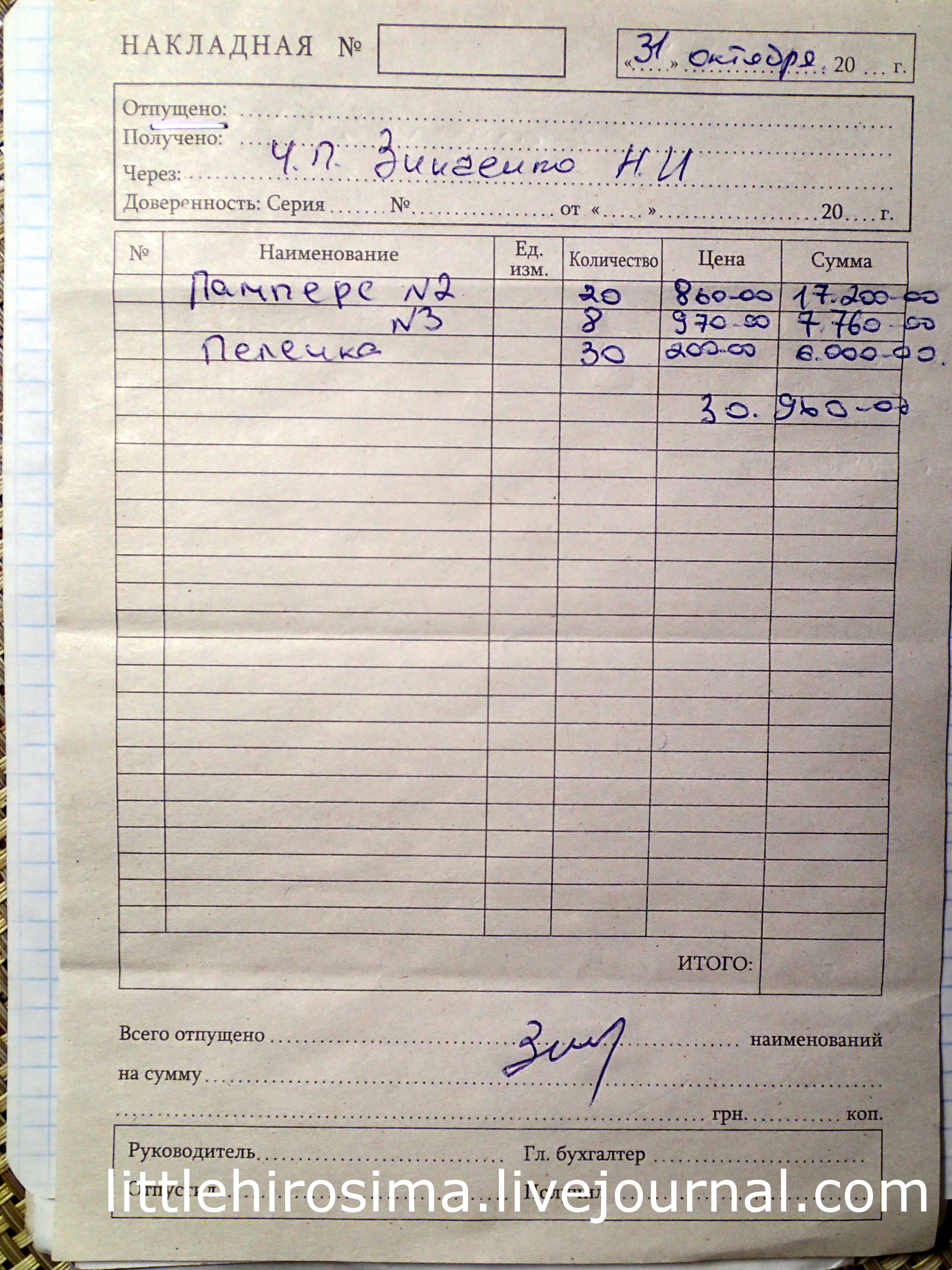 We don’t take as much stuff as before because we are in a regular car. But all that we bring is critically needed.

We deliver all we bring to the Lugansk Center for Assisting the Vulnerable. 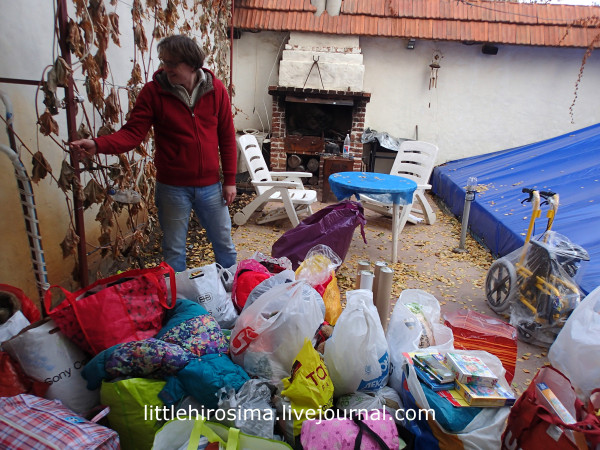 Before the trip, Zhenya asked we bring a few things for Katya Kolomiyets and her son. I didn’t write about it on the blog, only on facebook. We got many responses, and thanks to them both Katya and her son now have all the clothes they need. Almost everything you sent fits them. Thank you! 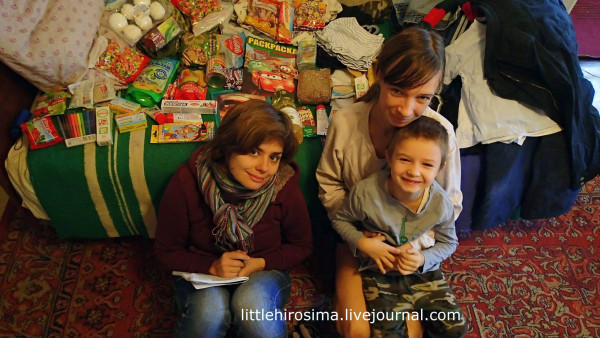 Katya from Krasnyy Yar had to flee–her roof was shattered, so was the stove and other parts of the house. She’s just 27. She now lives with friends in Lugansk. Her son’s father left while she was still pregnant. He lives in Novoaidar, a village on the other side. He doesn’t help at all. The boy is often sick and Katya herself is also very thin and sickly. I wanted to write about her separately but didn’t manage.

Forgive me for that. 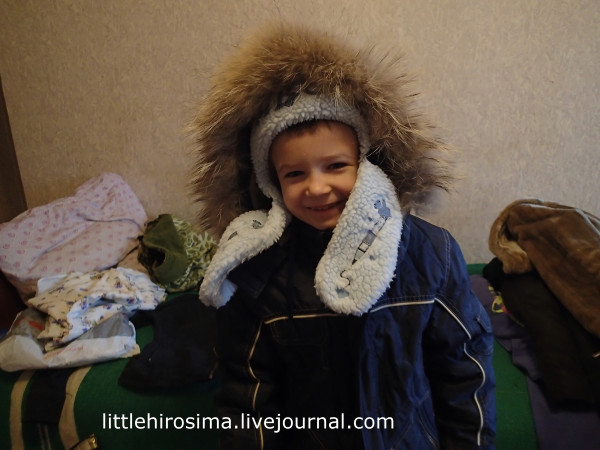 On that occasion we got a lot done.

We brought food and sweets to an orphanage in Krasnyy Luch.

Helped the Lugansk Technical School for the Disabled.

We also brought vegetables, diapers, and care items to the Lugansk Regional Retirement Home No. 1 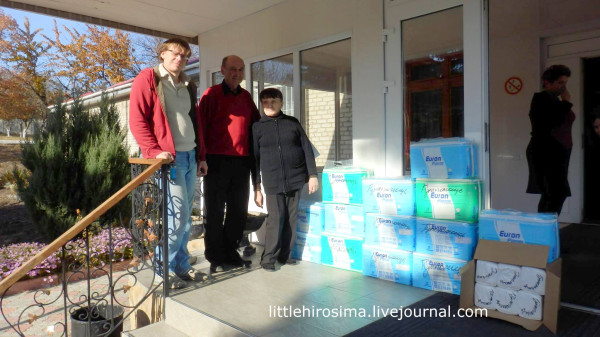 I was going to write a separate report about that, but didn’t quite manage. I can only say that it’s an exemplary institution. Clean, beautiful, and pleasant. It’s a pleasure to visit an institution like that, from where you don’t want to run away as fast as you can. We helped specific families in Uglegorsk.

This is Valentina Kuzminichna Gorbovtsova. She lives with her husband in Uglegorsk, with no other family. Their house was struck by a shell while they were inside. Their room was miraculously left untouched. Here’s the house and the stairway. That’s where they still live. This is Anastasiya Afanasyevna Kulikova. Can hardly take care of herself. Her adopted daughter and granddaughter live in St. Petersburg. The daughter pays for a nurse who visits once every several days.

The house is a big mess. Anastasiya Afanasyevna herself is a terror. Neighbors were sitting outside, snacking on sunflower seeds. They all complained about the difficulties with her, and about the fact her daughter is not helping. But the neighbors do help, so they deserve huge gratitude. Because one of the biggest problems are the elderly with dementia who do not have relatives. We visited our permanent “wards” in Lugansk.

And we of course went to my dear Pervomaysk. We got there on Thursday while the city government was in session, so we met Olya Ishchenko only in the evening, which was too bad.

We provided medicines according to the list of needy individuals. 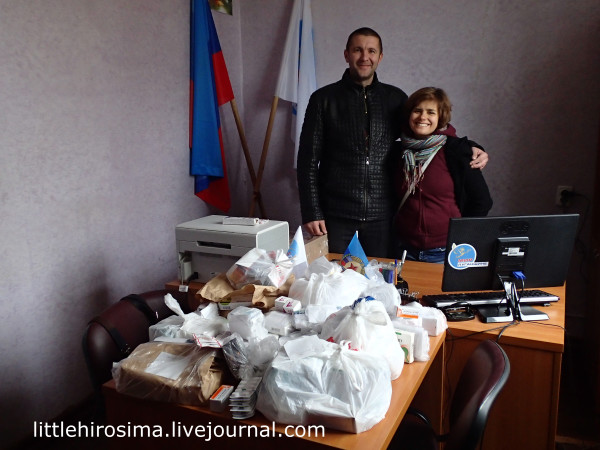 As we were delivering the medicines, we met Tatyana Mikhailovna. We learned she’s Tatyana Mikhailovna from the tag on the door through which she entered. There was also the fearsome “School Director”, which turned out to be absolutely true. She asked us with a hint of displeasure:

–Did you bring us something? We’re about to celebrate the First Graders’ holiday and we have no presents to hand out!

Zhenya and I exchanged worrying glances, then hurried to the store next door.

So we helped prepare small presents for the first graders–apples, pies, and chocolate bars )) We helped the little Veronika who suffers from epilepsy. Russian expats in Austria sent her a walker, and we also brought a wheelchair that was bought by Sergey Beglov.

We also brought vegetables to a city dormitory for those who lost their homes. 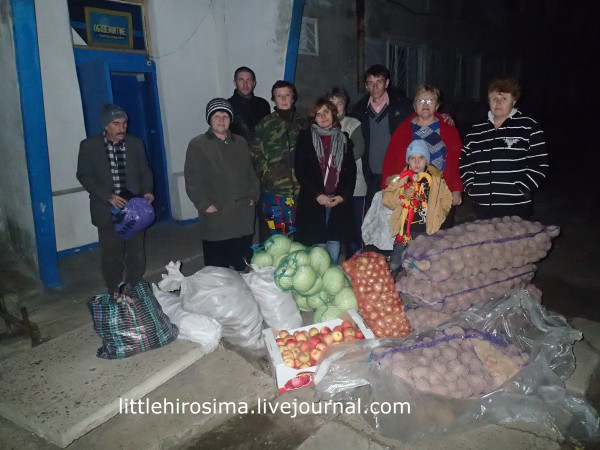 We also help long-distance. For example, we sent Pervomaysk’s acting mayor Olga Ishchenko 100 thousand rubles to restore city’s water supply. The city was able to restore the supply. Maybe twice a week, for some more frequently and for some less, but it does exist. Now the city’s main problem is heating, with some houses still being cut off. Coal is being handed out, but it’s a hard problem to solve in a shattered city that neighbors the war. We also helped with presents for three Christmas parties.

Once again, many thanks to those who help us. By transferring money, bringing medicines, providing presents, supporting us.

My hands sometimes drop, but I know one thing for certain: together we have tried to make the world just a little bit better.

Letters of thanks which have saved me on the border more than once: 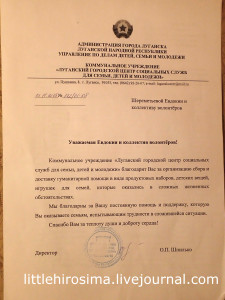 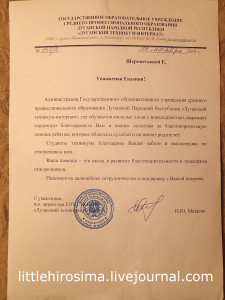 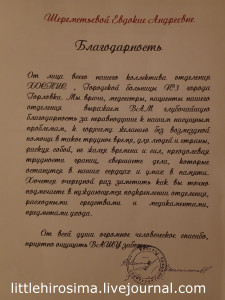 “You, too, can contribute to helping the people of the Donbass. Contact me in person through my livejournal account, through Facebook, PayPal ([email protected]), or via email: [email protected]”

U.S Prepared Hitler for War With the USSR (Part 8)