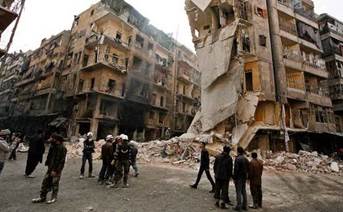 There is a real scandal and indignation in the sum of shameless mendacity which journalists of the main TV channels and newspapers resort to in describing the military operations in Syria that could mark a turning point in this war, this war that has bloodied the country for almost five years.

The acme of scandal is reached in the description, completely upside down compared to reality, of the battle for Aleppo, which could prove decisive for the fate of the war. The big industrial city, situated in the North of Syria, has always been the country’s economic capital. In 2012 the city was attacked by jihadist gangs of various stripes, largely made up of foreign mercenaries and jihadists, who almost managed to surround it and to occupy some suburbs comprising various industries and the main electrical and water plants, and also to infiltrate into some central districts.

The residents, though not in any way cooperating in the assault, suffered all the consequences. In fact, all the industries were dismantled by the jihadists, who were constantly replenished by neighboring Turkey with weapons and reinforcements. And they sold the industrial equipment in Turkey itself, of course with the complicity of the Turkish authorities.

But as the city continued to resist, thanks to an uncertain supply route located to the southeast of the center and kept open by the army, the jihadists, who were meanwhile joined by militia of the Islamic State (or Daesh) coming from the East, from Raqqa, cut off the water and electricity to the besieged, and at the same time bombed the central neighborhoods with rockets and mortars, and harassed the besieged by bloody attacks carried out with car bombs and other means.

The most serious and deadly attack was waged against the University with the death of dozens of students. For documentation of all this there is, among other sources, the increasing evidence of the bishops of the city’s Christian community, who also report that they have dug wells in the precincts of the churches to alleviate the suffering of the hungry population. This is evidence that the journalists could not ignore, even if they did not want to give credence to the detailed information provided by the SANA agency, the Russian sources (Italian Sputnik-edition), and the Lebanese sources (Al Manar).

The Syrian army counter-offensive, launched in the last months of 2015 with Russian air support, was aimed first and foremost to “liberate” the city from the siege. The army therefore advanced “from the city center to the suburbs and neighboring villages” to ward off attackers. Toward the North-East, the large military base of Kuweiri has been “liberated. It is located about 25 kilometers off, and was under siege for over three years. This liberation pushed Daesh to the Euphrates.

About 40 kilometers to the North-West two towns have been “liberated” which were also under siege since 2012, by jihadists of Al Nusra Front (Syrian branch of Al Queda) and its allies the Ahrar Al Sham and Free Syrian Army. The SANA agency showed jubilant crowds that greeted the liberating army. Also towards South-West the army is advancing to reopen the roads to the provinces of Homs and Hama and allow a greater flow of essential supplies to the population.

Well, the words used by our regime journalists shamelessly say the exact opposite of reality. According to them (and according to the stuff they are fed) it would be the national army that “advances towards Aleppo” to “reconquer” it, as if the city was in the hands of insurgents and foreign mercenaries, and not instead besieged for over three years by the jihadists. And the Aleppo residents are fleeing to Turkey, “terrified by Russian bombing.”

Actually within the city limits the fighting isn’t going on anymore. The jihadist groups and mercenaries who had infiltrated the city are surrounded and have only the prospect of surrender or reaching an agreement with the government like to the one reached by jihadists who were surrounded in an isolated district of Homs and were escorted to the Turkish border with the buses provided by the government.

The front is now quite a bit north of the city just 20 miles from the Turkish border (News of February 7). The national army wants to reach the border town of Azaz to block the continuous supplies of weapons and foreign mercenaries that Turkey furnishes.

Also in other parts of Syria, as in the extreme south in the province of Deraa, the army is driving the jihadists to Jordan (which prudently is changing its hostile attitude towards the Syrian government) while the section of the border with Turkey in the north of Latakia province (where the Russian aircraft was treacherously shot down by a Turkish missile) is now under army control, blocking the infiltration of mercenaries.

Faced with this turning point in the war our journalists — who for years have ignored the hunger and thirst of the trapped civilians in Aleppo and kept quiet about their tragic conditions that caused many to flee the city and end up as refugees — now tear their clothes talking of civilians fleeing the fighting.

They echo the propaganda and the demands of the two criminal adventurers, the Turkish President  Erdogan and his Prime Minister Davutoglu, major contributors to the Syrian massacre along with the Saudis and the US, calling for the end of “the Russian bombings.”

But this pseudo-humanitarian fervor arises only from the fact that the mercenaries of neo-colonialism and imperialism in the service of the West and the obscurantist Gulf monarchies are losing the war and that Syria, with the help of Russia, Iran and Hezbollah in Lebanon, proves a tougher nut to crack than they expected. When people resist it is true that “imperialism is a paper tiger.”