Original by Yevdokia “Dunya” Sheremetyeva published on the littlehirosima blog; translated from Russian by J.Hawk and originally published at South Front

There was no better holiday in my childhood.

I secretly awaited it. And I searched in my parents’ cupboards for presents, just in case.

There was information and rumors all over the kindergarten that there is no such thing as Snegurochka [young girl companion of Santa in Russian tradition – ed.]. I had my faith tested. Honestly, I don’t even remember when I decided that it’s a made-up tale.

Now I am a smart adult and I know the truth. Santa does exist. How could it be otherwise?

First time I went to the Donbass was just over a year ago, before the New Year. There was active fighting then, but we brought gifts for the children just the same. We distributed them in the bomb shelters, cellars. We gave out candy to kids in the street.

And today, what makes me happiest is that we helped those children who needed it most – from families of single mothers, mothers with many children, those who were left homeless by the war. 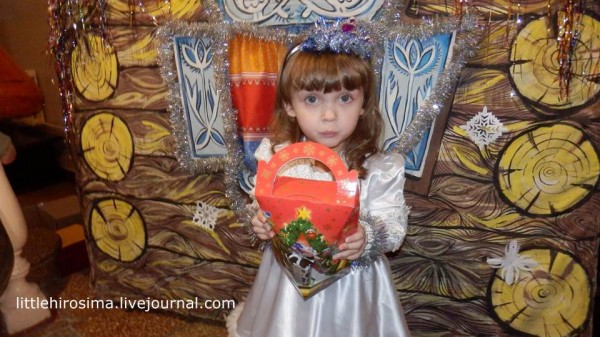 I am insanely sad that this post is written using Zhenya’s reports and photographs. I really wanted to be there myself.
I just received over 100 photographs from the party organized by the City Center for Family Social Services, where the presents were bought with the money we collected.
Zhenya, thank you for the good reporting. 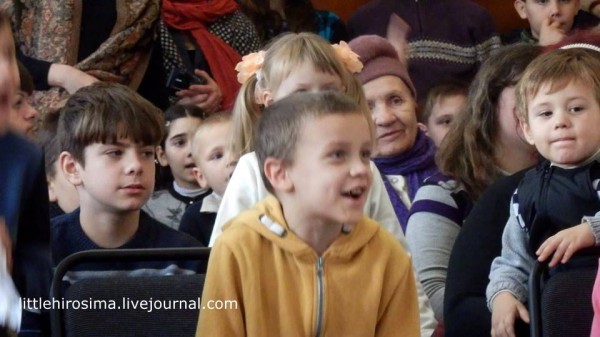 I want to thank everyone who answered the call. Thanks to you we could buy the best Christmas gifts that were available in Lugansk.
Zhen’ka said that when he brought them to the Center, the workers there were in awe. Each individual gift set included about half a kilo of outstanding chocolate and waffle candy. Something the kids could not even dream about.
These days the children’s Christmas parties in Lugansk hand out small packets of lollipops. At most. Because usually they can’t provide any presents at all…
We actually managed to collect more money than we were able to transfer to Lugansk, since the process is not exactly a simple one. Moreover, we made the decision to raise funds for Christmas presents rather late–that was my mistake.
Therefore all the leftover money will be spent on presents for others.

We will try to procure presents for an orphanage.
Some of them I’ll deliver myself in January.
It will be already after the holidays, but I will still want to visit the Rovenki retirement home and deliver some sweets. Even after the holidays. Some of the kids I know gave me postcards and drawings to give to the elderly. 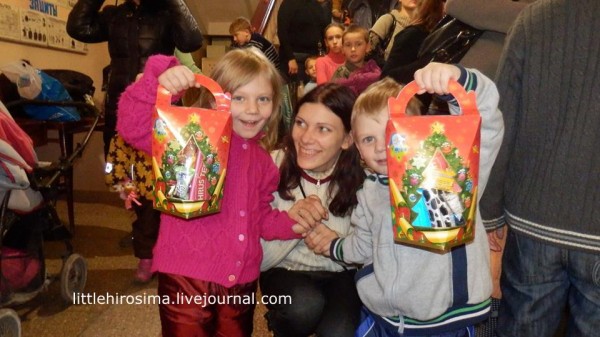 One way or the other, the gifts turned out to be awesome. Kids, parents, us, workers, were all happy things turned out the way they did ))
Our whole logistics chain worked outstandingly well ) 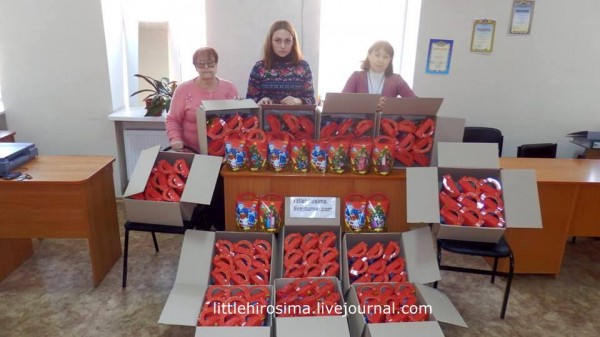 The auditorium was completely filled with kids watching the show, they even ran out of chairs for everyone. 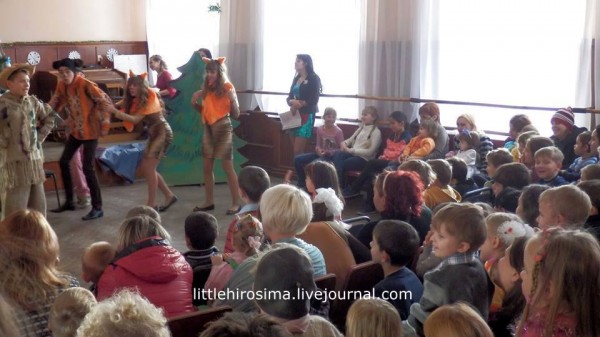 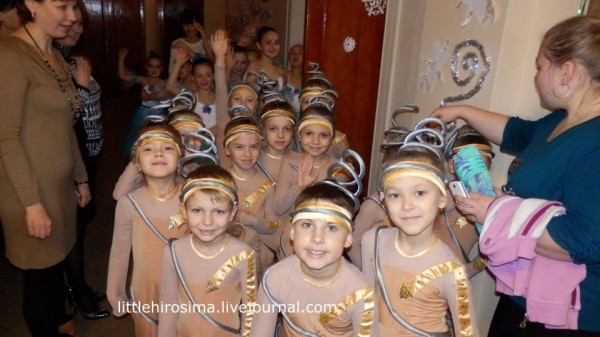 What can I add? Just look at the happy kids.
A holiday should be a holiday everywhere.
That’s incredibly important. It’s important that the kids in a warzone retain their belief in miracles. In joy. In fairy tales.
It’s hard to describe that perception, but New Year is extremely important for these kids in particular.
More important than for kids anywhere else. 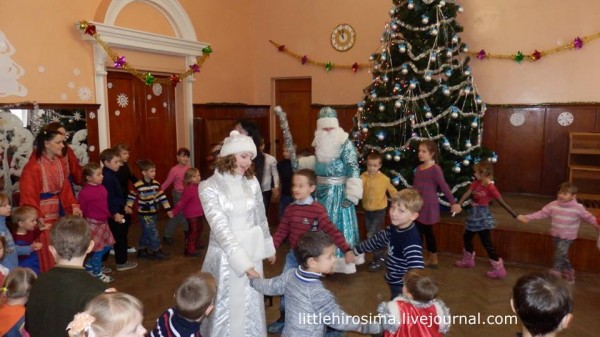 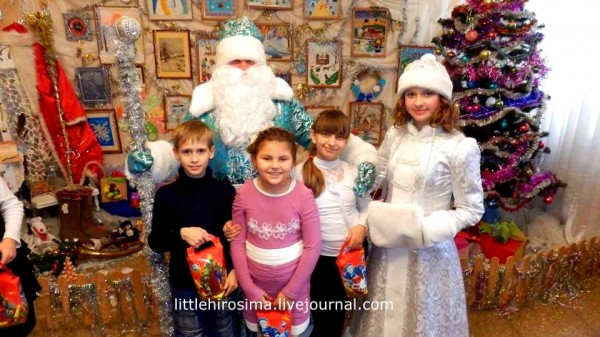 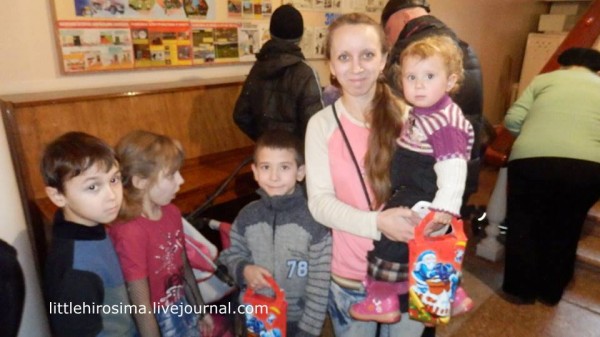 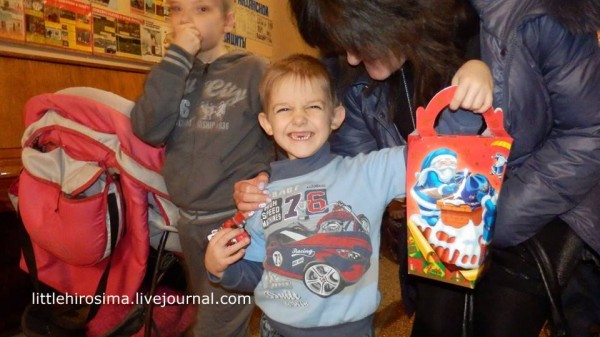 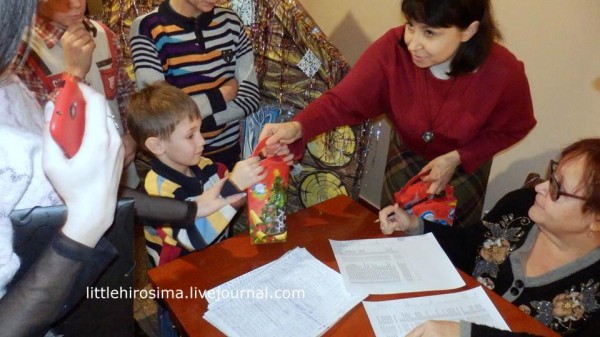 Here’s the full list of kids who received presents. 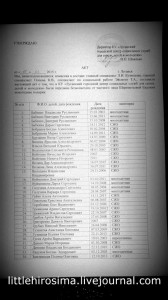 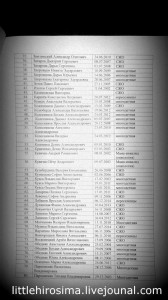 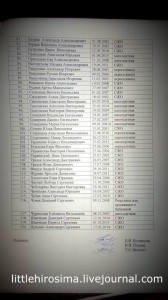 Zhenya found candy at a wholesale retailer and even managed to get a discount – the receipt is below. In a store one would have to pay 550 rubles and not even get the same selection. He’s our hero! 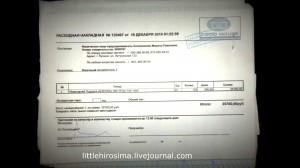 And below is an official letter of gratitude to myself and to all of you. You are also our heroes!
It would seem the role of Grandfather Frost [Santa – ed.] fits me quite well 😉
Happy New Year to everyone!!! 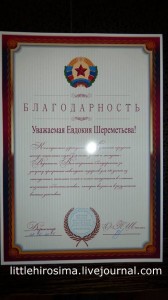