Littlehirosima: Old Age, As Is

Old Age, As Is

Original by Yevdokia “Dunya” Sheremetyeva, translated from Russian by J.Hawk and published on the littlehirosima website (yes, Dunya now has her own website! – ed.)

Right now, my father is in his bed.
He hasn’t been able to move for the past year and a half. He’s laying there, thin, small like a child. The
wrinkles on his face are almost fully smoothed out, and now he’s growing
a thick beard.
Papa was shaved his entire life. Always. As a kid, I always
admired men with mustaches—the Cossack look. But papa was always clean
shaven.
Now he has a grey beard and
huge, light blue eyes. Nobody in the world has eyes like that. Those who saw such eyes know what I’m talking about.  He’s laying on his side, and we pick him up
and set him down using special levers on the bed. He has bedsores on
his back, and one could study anatomy just by looking at him…

Papa is a genius. A very talented editor, writer, and poet, whom nobody knows…
Once upon a time he told me that it would be stupid for me not to write.
He still recites poems from memory, but otherwise he’s mostly detached from reality.

Every time I write a post, I think—what would papa say?
He’d naturally critique it to death. He’d say I’m painfully illiterate. But he believed in me like nobody else. Even though he’d tear every post to shreds.
To be honest, this post is not about him.

Rather, it’s about one of the retirement homes on the Donbass, one of many. In the midst of war, cold, and obscurity.
Every one of my posts, it’s papa.
Every stroll down a floor full of bed-ridden elderly, it’s papa.
All these floors full of pain and maddening isolation, it’s papa.

But papa is at home.
Papa has us—brothers, grandchildren, mama.

This is the retirement home in Lugansk, where our Serezha Kutsenko
resides. We first met him in Hryaschevatoye, in a derelict dorm. Serezha
has a mustache, like the one I dreamed about in childhood. He has nowhere
else to go in this life.
Many other elderly also have nowhere else to go.

Should the shelling begin again, they won’t even have time to take all the bedridden patients to the cellar…Even the ones on wheelchairs might not make it.

And yet, 18 months ago, so many shells fell here.
Windows were blown out, a few trees were broken. But the building was
not hit.
No military units were stationed anywhere in the vicinity. Only forests.

We brought aid to the home, and also a few New Year’s greetings postcards – made by my daughter’s friends and my friends. Only I know how to cut my papa’s fingernails. Not mom, not brothers — nobody else can.
His hands are so tightly clenched that even tools wouldn’t help. I put
his hands into a tub with warm water, and then bend back each finger.
One after another. Sometimes I accidentally nick the skin and he
bleeds. He screams and curses at me. Mom cracks jokes and papa begins to
laugh.
And he still reads his poems. He selects each word with difficulty, struggles — but that’s his main source of pleasure.

Papa had an interesting and full life.
He was always an unusually handsome man. One in a million. If only you saw him in his youth!
He was a sportsman, a champion.
One could write dozens of memoirs about papa. His poems are a separate topic.

This granny, Tamara Sergeyevna, is from Antracit. Bed-ridden, but
fortunately can sit up. She began to cry when she received a drawing
from a boy, Feodora’s friend. This granny is Galina Ivanovna.
The nurses often ignore the bed-ridden. Just some old folks who are out of their minds.
Sometimes it’s like that. But not always. 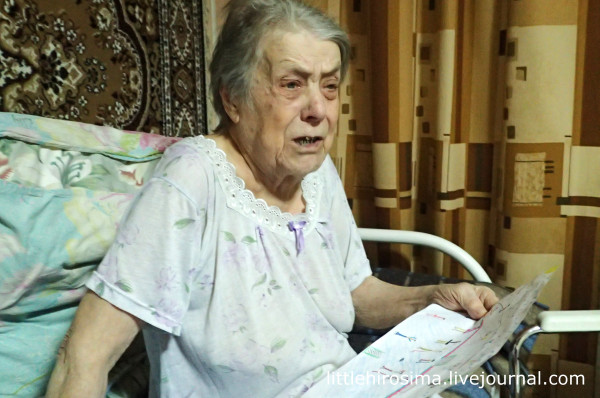 Papa spends most of his time in some other world.
He’s unusually strong in that world. He strolls through parks, he travels.
Dear Lord, he was a champion, after all! He actually was the strongest!
It’s not one of those cases in which parents are strong simply because they are parents.
My papa was a phenomenon. He could jump over four chairs from a
standing start! His sportsman status meant he was accepted the
literature institute without exams.

He traveled far and wide through Russia with paleontological
expeditions. He worked in all sorts of places – factories, boiler rooms, as a
journalist, a screenplay writer, a window washer.

And now he sometimes yells that the sea is about to wet his feet, and that Putin has dropped by to visit him.

This grandpa is completely deaf. He understood almost nothing of what I tried to tell him. He kept yelling into my ear:
—What’s that? Huh? I didn’t understand? Can you repeat?

I tried to tell him it’s a post-card from Turkey, from Galya, a girl who
is diving and who would like to wish him a happy New Year.

Papa also often can’t hear. He repeats the same thing over and over, a hundred times.

Him and mom taught me how to swim, so far away from shore that the
fishermen we encountered thought we were crazy. Oh, to dive into any
storm, and not be afraid of open water in which one wants to dissolve…
Sometimes papa answers so correctly and intelligently that tears come to my mom’s eyes.
He always calls for me or for mom. Sometimes it becomes a sort of a sad
background noise, so that when people come to visit us, they stand on
the threshold shocked that we are not rushing to see what papa wants.
But he can call for us a billion times a day.
Just because.
—Olya! Dunya!

And this is Raisa Panteleyevna. She understands all that’s happening around her very well.
She’s bed-ridden, but a wholly aware and rational person. 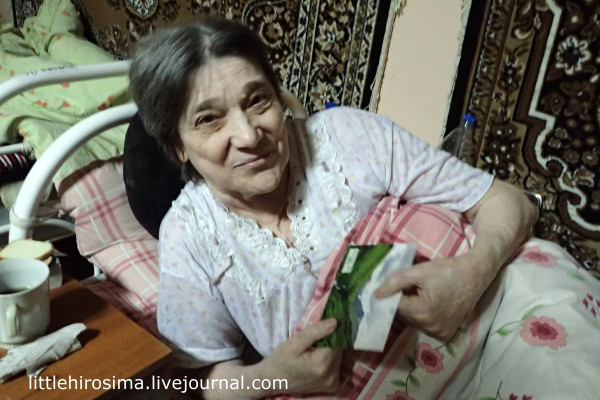 Papa sometimes looks me in the eyes and says «I am in terrible shape, and it’s unbearable.»
But mostly, he stays unaware of his condition. As if his consciousness
protected him from the sad reality, not allowing him to understand
what’s happening.
He may try to convince you that he was just recently walking, and it’s impossible to convince him otherwise.
But sometimes he is so accurate in describing a book character that it’s
clear he hasn’t lost his clarity and sharpness of mind. Some guests are
simply shocked from precise and correct judgements that he can make
seemingly offhandedly…

This is Vera Panteleyevna. She walks up and down the corridors. A charming and intelligent old lady. These elderly cannot call for their kids a billion times a day.

This was the hardest post for me to write.
Please forgive me…

Forgive me, papa.
I once again wrote many unnecessary things, and with a thousand errors… PS. Here is the aid, which we thanks to you brought to the retirement home. Thanks to all who participate in our common humanitarian cause of helping the people of Donbass.
(Receipts and certificates of appreciation will be in the final report)