Original by Yevdokia “Dunya” Sheremetyeva published on littlehirosima blog; translated from Russian by J.Hawk and originally posted at South Front

– It was noon, July 30, 2014. I was about to go to the building’s basement, where the sporting goods store used to be. And he says “I’ll go put on a shirt,”
and it was hot then. July, after all. Almost August. So he went to his
room. And I’m standing in the kitchen, with my back turned. And then
there was this huge blast of air and darkness. I went deaf and blind.
Couldn’t see a thing…

Lyudmila Yegorovna stands by the window, presses her hands against her head, and closes her eyes.

–And then it all passed, also instantly. That door, over there by the window,
was open, so glass remained intact. But every other window was shattered by the
blast. There was a TV right there. Had two antennae. One was cut off, as if
by a knife. There is still a hole in the wall.

Lyudmila Yegorovna’s apartment is small. Shrapnel holes in the wall, right in the middle of the room.
The penetrations between the roses are patched up with cement. Right
behind the TV. Which stands without its antenna. She recalls every
detail, every moment of That Day.

She walks around the room, walks and talks, as if speaking to herself.

Slowly, with heavy steps, the woman walks around the apartment as if
looking for her husband in every corner. She lifts her head toward us
and spreads her arms. Then walks on – looking down, to the sides, and
into the distance. 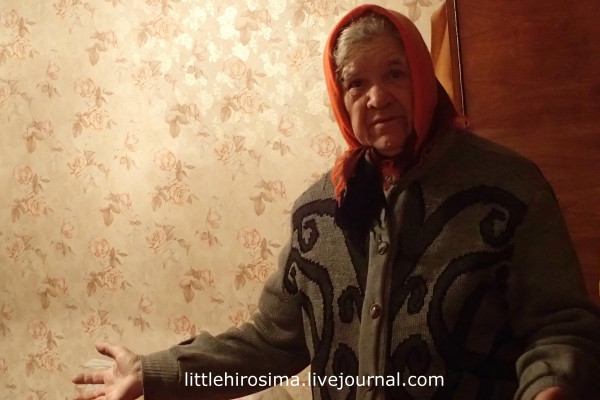 –And then I looked, and there was such a huge puddle of blood. I’m
thinking, where is he? Isn’t he here? Turns out he’s under the couch.
Like that.

She carefully puts her hands together and under he head, like a sleeping child. Her eyes
moisten. We’re quiet nearly the whole time, but it seems she doesn’t even
notice us. She tilts her head as if he was literally laying there right
now. Next to a blood puddle. Next to him.

–I thought the blood was coming out of his mouth. Not a word, he did not
say anything.

Then he was laying in this bed for three days. In his swimming trunks.
The funeral bureau sent three people, I knew them, two guys and a girl.
They bathed him, dressed him. Then he lay there for four more days. It
was impossible to bury him. That’s what kind of a war it was, [how heavy was the shelling – ed.].

–You spent a week with him in the apartment.
–Longer than that. Kids were in all the way in Zaporozhye. I was
diagnosed with a second-degree traumatic head injury. It still hurts right here.
Here. Terribly.

She points near the corners of her eyes, right next to temples. But her gaze keeps wandering about the room. 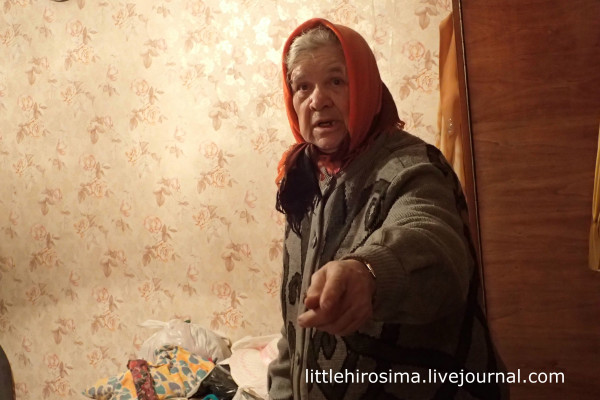 When we asked to photograph her for the report, and she saw what we brought, she started to cry and repeated several times:
–Thank you my dears, thank you!

Lyudmila Yegorovna Mogilevskaya lost her husband in the summer of 2014, during another
shelling of Pervomaysk.
She had to spend over a week in
the apartment with her husband’s corpse.

Back then, many were buried next to
their houses, in gardens. In many apartments, the corpses were simply left where they were killed. People were afraid to come out into the open to bury them.

I’ve lost count of stories like that. I’ve also lost the reactions, worries, and concerns [that regular people have]. All that’s left is this lingering bitterness over the fact that the world isn’t interested in these stories any more.
The public stopped caring about the torn drapes, the broken antennas. Most importantly, they stopped caring about this unhappy woman – still looking for her husband,
constantly asking:
–Where is he? 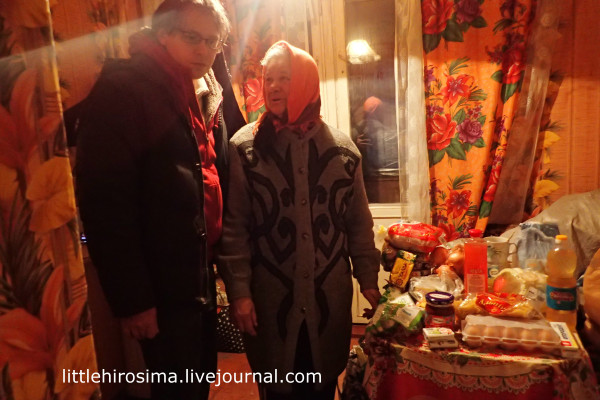 You, too, can contribute to helping the people of the Donbass. Contact me in person through my livejournal account, through Facebook, PayPal ([email protected]), or via email: [email protected]