This is Yulya. She’s 11.
She lives in Nikolayevka, a town located on the border between LPR and
Ukraine. The roar of artillery shells has never really stopped there.
One can’t even begin to describe what its inhabitants lived through in
the last year.
Yulya is gravely ill.

She’s so ill that she still has to use diapers at her age.
She understands little, and never says anything.
–It’s encelophathy. Delayed psychological and language development.
I think that’s what her young mom, Svetlana Strashko, said.

How many such kids, abandoned by their parents, have we seen in the dormitories?
One can’t blame the parents – it is very difficult to live with them. They give you no response.

But Yulya does not live in a dorm.
She lives with her parents.
She will never fall in love, get married, become independent.

There is also her little sister Lera, who’s about 2.
Lera loves Yulya and continually reaches for her. She wants to play. But Yulia doesn’t understand.
There’s also Don the Puppy and Lyuska the Cat.
That’s how they live. 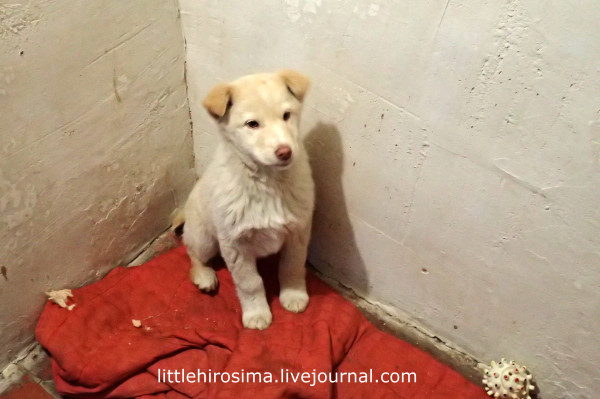 When we arrived, Yulya kept making sounds.
She went for the cabbage and tried to kiss it. Or maybe simply wanted to
put her lips against it, and I didn’t understand what she wanted.
When we gave her a stuffed toy horse, she nearly shouted from excitement. A smile from ear to ear. 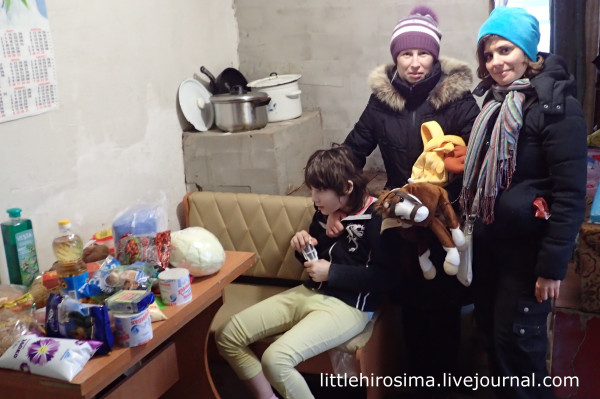 Svetlana, on the other hand, nearly started to cry when we got out the toys stuffed with candy.
– “That’s all for us?”, “Nobody’s ever helped us”.

When reading reports of other volunteers, I don’t like
to read about the expressions of thanks from those being helped, for some reason. I also try
not to write about it, because it all seems repetitive, over-the-top, and looks like a cheap attempt to elicit
emotions from the readers.

But the reality is such that many of the families who receive aid from us and other
aid volunteers…  don’t expect it. So people start to show
all manner of emotions, because they are surprised. Some cry, some fall
into a stupor, others raise their arms. And all of it is genuine. The
tears, the emotions, the unexpectedness.

It’s not even because of the box of tea, butter, or chicken.
It’s mostly about the attention.
Or maybe simply about the stress and the burdens, and our help
reminding them of reality, which they never think about due to daily hassle.
Reminding them of war. Of lack of money.
About not being able to go to the pond fishing, or to  the woods to pick
mushrooms, or to the field to run among the field flowers. Svetlana is a hospitable and smile-prone young woman.

Nearly all the parents who live with disabled children tell us about the
relatives’ reaction. How the in-laws want to blame the mother. How the
whole world is trying to convince the mother to turn over the child to
some orphanage.
How they live like hermits. How the world refuses to understand their situation.
And how hard it is to ignore everyone during wartime.

Two years ago she give birth to her second daughter. After many years of hesitation.
Then the war began, and Sveta’s husband joined the militia. PS. Dunya is making another trip to Donbass next week – Tatzhit