Why America is Out of Tricks to Parasite off Global Economies

Translated from Russian by Kristina Kharlova

Fresh data on the size of major global economies is out. Russia, of course, continues to be one of them. According to the CIA we are now sixth, one step above Brazil and one step below Germany. According to the World Bank we are fifth, bigger than Germany, but smaller than Japan:

However, we must remember that the World Bank provides data only for 2014, but more recent data will probably show that Germany is again slightly ahead of us in fifth place.

Perhaps the case of a “wild drop” of the Russian economy and “the lost 15 years” can be closed. Even with the sad 2015, our economy has grown 3.5 times over the past 15 years, and the current crisis pause in growth does not negate the powerful rise of previous years.

Let us now turn to global situation. A list of the twenty largest economies according to the CIA is as follows: 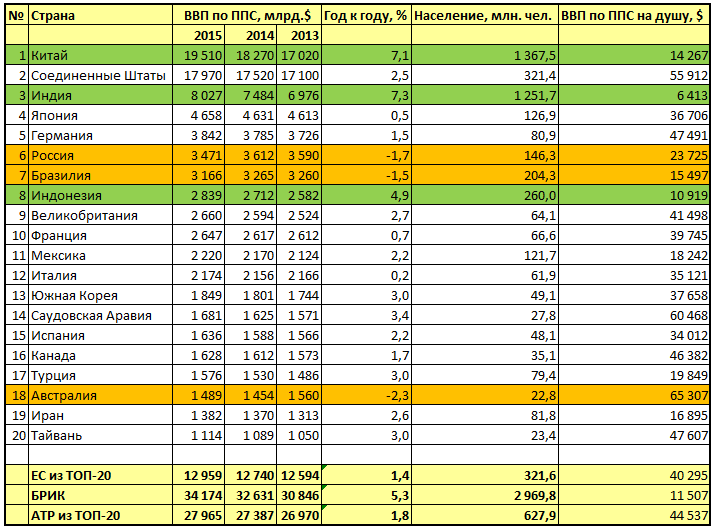 As you can see, the world has changed. If until recently, many believed that everything important happens in the US (and in the US colonies), now that China has become the largest economy in the world, and three of the BRICS countries entered the top ten, it became more difficult to ignore the changes.

The United States, which is used to being the “king of the hill”, is in a very difficult situation. Loss of first place inevitably entails a loss of ability to feed of the ‘dollar levy’ from the planet and the loss of the dollar levy means a complete financial collapse — followed by the need to glue the broken shards of the American economy long and hard.

Of course, this problem became apparent not yesterday and not the day before yesterday. Americans created an audacious plan in advance which in case of successful execution would allow them more time to plunder the rest of the world and stay on the top.

The plan was very simple, and thus it had some chance of success. The idea was to set fire to the planet — and thereby force all the money to seek salvation in the quiet American harbor. Arab spring, ISIS, Euromaidan, ‘Syrian’ refugees, Transatlantic partnership… even if you don’t follow the news closely, you know that last years were pretty hectic.

The main direction of the injection of American poison were the cheap dollar loans, which were distributed indiscriminately — including to Russian companies. Quoting the article of  @crimsonalter , which, by the way, I recommend reading in full:

In several years the Fed was able to hook the entire planet on a cheap currency liquidity. On the background of objectively existing demand of the rest of the world for cheap loans, the ‘addiction’ was a success, and to some extent contributed to the relief of severe symptoms (not causes!) of the first wave of the financial crisis. This is not widely discussed, but even companies from China managed to accumulate dollar loans of nearly a trillion dollars.
In 2015 Americans decided it was time to inflict a lot of pain on the entire planet, and provoked ‘the dollar withdrawals’ or launched ‘the dollar vacuum cleaner’. The rise in Fed rates, a sharp reduction in the availability of dollar liquidity and, consequently, a sharp appreciation of the dollar against all other currencies was to induce in the global (excluding American) economy a deflationary shock, i.e. sharp devaluation of assets, local currencies, stocks, bonds.
The shock was to cause the credit crisis of companies and states, not able to repay their dollar loans. Against this background, combined with the ‘iron’ promise by the Fed to raise the rate further, capital had to flee to America.

Fortunately for us, the American plan didn’t work. The December rate hike by the Fed led to a drop in all markets: including American. Money fled not to the US, but into physical gold. U.S. bonds and American stock market got only the crumbs of the capital.

Meanwhile, Russia, which is nice, was the first to take on the brunt: Americans shut off the tap of dollar liquidity in 2014. As a result, as you remember, there was a shortage of dollars and the ruble has fallen sharply — but the expected crash did not happen, and by now Americans ran out of financial tools to hurt our economy.

What will happen next?

Contrary to the belief of conspiracy theorists, in global politics it is quite difficult to do anything secretly — any serious action requires participation of a huge number of politicians and officials, who are coordinated by the organizers quite openly, through public statements and articles in the media.

This means that if we do not see American “plan B” today, then most likely, there is no plan B. Therefore, we can expect further convulsions — enabling POPS in the US, dull delaying of inevitable collapse and, finally, purifying hyperinflation.

Can’t say I’m upset at this prospect. Global financial system is now stalled, and to break the deadlock without going through severe crisis is impossible. And, it will be fair if the main impact of the crisis will be bared by those states that most actively participated on its creation.

Woman killed during Capitol riot actually urged others to…