From Tatzhit: My profound apologies for the interruption in publication of Littlehirosima stories here. Suffice to say that I had pressing matters to attend to. Now they’re done (very successfully) and “we’re back to our regularly scheduled programming”. This post has two related stories at once, to do some catching up.

I wrote a book. Somehow.

And in February Maria Arbatova nominated it for the National Bestseller award, and it is now on the long list. It was a total surprise for me. That Maria Arbatova knows who I am, the nomination, everything (see Wikipedia article on Arbatova here – ed.).

It’s about the Donbass, and the title is taken from one of my reports: “People live here.”


It’s still in the form of a manuscript, awaiting its publisher (Anyone?).

The list will be chosen by a jury which posts its reviews on the site.

I will gradually publish those reviews. Those which concern me, of course, both the good ones and not so good ones.

You should praise the former and complain about the latter)

I wanted to thank Maria Arbatova for the nomination. Thanks to everyone who helped with the book–Lida, who kept nagging, kept calling, pushing me, and would not leave it alone. I was even afraid to pick up the phone, so I sat at the computer and wrote instead. Thanks to Stepa – for his long talks and rigorous critique of the first draft. Thanks to Lena – who found all manner of mistakes literally at the last minute, when there was no time (I have to admit that I am virtually illiterate and this blog would benefit from an editor). Thanks to all my relatives, and especially the heroes of the book. And you, my dear readers and friends.
Here is the first review. Thank you, Olga:
===

This short book has a quick, almost personal, pulse. Not because of the worry, panic, heart palpitations –  the author’s viewpoint is calm, sometimes even alienated. It’s because war compresses time, so that it’s measured differently. The difference between “here” and “there” is made extremely clear in Sheremetyeva’s reports. Many of us have spent two years in the orbit of the Donbass, even though we are thousands of kilometers from it. It is always right next to us: on TV news, in youtube videos, on the social media. Among daily routine, dishes, dinner, internet, work day after day – this war is always here, whether you remember about it or not. Most people are simply accept that fact, but there are those who can’t bear it any more. They collect money, load their cars with food, medicines, clothing–everything that’s encompassed by the euphemism “humanitarian aid”, and take it over there: to Donetsk, Lugansk, Gorlovka, Pervomaysk. Becoming a different person in the aftermath. Not better, maybe, and not worse – just different.
Nearly all the volunteers post reports on the net. That’s part of their work: they need aid, money, transport, clothing. It’s as hard as knocking on heaven’s gates: the people outside the war zone are tired, they want to hide, they don’t want constant reminders of pain and suffering.
Therefore, every volunteer must find individual tone. Some hope to elicit pity, others appeal to a sense of patriotism or Russian solidarity. But calm elicits a greater response than hysterics. The text’s leanness is more powerful than a flood of words. There is no ideology in Sheremetyeva’s notes, there is no “junta”, there’s almost no mention of Donbass militia.
There is only the boundless astonishment and the child-like question: why? Why did people like you and I – who speak Russian and live in typical houses, who even three years ago had the same hopes and worries, the same problems at work and the same excited anticipation of vacation, the same trips to the restaurant and the evenings with soccer or a blockbuster movie on TV – suddenly found themselves under rocket barrages, under sniper fire, surrounded by minefields?
Why? Because they “wanted Russian wages and benefits.” Because they voted for Yanukovych. Because they held a referendum. Because USSR fell apart. Because they were born at the wrong place or at the wrong time. But the most terrifying answer is: for nothing. Just because.
They are not being killed by space invaders but neighbors. Classmates. Fellow citizens. Relatives in Kiev and Lvov angrily hang up because they don’t want to hear what’s happening, and would rather send money to the killers. The world doesn’t want to know about the Donbass–the world is all clear on the matter. Putin’s aggression, they are shelling themselves, “it’s their own fault.”
Sheremetyeva writes: “It turned out there are different types of people. Those for whom one can feel compassion, and those for whom one must not. Those who express the correct ideas can be listened to. But there are others. Second-class. And this was not something written by far-removed Germans of the 1930s, but my friends. With whom I went roller-skating and with whom I rode on the subway.”
Many have made a similar discovery two years ago.  Which divided the world into “before” and “after”, into “them” and “us”.
But the diary’s author is avoiding the black-and-white temptation to declare one side Good with a capital G, and the other the Absolute Evil. Though it would be easier and simpler.
It’s not like that. It’s not only one side’s soldiers that loot and rob, it happens on both sides, and it’s even worse when it’s your own people. The shelling is not only from one side, the other side shoots too –that’s war. Humanitarian aid is sometimes stolen and sold. Sometimes adult children abandon their elderly parents in the warzone, preferring to hide across the border – and forget, don’t help, don’t even call.

And here, the author climbs an additional rung – she tries not to judge anyone. And that’s hard in our time of blogs and Facebook, of categorical opinions, of old friendships broken over one word. Really hard.
“One mustn’t simply label people as this or that” –Sheremetyeva writes. “Many of the judgmental ones don’t even understand that should rockets whistle above them, they may forget about everything in this world, too. They don’t even suspect they could do something vile just to survive. But, sitting in warm safety, they have lofty opinions of themselves. As I did, when I undertook too much.”

It would seem that’s all obvious truths. But here, the come from someone who experienced them personally. It’s that personal perspective that makes the book’s gallery of portraits – those who haven’t lost their humanity in hell – stand out. Physicians working under fire, orphanage and retirement home workers who don’t abandon their charges, ordinary workers who keep things running despite not being paid in months. Humanitarian aid volunteers. And simply those who strive not to lose their dignity. Who try to live where, it seems, one can only survive.

These subtly documentary, often fragmentary notes have become genuine literature. Because they have a pulse. The multifaceted tradition of Russian wartime prose is continuing. From the memoirs of the Sevastopol nurse Ekaterina Bakunina to the diaries of Yevdokia Sheremetyeva. From the 19th Century to the 21st, the age of comfort, gadgets, and first-person shooter videogames. Alas, we are no longer talking of the past but of the “right now.” And people still live there.

(More reviews can be found on littlehirosima website – ed.)

Well, my dear friends, it all turned out as expected.
Our beauty was not included in the short-list.Close, but not cigar.

Behind the scenes, I harassed the award’s secretary Vadim Levental. He retorted that people like me ought to win a Pulitzer, not a National Bestseller.But as you know,  they tend to give Pulitzers to other people, [who report on the heroism of UAF].
I didn’t even succeed in getting drunk.
At least they said I was pretty. That’s a bonus of sorts. 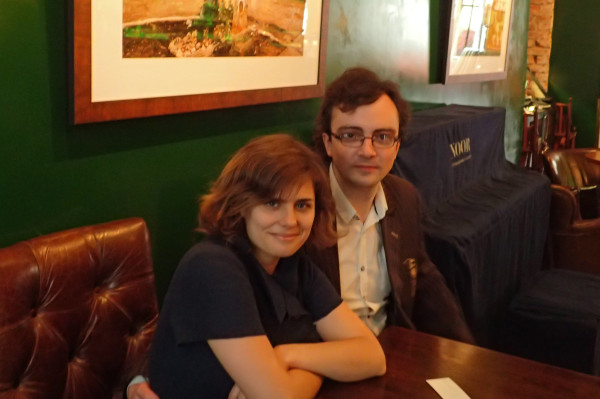