I was stunned and somehow couldn’t resist asking a stupid question:
– How many fathers?

The woman instantly swatted it all back:
– Same one. I gave birth to all of them, no twins.

Apparently I am not the first one to ask such questions.

Maya Valentinovna Zaratuychenko entered the room with a firm, direct stride. I would even call it masculine.
We met at the Lugansk Center for Aiding Single Mothers and Multi-Child Families.

She was followed by a flock of kids, too many to count.
–Should I show documents proving they are mine?
(In order to receive aid from the center – LH).
–No need! Quite a family! Here in Moscow people are afraid to want a second one…

At this point Maya Valentinovna laughed, and in a manly fashion tossed her hair back over her shoulder.
–I also have 6 grandkids! 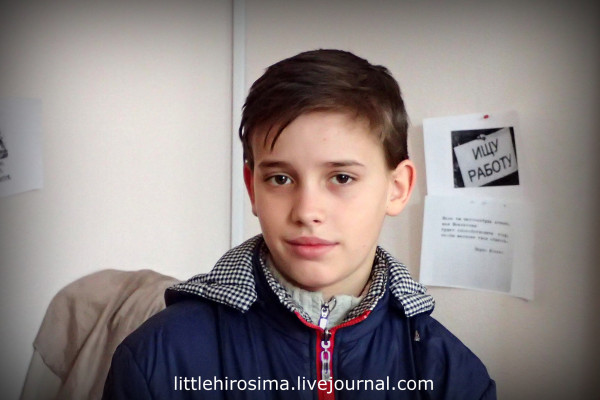 She is 48, and they all live together, except the fully grown kids.
The youngest is 2!
Yushchenko’s government gave this family a medal for having so many kids. And back then, she didn’t even have 10. 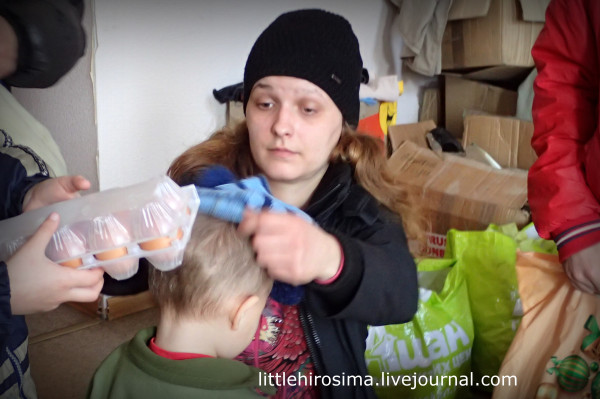 –Were you in Lugansk during the war?

“During the war” – that’s what the locals call the summer and fall of 2014.
Even though the war is not over, they all say, “during the war”, meaning
when there was active shelling.

–Katya, my daughter, and her four kids left. But we spent the whole war
in our two-room apartment. Couldn’t leave. Diana broke her arm when
we were running for cover during shelling. Maya Valentinovna was always working. Her husband still works as a
welder at the October Revolution factory. Though now his salary is only
symbolic. She didn’t complain once during our meeting.
When we delivered the aid, all the kids helped one another. They helped each other dress, helped in everything. Like clockwork.

This is the aid we delivered in April. A standard assortment. We had no idea there would be a mother with 11 kids. 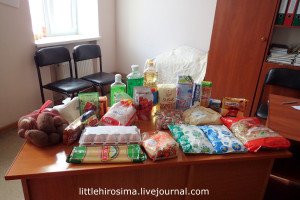 Recently I got a phone call from the Lugansk Zhenya.
–Dunya, there’s a family with lots of kids, a girl named Katya born in
1992. I visited her–really needs help. Husband abandoned her, she’s
raising the kids alone.

It turned out to be a daughter of Maya Valentinovna whom she mentioned at the center.
I’m beginning to get used to the fact there are no coincidences.
Katya had a difficult life. She didn’t want to discuss personal matters, which was understandable.
There are cases like this. The youngest, Nikita, is 10 months old. And
there are three others! And she gets a subsidy of 3200 rubles for the
whole family (!)
[~$50 for family of 5 for a month. Extreme even by LPR standards – Tatzhit] 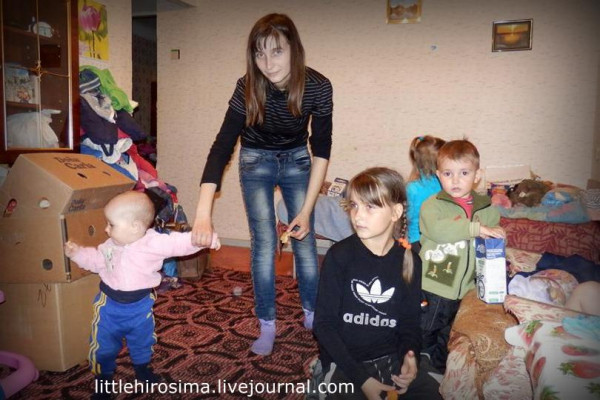 While Zhenya was bringing aid, her mom, Maya Valentinovna, showed up.
I learned she somehow manages to help her daughter using her own
benefits and tiny salary. Katya herself is very thin and welcoming. Dear
Lord, she’s only 24 years old… 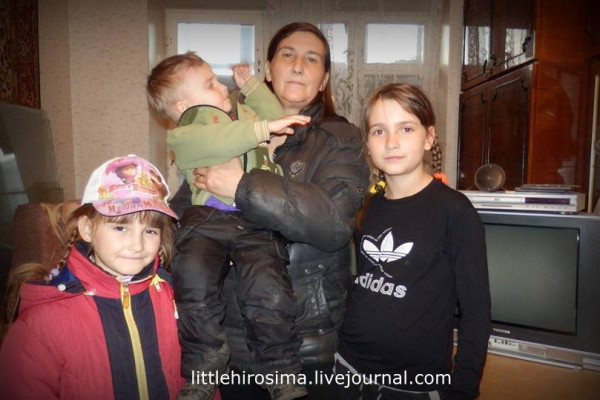 Zhenya wrote back: “This family needs help in every respect. No
refrigerator as such. Which means she always has to cook. No washing
machine. She does the laundry by hand.” That’s with four kids. 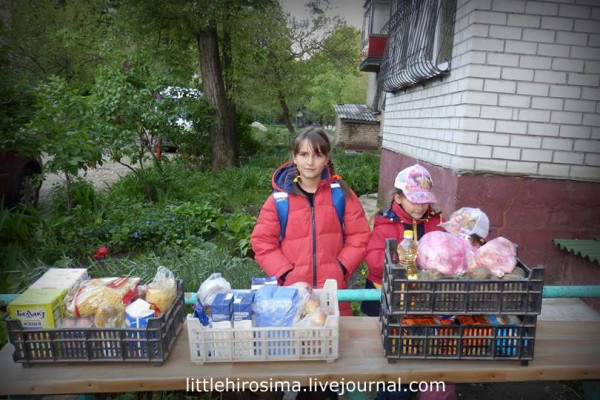 Each post like this is usually followed by dozens of comments about
people who breed like rabbits. Who give birth during war. Who don’t
think, who should have left [the warzone], etc.
There are indeed families like that. Many of them are beyond helping –they drink, don’t even try to find work. And we don’t help them, as
cruel as it might seem.
But Katya and her mother aren’t like that. I don’t know how to explain it.
They are very friendly and loving.
Katya is paying for her mistake in choosing a husband. She can’t work
yet because of her two youngest kids. It’s a hard life but they don’t
complain.

I have many friends who achieved much. Who once had nothing, but now
have everything. Who emigrated, earned millions, and all because of
their energy. Who know what they are doing. Who think through their
every move. Who would never remain in a besieged city. Who would not
give birth at a time like this. Who are awesome.

But not everyone can break through any wall with their heads. Not all can move forward without stumbling sometimes.

My mom also had three kids. It’s not the same as 11 or even 4. But I
remember how we lived in the early ’90s. I remember the humanitarian
aid, my parents standing in lines for it – at night, taking turns, sometimes bringing me along.
My parents are creative and talented people. The fall of the Union was hard on them.

I will never forget how my friends mother, a scientist with a Ph.D. from a top university – ended up
working as a janitor, mopping floors. With her daughters helping her at that job. For years. I
remember how they often dropped in before going to work. They were also a family
with many children.

Maybe my parents also made wrong and irrational choices. I remember
many complicated situations, as a child. When I was embarrassed to wear
my brothers’ hand-me-down, worn-out jeans. When I went to visit a
friend and I saw salami and ten kinds of cheese. When I dreamed of
ridiculous patent-leather shoes, the same as my classmates were wearing. And lots of other things that can’t be explained.
But I exist, and so does my best-in-the-world family, which is the most important thing in the universe. 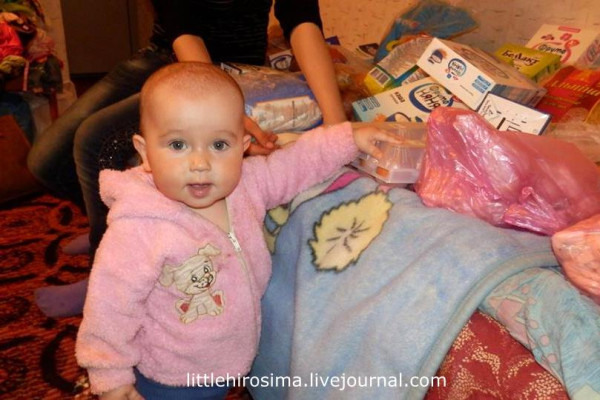 I really want to help Katya. I don’t know–should we try to find her a washing machine?
The war is not yet gone. The war which has hurt that most vulnerable of groups–single mothers with multiple children.
Thanks to all who participate in our aid. Zhenya, thank you for bringing is in contact with this family. If you want to join in helping the people of the Donbass, write me in person through LiveJournal, facebook, or email, or Paypal to the same address: [email protected]