Is there a connection between the recent conflict in Nagorno-Karabakh and other regional and international events (the Caucasus, Ukraine, Afghanistan, and the Middle East)?

There is a link but it is not decisive. The aggravation of the Nagorno-Karabakh conflict (NK) is part of the ongoing confrontation between Russia and the Western forces in other theaters mentioned above, but it mostly burns on its own internal fuel, ie the inertia of a conflict unresolved for more than 20 years, during which the two sides have used an increasing war-propaganda, with the Azeri side especially emphasizing how the NK status quo is unacceptable to them.

In your opinion, which of the major external actors have an interest in this conflict (the US, Europe, Russia, Turkey, Iran)?

Again, the causes of the conflict are primarily internal and practically all the external mentioned countries are interested in maintaining the status quo along the Line of Contact NK (LoC), since not changing the existing deadlock is more of advantage to them. In particular, the EU has hardly similar intentions considering that its institutions and Member States are already quite concerned about the interlocking crises of terrorism and refugees and the ongoing conflicts in Ukraine and Syria.

Many speculations have been made these days (as during previous acute phases in 2015 and 2014) about possible Russian interest in an escalation, as if promoting and exploiting the hostilities may help Moscow consolidate its influence in the region – with the purpose of placing peacekeepers in the area and highlighting the role of Russia as an indispensable mediating power in the Caucasus. This does not seem appropriate in the current situation of over-extension of Russian power, even if it remains a clear Russian interest in the use of NK, to influence the Azeri position, to discourage Georgia becoming further open to NATO (especially after the creation of the center of the NATO training center) and in the supply of gas  to Europe, in line with the general face-off between Russia and the West.

But still, right now Moscow is uncomfortable when choosing between Azerbaijan and its important political ally Armenia which constitutes a significant piece of its regional strategy.

If we had to find an external actor interested in an escalation of the situation, this could be Turkey, with some support from the “hawks” of the United States in opposition to the line followed by the Obama administration.

After the deterioration of its relations with Russia, Turkey began again to be active in the region, in line with the forces of US imperialism and in this perspective has greatly increased its diplomatic activities both in Tbilisi and in Baku.

The Azerbaijan position is of utmost importance for Ankara. In Baku, the confrontation has opened a rift between the pro-Russian and the pro-Turkish factions. In this regard, the position of the Azerbaijani army appears particularly sensitive, although the ‘author (of this article) has no information about the alignment of forces within the army. However, it seems reasonable to assume that the pro-Turkish faction (with its sponsors in Ankara and Washington) sees the Aliyev family as the main guarantee that Azerbaijan does not tend toward the Turkish-Western camp. Last week in Washington, with his first visit in a decade, I. Aliyev won a major victory, after more than a year of extensive and harsh Western criticism on the human rights violations of his regime. Here in Washington, his last wish would be to start a war.

The main factor to remember is that the east-west corridor linking central Europe to Asia through the Caucasus is a vital artery for Washington’s project of dominion. Several high-level US delegations have visited Azerbaijan lately. In the realignment of forces after the last escalation, the US position in regional affairs has been improved. In this perspective, there are also odds that the Western forces mentioned above have as their objective the summit between the foreign ministers of Russia, Azerbaijan and Iran held in Baku today (April 7), an event that can open a new page in the developments of the Caucasus.

Do you think that this conflict could involve Daesh combatants and those of other terrorist organizations? And, in such a case, in the interest of which of the major geopolitical players?

Judging by the historical precedent of the 1988-1994 conflict, when many mercenaries from Afghanistan, Chechnya and Turkey fought for Azerbaijan, one can expect today that Islamic terrorists may move into the region to fight. This is mainly because Erdogan’s Turkey has become an active sponsor of these networks. However, in previous years, Baku has actively restrained the internal clandestine Islamist movement, so you can expect that Azerbaijan will strongly resist an Islamist military participation. Provided, of course, that a real war doesn’t get going in NK.

Some experts believe that the development of the conflict could affect Russia, Turkey and Iran. What do you think?

Again, if full-scale war resumes in NK, all neighboring actors will be forced to take part and be involved, if only to mitigate the humanitarian consequences. For the rest, see above.

What impact could the situation in Nagorno-Karabakh have on neighboring countries, especially Iran?

As said before, Iran’s territory is contiguous to the combat zone and will be immediately involved, as evidenced by the fighting last week. As in the case of Moscow, in the event of prolonged conflict, the diplomatic position of Tehran will become difficult as Iran may have to abandon its position of equilibrium between the parties, which it has been following for years. In particular, with a transit passageway via Georgia being closed, Tehran could be pressured by Russia to open its territory for transit of Russian military supplies, their only option is to go from the north of Iran.

A prolonged crisis will have serious implications for the stability of the Caucasus, first of all for Georgia, whose position as the region’s main Western ally makes it particularly vulnerable. Georgia has so far enjoyed its position of equidistance between the two parties, but this role seems more and more difficult to maintain as Tbilisi strengthens its ties with Ankara, which implies an implicit support to Azerbaijan’s strategy of blockading Armenia.

Moreover, Tbilisi may object to the requests of Russia to open its airspace and land for military movements, with the prospect of diplomatic pressure, economic, political or military in the case of further escalation in NK. In particular, any escalation would impact heavily on Georgia’s internal affairs in terms of inter-ethnic relations, both between the ethnic-Armenian community and the Azeri communities living in contact in the border districts of Samtskhe-Javakheti and Kvemo Kartli, where on the political scene the forces that are worried over Turkey’s growing influence and who lobby for a change in the foreign policy will receive a decisive boost in the general election of October.

But most of all Tbilisi fears possible Armenian retaliation that may affect oil and other important regional transport crossing its territory. (1)

For its part, Baku could also try to sabotage or ask Georgia to close the Main North-South gas pipeline that connects Russia with Armenia.

How do you assess the role of international and regional organizations (including the Collective Security Treaty Organization (CSTO), seeing that Armenia is a member) in the resolution of this crisis?

The crisis has accelerated the decline in the influence of the Western multilateral institutions in the region. First there is little account of efforts of the OSCE Minsk Group, which included the United States with European participation.

The same can be said for the CSTO, whose role is questioned given the theoretical guarantees of defense, but leaves aside the military assets of Armenia in NK. After the escalation of last summer, the troops of the CSTO Peacekeeping gathered in Armenia to participate in the “Enduring Brotherhood – 2015” joint military exercises that have followed a realistic scenario entitled “Preparations and conduct of a peacekeeping operation by the CSTO Collective peacekeeping Forces in the Caucasus region.”

This says a lot about the willingness, at least from the Russian point of view, to use the capacity of the CSTO to deploy troops in NK so as to break the deadlock that has gone on for for 21 years in NK and which allows the return of parts of seven Azeri districts occupied by the Armenian forces outside Karabakh, thus strengthening the Russian influence on the conflict in NK outside the Minsk structure.

However, now as then, the negative attitude of Kazakhstan and other countries of the CSTO (mainly Turkish-speaking) has given a clear sign that they do not want to act in a similar scenario and against the will of Baku.

On the other hand, the new situation seems to open some maneuvering room in favor of the Shanghai Cooperation Organization (SCO), Euro-asiatic based. This as a result of Azerbaijan getting interlocutor status with the SCO, a status that Armenia already had. Consequently it is assumed that the SCO can increase its involvement in the Caucasus. Surely in the June summit in Tashkent, Baku will use this forum to raise the issue of Karabakh and urge Yerevan urge to respect its territorial integrity and sovereignty, according to the fundamental principles of the Charter of the SCO.

(1) At the height of the crisis. President S. Sargsyan stated that “Armenia will have to take some retaliatory action so that the opponent does not think that his cocky behavior will go unpunished”, which “could take the form of catastrophic consequences.” 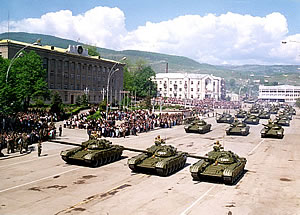 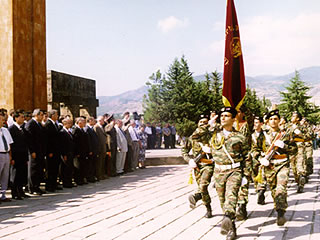 _______________________
*I have not been able to find the original anywhere, but found the analysis interesting enough that I just translated the Italian. I confess not knowing who is asking the questions, or who is answering.

Putin to the Magués: “You are the best ambassadors of the French people”